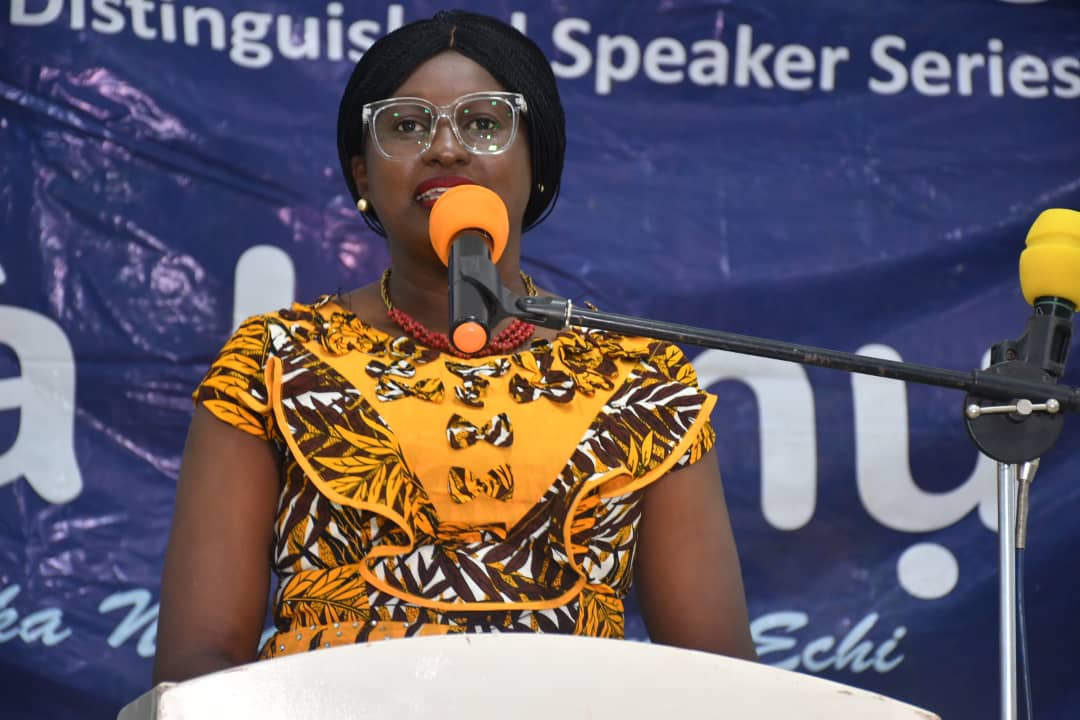 A hands-on delivery by Uchenna Onwuamegbu-Ugwu, the award-winning tech teacher at Regina Pacis Girls Secondary School, Onitsha, was warmly received last night at the Enugu Sports Club where she urged an audience of parents and activists to make greater efforts to close the ever-widening gap in tech education between their children and the rest of the world.

She was the distinguished speaker at the October 2019 edition of Nkata Umu Ibe lecture series.

The lecture hall was filled with only a few men but with lots of youth, children, mothers, and female activists. The Speaker expressed her delight at seeing mothers and activists who are two of the strongest pillars to lean on for practical action on Mentoring our Youths to Greatness, the theme of the monthly lecture organized by the Enugu Centre for Memories Museum.

While expressing delight at seeing women and children, she however stated that the intervention of the menfolk could decisively influence efforts to close the identified gap in STEM education.

Her speech highlighted two realities of the current situation that she also took time to interrogate: a huge and growing gap in modern education for young people living in the South East; and the pain of seeing that most parents and policy makers are oblivious of the impact of this gap on the ability of the children to effectively compete in a modern world.

“I’m not satisfied with only five children that we were able to guide to a Silicon Valley triumph in the United States,” she said.

“I want to get millions more to embark on the same journey. Everybody must be involved. One person alone cannot do it.” The words that she used, again and again, to communicate what parents must do are “intentional acts” (deliberate, planned, premeditated, calculated efforts) by four key actors, namely, parents, managers of educational institutions, policy makers in education, and individuals blessed with resources to help.

Below are six of her recommendations on how parents and affluent individuals could get involved in the efforts to close the great gap in tech knowledge for children of the South East:

She feels that in addition to or in place of lavish birthday celebrations for children, parents could come together to organize intellectual funfairs. As a key part of the funfair, or carnival as she prefers to call it, the organizers could invite achieving Igbos to give pep talks to kids and have their imaginations fired up. All children need is to have their imaginations fired up; the impact this will have in getting them to adopt the right set of values and to efficiently compete in the real world will be positive and far-reaching, she said.

2. Celebrate the right values through recognition of achieving individuals

Igbos who have recorded solid, verifiable achievements ought to be celebrated, more than those who have pots of money but whose sources of income are not verifiable, she said. Young minds are impressionable, and the earlier we move away from celebrating the wrong set of people and focus on the ones that build sustainable societies, the better it will be for producing children with right values to govern our future.

3. Recognize the power of information you are inadvertently hoarding

Most widely read and widely travelled parents, uncles, and friends of families sit on goldmines of information, without realizing that the information they have absorbed could give a brilliant but indigent child a scholarship, could redirect a brilliant child on the path to scholarship and a bright future, and could point the not-so-brilliant on the path to make decent grades and make informed choices about their future. Information is power, Mrs. Ugwu said, as she pleaded with adults in the audience to ensure that they always share information of value with every child that needs it in their neighborhoods.

4. Buy the right gifts for children

Many parents, including those that are struggling, want to impress their children by buying them expensive toys. Many of those who travel abroad return with chocolates to share to the children, she said, provoking laughter in the audience. In a solemn voice, she counseled those who travel overseas to consider also buying education and learning tools as gifts for their children and children of the other. The way she explained it, the audience was left in no doubt that she considered gift of learning tools, from the famous Chinese saw, as a way of teaching children how to fish, while handing out chocolates amounts to giving the children fish.

5. Educate and empower disadvantaged parents to help their children

In recalling the difficult days of growing up, Mrs. Onwuamegbu-Ugwu spoke of the many times that her mom considered selling bags of rice that family friends brought home and shared during Christmas. She would always consider selling the rice gifts to raise money to pay school fees for her and her siblings. This experience led her to believe that many well-to-do parents in the community could do better to organize entrepreneurial workshops to empower disadvantaged women in communities, in addition to or in place of perishable goods that they often shared to the women.

6. Parents are the Number One mentors for their children

She explained this with the Igbo maxim: “Nne ewu n’ata agba, nwa ya a’na ekili (when a she-goat chews the cud, her kid watches to learn). In this respect, she says that parents are the Number One mentors to their children; what each child grows up to become will inevitably be shaped by the experiences they have had with parents – good or bad. The urgent task for every parent is therefore to ensure that the experience they communicate to the young is good, inspiring, and achievement propelling. The sobering reality of the situation, she said, is that parents don’t really have to say anything to their children to communicate an experience. It is what they do in front of them, what the kids see, read or hear from parents that communicate an experience and shape their outlook.

The distinguished Nkata Umu Ibe speaker last night, Mrs. Uchenna Onwuamaegbu-Ugwu, born and bred in the Coal City, is an award-winning ICT teacher based in Onitsha. She mentored five high school students to not only win every tech innovation tournament they competed for in Nigeria but also to a grand entry in Silicon Valley, United States, where the girls also won gold at a world tech innovation competition. Through her efforts, the world took notice of Nigeria via Onitsha, a hitherto unlikely setting for a tech revolution in the South East. Her speech at the Club was an admixture of practical, hands-on, sometimes emotional outpouring of knowledge, experiences and actionable suggestions that she delivered with authority to appreciative listeners. The audience spontaneously rose to its feet to reward her with a standing ovation when she was done.