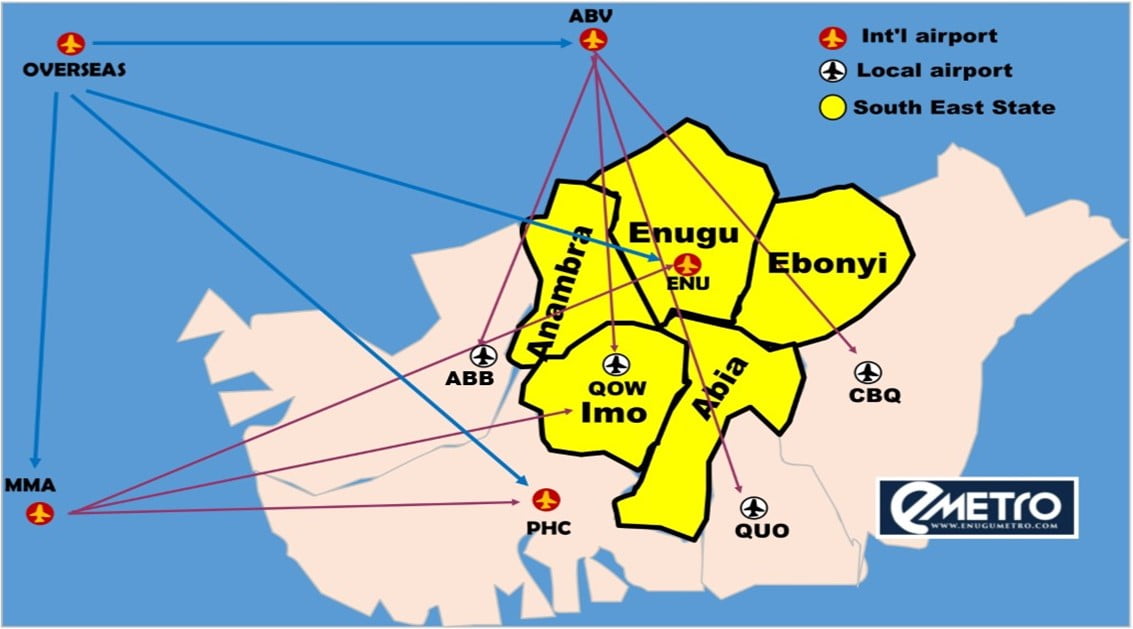 The Southeast Region of Nigeria comprises the five states of Abia, Anambra, Ebonyi, Enugu and Imo States. It is one of six regions in Nigeria whose idea came into effect in 1995.

How Nigeria’s six-zone structure came to be

The idea of a six-zone structure for Nigeria came from a suggestion by former Vice President of Nigeria, Dr Alex Ekwueme at the 1995 National Constitutional Conference (NCC) in Abuja. Ekwueme gave the idea in a paper that he presented to the Committee on the Structure and Framework of the Constitution during the conference. He proposed a just and equitable power sharing in Nigeria based on the six geopolitical zones. He firmly believed that this was the key to maintaining a stable Nigerian polity.. Politicians have seized on the idea to organize along regional lines in their quest for power and resources.

The five states of the Southeast region are majority Igbo ethnic group. Residents understand and speak either the Onitsha or the Owerri/Orlu dialects. Igbo who live in Enugu and Anambra speak the Onitsha dialect. Citizens who live in Imo and Abia States speak the Owerri/Orlu Dialects. There are minority Idoma population in Enugu. There is also a minority Igala population in Enugu and Anambra States. In Ebonyi, there is a mix of mix of Igbo and Korring dialects spoken in some parts of the State that are familiar with Kukele (Cross River) and Utonkon (Benue) languages. Among its neighbours, however, there are significant Igbo populations in Rivers and Delta States, and notable others in Cross River, Akwa Ibom, Benue, Kogi, and Edo States.

Creation of Southeast States in Nigeria

The Southeast evolved from the area originally known as East Central State, created on the eve of the Civil War on 27 May 1967. East Central was carved out of the former Eastern Region of Nigeria. On 3 February 1976, another military regime further split East Central into Anambra and Imo States by the military regime. The old Anambra was further split into Enugu and Anambra, with a small part (Abakaliki Division) added up with Afikpo Division from old Abia to form Ebonyi State. Imo was also subsequently split into Imo and Abia, with a small part (Afikpo) added to Ebonyi State.

Here is the sequence of dates where the states came into being:

How Southeast States got their names

How the southeast states of Nigeria gods yeah and names first stop there is a unique naming conversion for all D5 southeastern states in Nigeria. The island named for hills rivers call compilation of names off tribal groups in the region just stop they are as follows

ABIA: The military created Abia State on created on 27 August 1991. The motto of Abia State is “God’s Own State.” This was a coinage recognizing that the name Abia appears in the Christian Bible. The name was not taken from the Bible. Abia is rather an acronym derived from the five old colonial divisions in the state. The divisions are Aba, Bende, Isuikwuato, and Afikpo. However, the military thereafter excised Afikpo and added to Ebonyi State in 1996. t has retained its original name, with the biblical twist to continue to make it relevant.

ANAMBRA: this state got its name from the Omambala river. Anambra is a corruption of the name Omambala.

EBONYI: like Anambra, Ebonyi is also named after a River, variously called Aboine and Aboinyi. The Ebonyi River cuts through Abakaliki, the State Capital.

ENUGU: Enugu is another anglicization of Enu-Ugwu (hilltop). The name was derived from the virgin territory that colonialists constructed in the valley of the undulating Udi hills. The mining engineers that came to prospect for coal set up camp at the top of the hill, leading the miners to call their abode Enu Ugwu. The name eventually stuck, and the Coal City was born as Enugu.

IMO: Like Anambra and Ebonyi States, Imo is also named after a River – the Imo River.