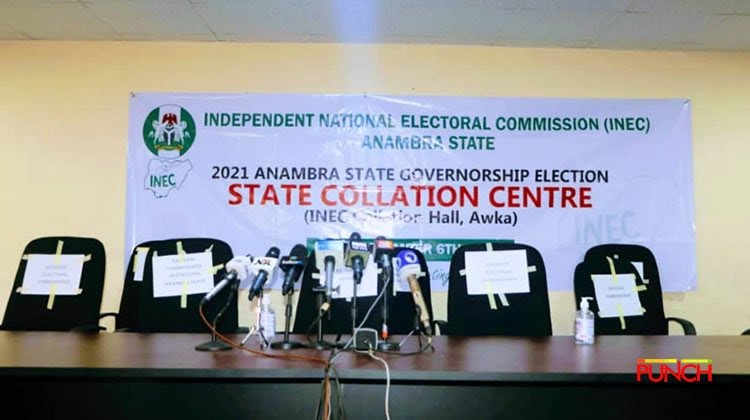 APGA in command after Orumba North

Independent Electoral Commission (INEC) says it will suspend result of Anambra Governorship election in order to conclude with Ihiala LGA.

Accordingly, it has fixed supplementary elections for the local government for tomorrow Tuesday, 9 November 2021.

Returning Officer, Prof. Florence Obi said it is important to conclude the process with Ihiala to satisfy constitutional provision.

The law requires a candidate to score a quarter of votes (25%) in two-thirds of local government areas to win.

The party maintained its winning streak in Orumba North with 4,787 votes, ahead of APC which placed second with 2,672 votes.

Although a winner is obvious at this point, INEC says it must hold a supplementary election in Ihiala LGA before declaring one.

The final standings of the parties last night, in terms of overall performance, are as follows:

Enugu Metro has tallied the votes cast yesterday and declares the 2021 Anambra State governorship election turnout as the worst in history.

The results released so far show that less than 10% of registered voters voted across the state.

Voters who came out yesterday were less than 50% of the turnout in the last governorship election that took place in 2017. Yesterday, a fearful populace kept away from an election in which over 2.5 million people registered to vote.

Although the final tally is not yet known, the results announced so far were quite abysmal, after counting 19 local councils.

The frontrunner himself was not able to muster up to 100,000 votes, with results from 19 of the 21 LGAs already announced.

In total, only 204,348 registered voters came out to cast their ballot. In relative terms, this total number of voters is less than the 234,071 votes that Governor Willie Obiano garnered to win his election in 2017. A total of 448,771 votes were cast in the election that year. The runner up in that election also scored 98,752, which is more than the total haul of the winning candidate in this election.

All Progressive Grand Alliance (APGA) got 47 percent of the votes announced so far, followed by the PDP at a distant second with 24% of votes cast.

The All Progressives Congress (APC) managed to scratch out 19% of the votes. Although it is in third place, the YPP at a miserly 10% was able to win a local government area. APC lost all, including Aguata, the local Government of its flagbearer.

Getting set for a big announcement

Two LGAs are holding up announcement of a winner in yesterday’s Anambra State Governorship Polls – Orumba North and Ihiala LGAs.

Enugu Metro reported before that election did not hold in Ihiala local government.

The Returning officer for Orumba said that he was forced to sign the election results under duress.

He accused security men of threatening him and even firing tear gas to force him to sign the results.

No election in Ihiala

The LGA has 300 polling units.

INEC has not said how it will handle the situation.

The current standing of the parties is as follows:
APGA 17 LGAs
PDP 1 LGA
YPP 1 LGA
Ihiala LGA – No elections.

Anambra has 21 LGAs. There is only one LGA result left, discounting Ihiala.

The results, as announced by INEC

Winner of governorship polls to be named today

The results are being collated at INEC Office in Awka right now, officials said.

The State resident electoral Commissioner yesterday invited stakeholders, including the media, to INEC State office, Awka to witness the exercise.

INEC said yesterday that it would allow voting spill over to a second day wherever machines didn’t allow voting.

This was a quick response to widespread reports of malfunctioning vote-capturing machines.

Consequently, the agency extended voting window to 4.00p.m and directed that anyone on queue at that time be allowed to vote.

The Agency however confirmed last night that no such incidents were recorded. It also promised to pay close attention to situation reports from the field.

Officials said last night that reports from staff and independent monitors suggested that all voters that turned out voted.

All three frontrunners showed strength in their polling units, as follows: