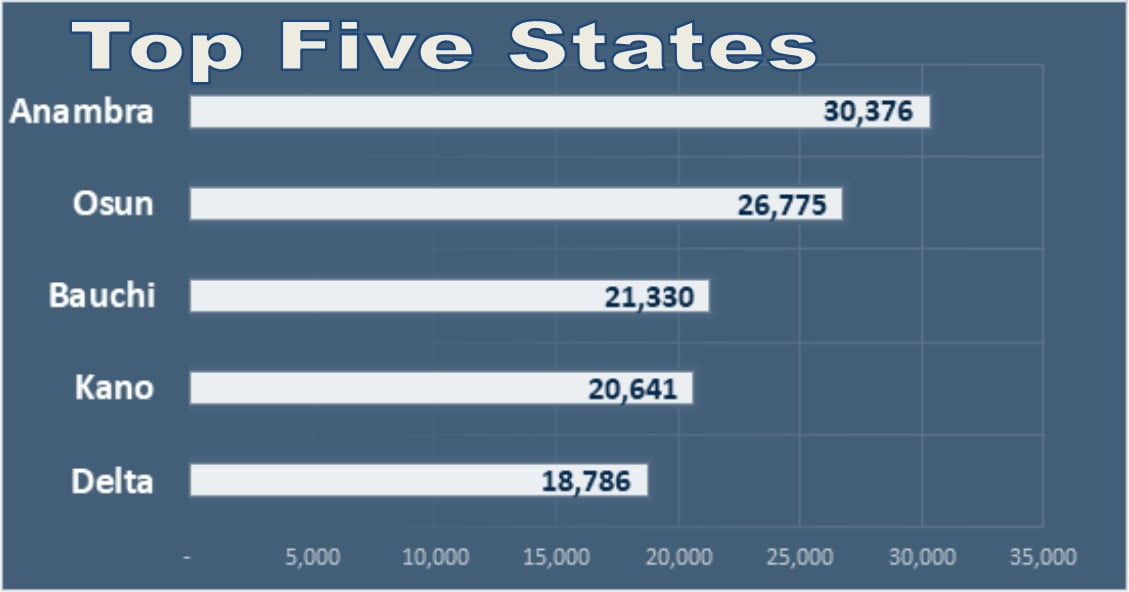 Anambra State leads the nation in new voter registration while next-door neighbor, Enugu, flops at the bottom behind other states.

Over 30,000 Anambra voters have registered in the exercise flagged off on 28 June by the Independent National Electoral Commission (INEC).

Predictably, the South East continues to retain the last position.

However, no region dominates the top five states, going by figures released by INEC at the end of registrations last week.

Anambra placed South-East on top, followed by Osun for South-West, Bauchi  for North-East, Kano for North-West and Delta for South-South.

Nevertheless, this South East performance is a fluke, as the remaining four states are struggling at bottom of the table.

Enugu’s performance, for example, is so bad that the difference of 3,601 between Anambra Osun is almost the entire number that she registered within the period.

Anambra’s performance therefore turned out to be the redeeming grace for the South East, as the rest recorded embarrassing numbers.

It has been suggested that restiveness in the south east accounts for the poor registrations. However, the performance from Anambra contradicts this.

Analysts said yesterday that the 6 November 2021 governorship election could be responsible for the upsurge in voter registration.

Governor Willie Obiano (APGA) is concluding his second term and set to relinquish power to a successor in February 2022.

Already lined up to contest for the position are three formidable opponents who bring different strengths to the polls.

They include Prof. Soludo who is being sponsored by Obiano as successor, Chief Valentine Ozigbo (PDP) and Chief Andy Uba (APC).

A total of 17 parties fielded candidates to contest the 6 November 2021 governorship election in Anambra State.

There are however other suggestions that the new registration process helps a lot more people not only register but to also choose their voting points and state.

“You can be in the FCT and register to vote in Anambra State,”an official explained to Enugu Metro.

“It is also possible to update your voter’s card and choose where you want to vote through this online electronic process,” an INEC staff said.