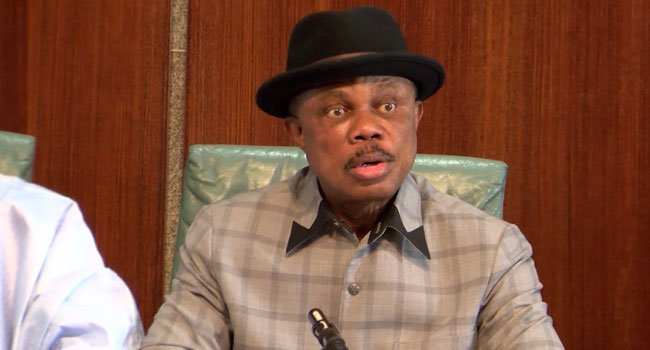 The anti-corruption agency arrested the former governor on 17 March in Lagos. He was flown to Abuja the following day for interrogation.

Consequently, tasked the Agency to “treat Obiano with due civility and immediately restore him to his personal comfort.”

They also appealed to the President and his Attorney General to call the EFCC to order over the humiliation.

The rulers poured out their anger in a statement personally signed by their Chairman, Igwe Alfred Achebe, Obi of Onitsha.

They described the trending video as both “distasteful and reprehensible.”

“We are equally disturbed that such a video clip found its way out of a highly secured environment of the EFCC onto the social media.”

They said it also embarrassed the people of Anambra State State who he governed until three days ago.”

They also said the video is “absolutely dehumanizing” and does not bring any value to the EFCC investigation.

He announced this at the 5th Annual General Assembly of the Network of Anti-Corruption Institutions in West Africa (NACIMA).

Although Bawa did not disclose the conditions attached to bail, journalists speculated that it came with stringent requirements.

Among them is that Obiano produces two senior Federal Public Servants with verified landed properties in Abuja as sureties.

At the time of filing this report the former Anambra governor is yet to regain freedom from the EFCC custody.

Agency officials picked up Obiano on 17 March, same day he handed over power to Governor Chukwuma Soludo in Awka.

Reports say Obiano was travelling to Houston in the United States whe Agents intercepted him.

Obiano and his family l in Houston from where he returned to contest for governor.

The EFCC has yet to publicly share with the public why they picked up the former Governor for questioning.

The Agency however announced in November 2021 that it had placed the Governor on a watchlist.