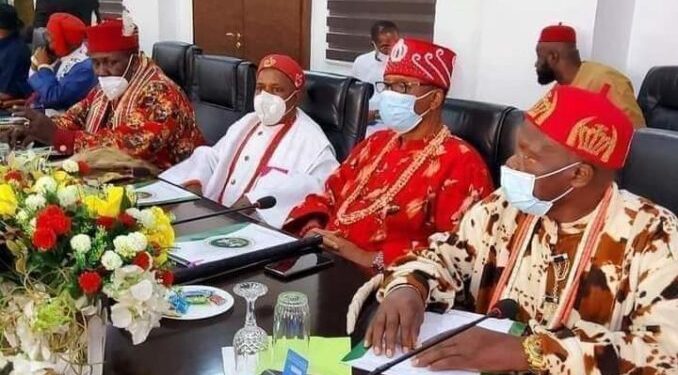 Anambra State picks Monday, 4 April 2022 as Day of Prayer For Peace in a bid to end Mondays sit-at-home in the Southeast Region.

A coalition of traditional rulers, church leaders and the Anambra State Government officials settled on the date today.

The gesture, they said, will “douse the current tensions across the Southeast and create an atmosphere for collaboration toward a constructive resolution of the issues.”

The group asked citizens of the region to join efforts to end the sit-at-home which IPOB declared ended since August 2021.

“We declare Monday, April 4th, 2022 as a Day Of Prayer For Peace for Alaigbo.

“We implore Ndi Anambra and all religious congregations to join in this important day of Prayer.

“It will take place within the premises of the Cathedrals, Churches, and prayer houses across Ala Igbo by 11:00 a.m.

“We enjoin the faithful wherever you may be across Nigeria or abroad to pause and join in fellowship as we seek the face of our Father.

“It is the expectation of the Joint Body that the conclusion of the prayer session shall mark the end of sit-at-home in Anambra State and the Southeast region in general.”

Other signatories are Igwe Laurence Agubuzu, Chairman, Enugu Traditional Rulers Council, and Most Rev. Chibuzo Opoko, Secretary and Representatives of Archbishops and Bishops.

Their statement followed Gov Soludo’s consultations with relevant groups in the state to end the notorious sit-at-home.

The Joint Body decried the Monday Sit-at-Home as an “ill-advised and counter-productive” way of advocating for a cause.

“All over the world, it is our inalienable right to make demands, make our voices to be heard, make agitations against perceived injustice and the reality of marginalization.

“It is however totally unacceptable to stop our children from going to school, to destroy our means of livelihood, to kill, maim or recklessly destroy properties of the so-called potential beneficiaries of the struggle, to make our economies unattractive to investors, and to create an environment in which our youth have little hope of realising their legitimate dreams and aspirations for jobs and wealth creation.”

The Joint Body asked “all criminal elements masquerading as working under the instruction of IPOB or ESN to cease and desist from further acts of violence and criminality or face the implacable force of law and order”.

Drop your arms, it urged all who seek resolution of their grievances through armed struggle and victims of the insecurity in Anambra State in the past three years to “step forward and cooperate with the Truth and Reconciliation Commission that will be inaugurated by the Anambra State Government next week”.