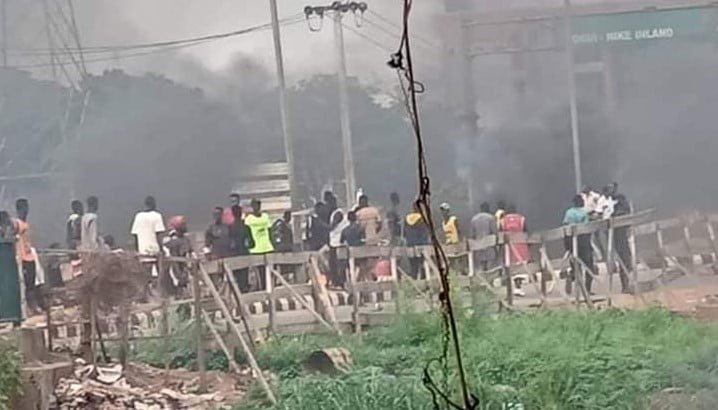 Government and Police authorities react to yesterday’s Enugu clash between shop occupiers and landowners at the New Artisan Market.

In separate statements, the authorities supported the attempt by landowners to repossess an area of land encircling New Artisan Market.

In its statement, the State Government said the property was “illegally occupied by traders, particularly livestock dealers from the North,” and that the rightful owner is “the family of a revered traditional Ruler and Statesman, late HRH Igwe Gabriel Nnaji (Nwajanja).”

This Government position confirms speculations last night that authorities knew and also sanctioned the botched attempt to repossess the land.

The State Government Statement claimed that New Artisan Market traders were briefed on the judgement and plans to demolish stalls.

“The Enugu State Government, law enforcement agencies and the leadership of the predominantly Hausa merchant community of New Artisan Market were duly briefed on the intended execution of the judgement and its implications.

“In line with good conscience and utmost regard for human dignity, a robust plan was set in motion to resettle these traders whose importance to the economy of the State cannot be underestimated,” government said.

Oruruo accused the traders of “acting under the cloak of a demonstration while surreptitiously and unlawfully disobeying an order of Court.”

On its part, Enugu State Police Command said citizens were injured while vehicles were burnt or vandalized by “unscrupulous elements.”

The traders, he said, set off bonfires, “obstructed vehicular movement, injured unascertained number of persons, vandalized two caterpillars that had gone to carry out the demolition exercise and set ablaze three vehicles.”

Police have restored calm in the area, after arresting five suspects for questioning in connection with the disturbances, Ndukwe said in the statement.

The was signed by Daniel Ndukwe, the spokesperson and an Assistant Superintendent.

Leaders of the market traders who spoke to Enugu Metro on condition of anonymity said they were fed up with the inconsistencies of the State Government.

In particular, they pointed to inconsistent government policies that have seen them moved from one location to another within the metropolis.

The authority however said in a statement that traders continue to do business in the area in defiance of a government order to quit.

“Recall that the state government had in some years past shut down the new Artisan Market,” the statement added.

Questions were raised last night about the motive behind deploying awesome military and police firepower to enforce a court order on land matters.

Eyewitnesses wondered whether it was possible for an individual to mobilize both army and police to enforce a court judgement.

“Only a state government could have mobilized the army to enforce a court order over a piece of land,” one said.

“The State Government definitely has a hand in this,” said another witness who claims to be a barrister.