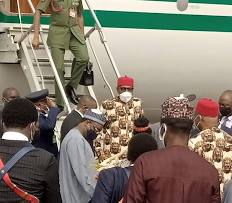 The show of strength happened when a presidential jet bearing Gen. Buhari touched down Owerri airport this morning.

On hand to receive him were host Governor Hope Uzodinmma and Gov. Dave Umahi, chair of the South East Governors Forum.

Both Governors are members of President Buhari’s political party, the All Progressives Congress (APC).

The Presidential jet touched down the Sam Mbakwe International Cargo Airport at 9.30 a.m this morning.

The President was therafter guided to the venues where he commissioned projects executed by Gov. Uzodimma.

Among the projects he commissioned were the Naze-Poly Nekede Road and Balloon Technology Drainage Tunnel at Dick Tiger Road.

The projects commissioning were all done within the State capital and were conducted under extra tight security.

Observers noted that the President’s visit was to show leadership to South East Governors who appear to have buckled under threats by IPOB youths.

The Indigenous People of Biafra (IPOB) operatives imposed another sit-in today throughout the South East region.

The order followed with the usual threat to ruthlessly deal with south east residents who step out of their homes.

They also said the President is no longer welcome to the Southeast as long as their leader is in detention.

Eyewitnesses from the five states report that most people have resigned to IPOB’s threats of sanctions.

“It’s not that people cannot go out,” a government information manager said today.

“Our people are asking themselves if it’s worth it to be beaten up, wounded or killed by these boys who clearly know not what they are doing.”

“The President came here and left without any one coming to accost him or even carry placard to protest along the way,” said another Imo official.

“That shows you how much these threats are worth,” he said.

Enugu Metro learnt that President Buhari has since concluded the tour and returned to Abuja.