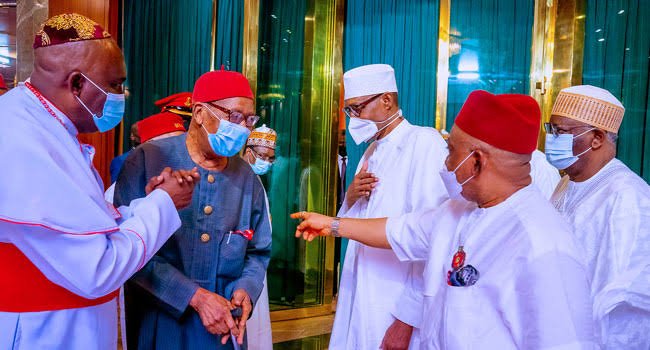 A presidential spokesperson gives an official version of the President Muhammadu Buhari position on calls for release of Mazi Nnamdi Kanu.

Amechi painted a bleak picture of the region’s socioeconomic landscape devastated by fallouts of separatist agitations and security conflicts.

Thus, the instability destroys social harmony and business operations, and also disrupts children education in the region, he said.

He made a similar pitch as Ohanaeze and Bishops in the region for the President to release Kanu to them.

The President promised to reflect on their plea but emphasized that their request is a tough call.

He however presented two hurdles against the political solution they sought.

According to him, these are the doctrine of separation of powers and Kanu’s eagerness to constantly denigrate Nigeria.

“You’ve made an extremely difficult demand on me as leader of this country.

“The implication of your request is very serious.

“In the last six years, since I became President, nobody would say I have confronted or interfered in the work of the Judiciary.”

On Kanu’s personal conduct, he said this:

“When Kanu jumped bail, got arrested and brought back to the country, I said the best thing was to subject him to the system.

“Let him make his case in court, instead of giving very negative impressions of the country from outside.

I feel it’s even a favour to give him that opportunity,” a spokesperson said, quoting the President.

Chief Amechi had earlier promised that if handed over, Kanu will tone down his incendiary rhetoric against Nigeria.

Here’s how the NTA reported the visit.

Kanu is struggling to extricate himself from a seven-count criminal charges, including for sedition and treason.

The case suffers several delays from an Abuja High court presided over by Justice Binta Nyako.

On 10 November, a momentary lapse from lawyers representing Kanu led to yet another postponement to 19 January 2022.

One of the lawyers at the weekend asked two world powers and the United Nations to pressure the Buhari regime for Kanu’s release.

The lawyer claims that Kanu suffers from a strange ailment that defies a medical solution.

Buhari position on Mazi Kanu and pleas for his release from detention and trial.