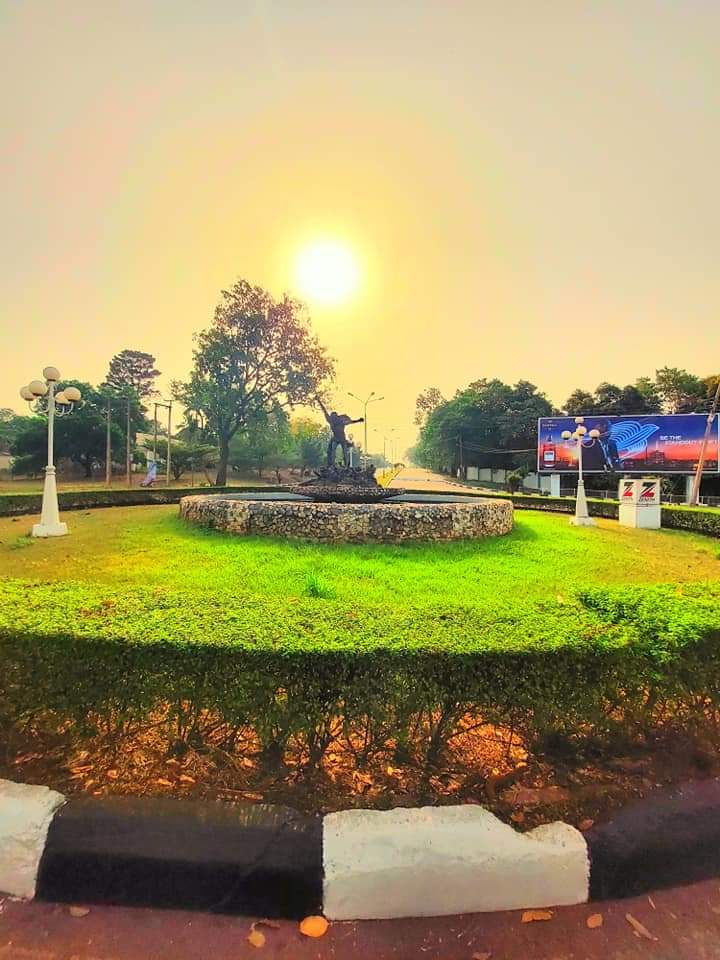 Poet JAMES EZE presents a picturesque view of his secret love affair with Christmastime in Enugu, the Coal City State.

Yet, I don’t know any other Nigerian city with a large park in its center, heaving with green trees, not flower gardens. Or one with long streets lined with trees blooming in the soft rays of the morning sun.

Perhaps, only few things compare to the joy of watching the sun rise slowly over Enugu’s quaint little hills. And if one is patient enough, it is possible to see the outline of the city’s famous hills in the distance, brooding over rows of roofs in a bewitching overcast in harmattan. Of course everybody knows that Enugu and her hills are like the tortoise and her iron coat. You can’t envision one without the other.

When the first wandering Europeans arrived in Enugu in 1903 they were essentially scavenging for minerals. They believed that the crouching hills of Ngwo must be keeping a heavy secret. They found the secret beneath the hills in 1909.

And so began the modern story of Enugu… the aspirational city of the Igbo; the mirror image of Igbo quest in city aesthetics and urban lifestyle.

Christmas is different in Enugu. It creeps slowly into the atmosphere in early December with heightened festivities and a sense of freedom and happiness that is not easy to explain. Suddenly, the social circuits blink awake with colorful weddings, reunions, end-of-year parties, musical concerts, art exhibitions, award ceremonies, comedy shows and a shopping frenzy across the city.

The feeling intensifies when Christmas carols begin to filter out of overhead speakers in malls and car steroes. Excitement hangs in the air. Like the harmattan haze, you can feel it but you can’t touch it. There’s a swirl of anticipation; a sense of expectancy.

Enugu finally shivers in the cold clasp of the Yuletide season, a few days to Christmas. Traffic is heavy on all roads. You could feel the pulse of the city in the drinking gardens, lounges, night clubs and a thousand other watering holes.

At Extreme, a popular hangout in upper class Independence Layout, the mood is infectious. Youngsters down assorted cocktails as they munch on spicey recipes. Cubana stirs awake at midnight with shimering lights beckoning revelers to her warm bosom. Skimpy clad ladies line up the once serene Igbo Eze Street with deceptive smiles that promise cheap thrills behind closed doors. Cars crouch on either side of the roads, stretching as far as the eyes can see. It’s about to go down.

It’s hard to imagine Christmas in Enugu without folks from the diaspora. You can easily detect them from their fake American accents and slightly arrogant air. The joke is often on returnees from China, Malaysia, Pakistan, Vietnam and other little Asian countries who speak in fake American accents.

Returnees from the UK, Germany and Italy usually look too serious for everyone’s comfort. They are known to be tight-fisted and often at odds with themselves, wearing stern looks to put beggarly relatives at bay. Someone said they were usually weighed down by a mountain of unpaid bills and had to hide behind unsmiling faces to dodge financial obligations.

The American and Canadian returnees are not any better although their expansive ways chime in with the mood of the season. Some of them come with light entertainment, regaling their besotted relatives and friends with outlandish tales about life in America. Sometimes they pull off some showboating; dropping a few dollar notes into expectant arms. But even with the soaring exchange rates, the naira value of those notes reduces them to a mere a token. Still, they are the preferred. Everybody loves the dollar.

Enugu shrivels into a shy metropolis on Christmas day. Many residents celebrate Christmas indoors, preferring the warmth of family to the razzmatazz outdoors. The city sheds much of its traffic; revealing elegant roads lined with houses whose roofs are covered in mist at dawn.

Distances shrink into a few kilometers and family visits and reunions can be done with amazing ease. And if one is patient, one could even pullover to admire Enugu’s many impressive sculptures at close quarters.

Halfway into the yuletide season, the city empties its crowd into several villages where wrinkled elders and loving relatives wait with wise words and welcoming smiles.

Harmattan cold is felt more in the villages. And when it becomes very cold, elders warm themselves around log fires in the early morning.

Igbo villages come alive at Christmas. Familes give their children out in marriage under the kind gaze of their ancestors. New houses are opened with fanfare and firece football matches light up playgrounds in the evening.

In recent times, a colourful twist has been added to the Christmas pizzazz in Igboland. Delectable maidens file out for beauty pageants in the evening and in the nubile dance of the pageant, a man might pick his bride.

It is normal to wake up to slices of steamy okpa on an Enugu morning. The soft, yellow recipe has sustained many generations with a taste to die for and instant filling of every space in the stomach. In the evening, abacha, a delicious mix of cassava, ukpaka and vegetables with the allure of a carnival in a plate, comes handy. Folks believe that Abacha travels faster when washed down with cups of juicy palm wine. The conversation between palm wine and Abacha in a roomy stomach has never led to a shouting match, they say.

The city roars back to life on New Year’s eve. But it is a different kind of roar. The contrast is sharp. The ebullience of Christmas has given way to fanatical spirituality and fear.

No one could tell what the New Year would bring. So, it’s best to approach the year through the open doors of religion and surrender all fears and anxities of the New Year to God. And this is why when firecrackers rent the air to welcome the New Year in Dubai, Sydney and Tokyo, shouts of “hallelujah” usually split midnight churches in Enugu and other Nigerian cities to hand the new year over to God.

Enugu. The ageless bride whose spell breaks the resistence of everyone that has found warmth in her soothing embrace!

Enugu Okpa and Abacha are 2 most popular native meals