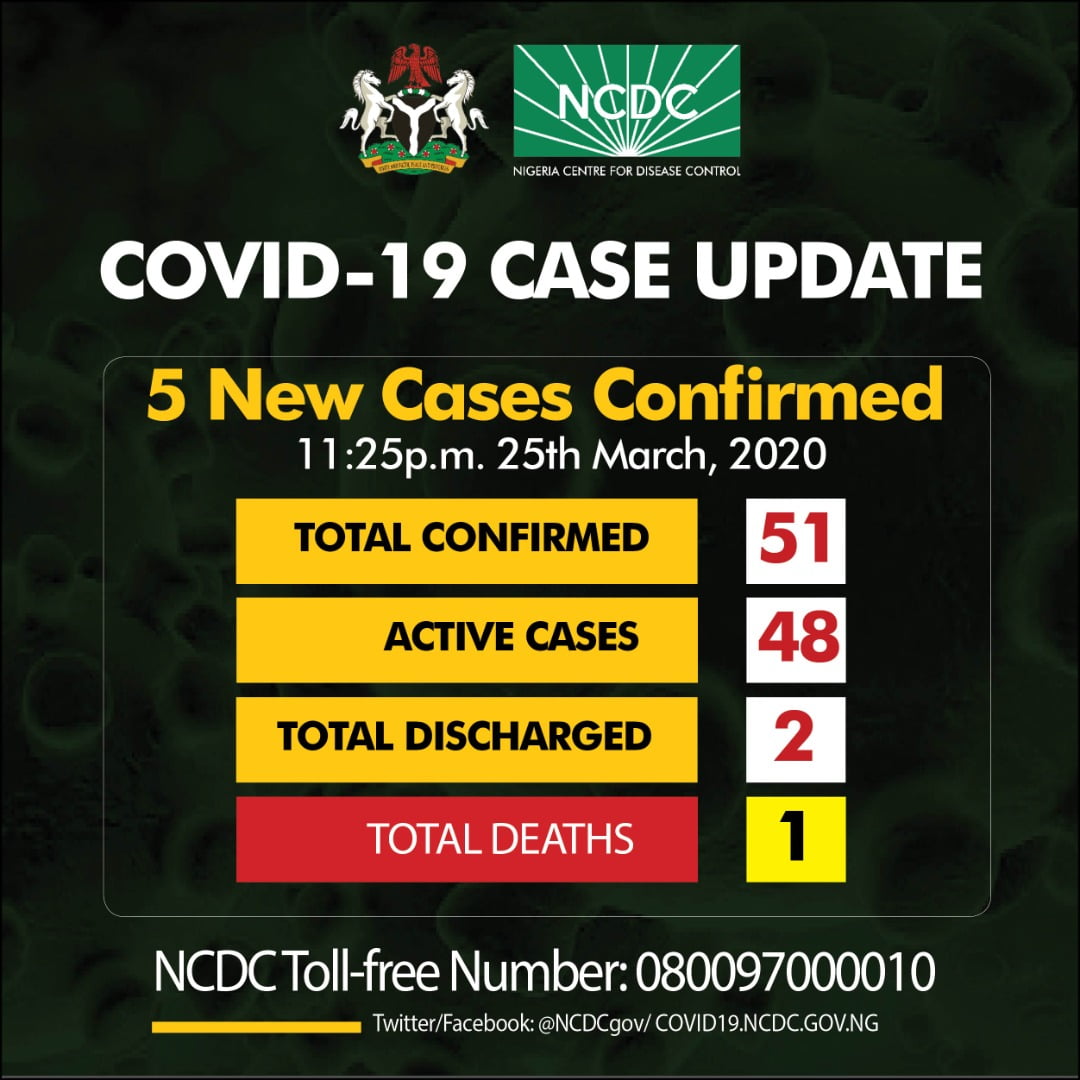 NCDC reports via its Twitter handle that five more cases of Covid-19 virus infections have been confirmed, bringing Nigeria’s total to 51 confirmed cases.

The Agency says that while there are 48 active cases, two persons have so far been discharged and one person succumbed to the virus attack. Lagos leads the pack with 32 cases, FCT with 10, Ogun with 3, while Oyo, Edo, Bauchi, Osun and Rivers have each reported only a case.

NCDC has launched a campaign titled “take responsibility” in which citizens are advised to practice social distancing, wash hands regularly, clean surfaces regularly, cough/sneeze into their elbows or tissues which should be disposed of immediately, and self-isolate for 14 days if they have returned from high risk countries or have been in contact with returnees from those countries.

The campaign aligns with the promotion launched yesterday 24 March by the management of eMetro News.

NCDC WhatsApp Platform is Back Online

NCDC has announced that its messaging platform – the service it hitherto installed to promote 2-way communication with Nigerians on WhatsApp – is again up and running.

Those who connect to the NCDC WhatsApp platform will receive real-time updates on #COVID19NIGERIA, learn how testing is carried out, receive urgent messages for Nigerians from the Agency, and be able to engage directly with the Agency.

Enugu State Government has taken up a group life and group personal accident insurance for health care providers mobilized for the Covid-19 response in the State.

Those covered by the policy include doctors in the State Teaching Hospital where the isolation centre is located, all doctors in the Enugu State Ministry of Health, and all health workers.

Also included are firefighters, staff of the State Emergency Management Agency, and those involved in essential services.

Secretary to the Government, Prof. Simon Ortuanya said government hopes to use the gesture to boost commitment and productivity among the beneficiaries.

Here’s a video shot by the Irish Medical Team battling to contain the upsurge of Covid-19 cases in their country.

Chairperson of the State Vigilante Supervisory Committee, Ikechukwu Aduba, directed AVG Zonal Supervisors in the three senatorial districts to immediately mobilize members of the group to work with Police and other security agencies in the exercise.

Their brief is to prevent from taking place in any part of the state, such public ceremonies as traditional marriages, ofala and masquerade festivals, funeral ceremonies, baby christening, and weddings anniversaries. The coalition will also frustrate efforts by residents to undertake title taking ceremony, street football, football matches, and any gathering of more than thirty persons.

Aduba said that all directives contained in Gov. Willie Obiano’s Monday broadcast will be enforced by the AVG and asked for support from natural rulers and town union presidents on the task ahead.

Former Vice President Atiku, whose son has tested positive to the coronavirus, has pledged to give N50 million to any effort by the Nigerian Government to introduce a stimulus package that will help citizens cope with the fallouts of Covid-19.

In a statement issues last night, he commended those who have provided some form of relief for the people and asked more corporations and individuals to chip in.

“To this end, Priam Group pledges N50 million on my behalf as my humble contribution to a relief Fund that will form part of the stimulus package.”

Governor of the Central Bank of Nigeria (CBN), Mr. Godwin Emefiele said early last week that the bank will dole out N1.1 trillion intervention funds to support critical sectors of the economy.

He said in a statement that the N1.0 trillion of the money would be deployed to support local manufacturing and boost exports while the balance of N100billion would be used to support health experts as they work with global scientists to patent and produce vaccines and test kits, provide laboratories and fund research and innovation.

However, after a meeting of the Bankers’ Committee, the CBN announced that the funds will be raised to N3.5 trillion.

However, following the bankers’ committee meeting on Saturday 21 March, it was announced that the funds would be increased to N3.5 trillion.

Beyond the pledge to support pharmaceutical companies to procure raw materials and equipment to boost local drug production, details of how the funds would be deployed are still being expected. There are speculations that the commercial bank CEOs agreed to lend the balance of N2.4billion to be disbursed as loans to small businesses and the manufacturing sector.