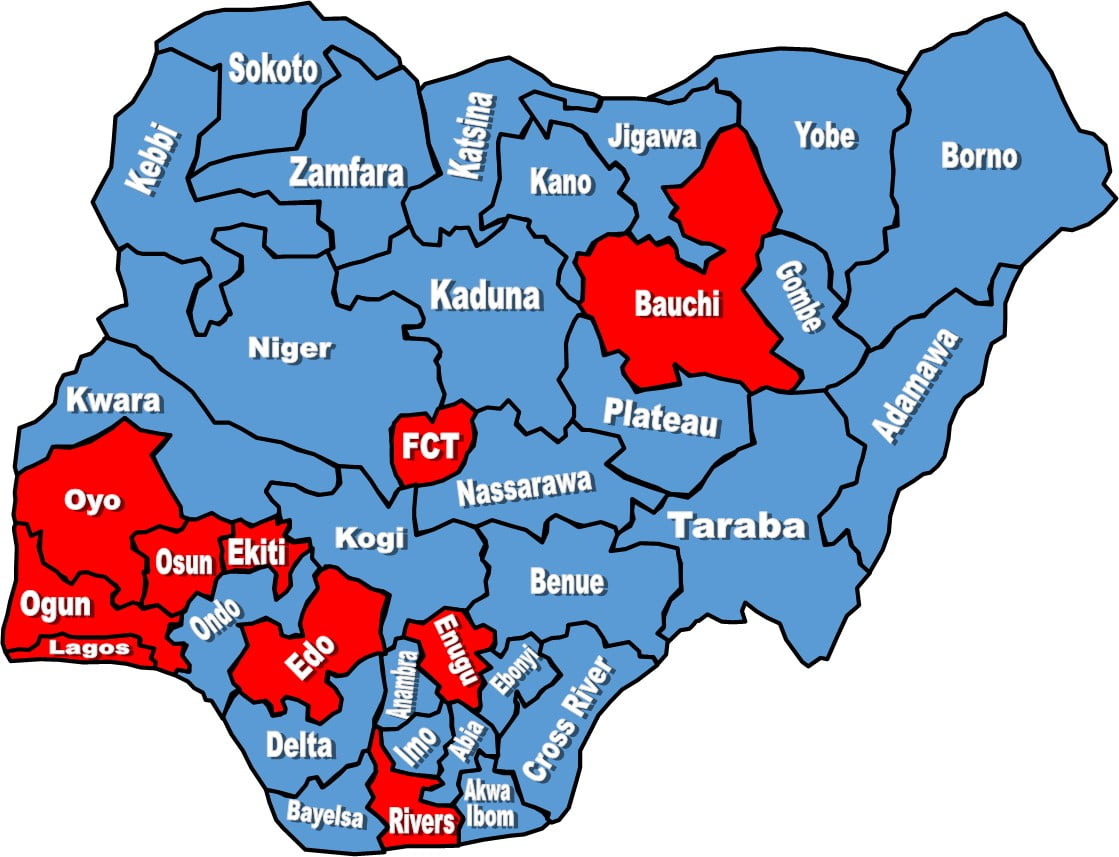 NCDC reported last night that 11 new cases of Coronavirus have been confirmed in Nigeria. Enugu State has become the first from the South East to report entry of the deadly virus, from two cases. Lagos, the epicenter of the virus, reported eight additional cases while Edo State reported an extra case.

As at this morning, there are 81 confirmed cases of Covid-19 reported in Nigeria, while three have been discharged and one died.

NCDC did not indicate whether the new discoveries from Enugu are contacts of other cases or returnees from abroad.

Lagos case continues to confirm the fastest rate of spread of the virus with a combined total of 52 cases, followed by FCT (14), Ogun (3), and Oyo (3). Edo, Bauchi and Enugu reported two cases each while the rest – Ekiti, Osun and Rivers have each reported only a case.

Nigeria is shopping for donations to make up about N120billion it will cost to successfully eliminate Coronavirus from the country, Central Bank of Nigeria (CBN) Governor, Godwin Emefiele, has said.

The funds to be raised will be used to procure equipment, material, and infrastructure needed to fight this pandemic.”

“It is clear that the private sector needs to step in and support efforts already being made,” he said.

He will be relying on members of the Bankers’ Committee and other billionaires in Nigeria to raise the money. Already Africa’s richest man Aliko Dangote and Access Bank have teamed up and are looking for partners to form a coalition of donors, including international oil companies.

Emefiele said he can count on six persons and organisations to donate at least a billion naira each in the first instance.

The Nigeria National Petroleum Corporation (NNPC) yesterday rallied 11 other oil companies to chip in N11Bn in what its chief executive, Mallam Mele Kyari, described as a “collaborative effort to combat the pandemic and its attendant impact.”

He said the funds will be used in three areas – provision of medical consumables, deployment of logistics and patient support, as well as delivery of medical infrastructure.

The Agency did not disclose how they contracted the virus.

NCDC has at yesterday been indicating where and how the cases hitherto reported may have contracted the virus, including recent travels abroad or contact with a confirmed case.

The omission has thrown Enugu residents into anxiety.

Effective Tuesday 31 March, Enugu State land borders will be shut and interstate travels to and from the State banned as the Government braces for management of the Coronavirus which has been confirmed for two cases in the State.

Secretary to the Government, Prof. Simonn Ortuanya, said in a statement that all markets, no matter the size, will close from the same date. Exempted from the closure will be those selling food items, pharmaceuticals, medical equipment and other basic items of daily domestic use who must comply with standard hygiene protocols.

Local Government Council chairpersons were asked to enforce the directives at the local government levels, in addition to the powers already given to security agencies and the State Medical Response Team.

The state appealed to residents for understanding. “At this difficult time, no sacrifice is too big to save the lives of our people,” Prof. Ortuanya said.

The World Health Organization (WHO) announced last night that it had shipped two million items of protective gear to 74 countries that need them the most, while it plans to ship some more to 60 other countries.

WHO director-general, Dr. Tedros Adhanom Ghebreyesus, said that more of the equipment is needed at this time, a message he took to the G20 as well as ministers of Health around the world.

Tedros said the biggest challenge he has come to identify from his interactions is that of shortage of personal protective equipment.

Resident doctors working at the Enugu State University of Technology (ESUT) Teaching Hospital (Parklane) have hurriedly shelved their plan to embark on an indefinite strike, following public disgust at the awkward timing.

Media commentators have taken umbrage that the residents appear not to be in tune with the situation worldwide as nations battle to contain a rampaging Coronavirus that has infected more than half a million people and led to 20,000 deaths.

NCDC also announced today that two cases of the virus have been confirmed in Enugu; these will be automatically removed to the Isolation Centre at the ESUT hospital for management and care.

Anambra State has opened a dedicated account with Fidelity Bank to warehouse donations from individuals and organisations that have expressed interest in contributing to the effort to battle the coronavirus in the event that it comes to the state.

The virus has already been discovered in the sister state of Enugu.

The State Commissioner for Information and Public Enlightenment, Chief C. Don Adinuba, said yesterday that the account is domiciled with Fidelity Bank and that disbursements from it will be directly supervised by Gov. Wille Obiano who is the head of the Anambra Covid-19 Task Force in order “to  ensure absolute transparency and accountability.”

The state will publish every fortnight in the media, names of donors, their donations and how the money they contributed are spent.

Adinuba disclosed that part of the funds would be used to conclude ongoing negotiation with the NCDC to accredit the State University Teaching Hospital as a Testing Centre for Coronavirus, using its “mega laboratory where over 500 tests can be conducted simultaneously.”

“Those who wish to donate materials and equipment like ventilators, surgical face masks, goggles, surgical gloves, stretchers, automated ICU beds, personal protective gear, examination gloves, and infrared thermometers are encouraged to bring them to the office of the Secretary to the Government,” Adinuba said.

In the first phase of the plan, the State government will be targeting 200,000 families that it will supply with a package containing rice, beans, garri, bread, dry pepper, drinking water and vitamins.

Each package will be measured to last a family of 6 for 14 days in the first instance.

“Please stay home with your loved ones; we want the best for you,” he told residents of the state.

Lagos State Ministry of education has teamed up with radio and television broadcasters to deliver tutorial sessions for SS3 students preparing for the 2020 West African School Certificate Examinations (WASCE).

The students will be occupied with preparations while they observe the stay-at-home and social distancing directives from the State Government.

Lagos State Deputy Governor, Dr. Obafemi Hamzat (@drobafemihamzat) tweeted that the goal is to ensure that “our current set of SS3 pupils excel at their federal examinations.

The West African Examinations Council has cancelled the exams that were to begin in April 2020 following the outbreak of Coronavirus around the world and in many West African countries.

Aviation Minister, Senator Hadi Sirika, said yesterday 27 March that no international commercial airlines are being allowed to land or take off in Nigeria since the ban imposed by the Nigerian Civil Aviation Authority (NCAA) took effect on Monday night.

He also clarified exemptions to the ban to include aircraft in a state of emergency, over flights, operations related to humanitarian services, alternate aerodromes identified in the flight plan, technical stops where passengers do not disembark, and cargo flights.

Except for flights in a state of emergency, all other exceptions must be cleared with the Minister who is the sole authority for such approvals.