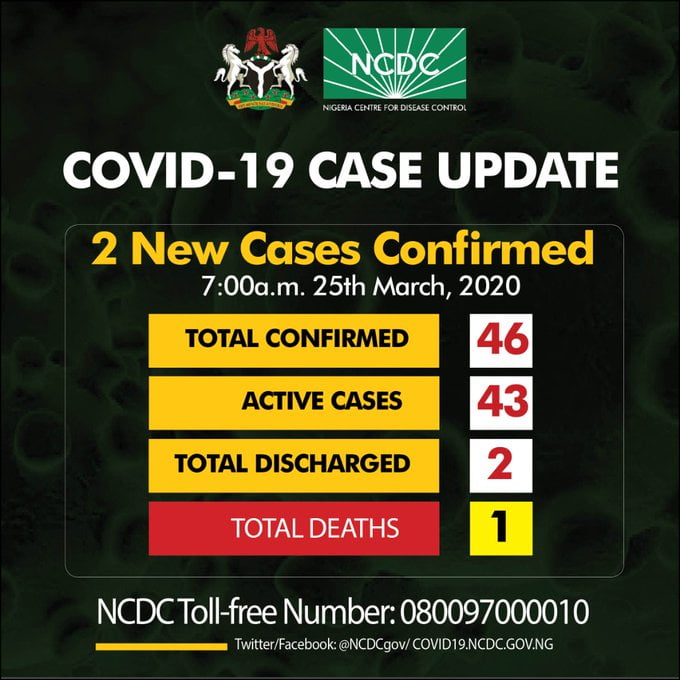 Common symptoms of coronavirus disease are cough, breathing difficulty and fever. This is usually associated with travel history to a country with confirmed cases or contact with a confirmed case. Please protect yourself.

With Osun recording a first case, the number of States in Nigeria with reported cases of Coronavirus is now seven, in addition to the FCT. Both new cases are of Nigerians who returned to the country within the last seven days. Unlike previous cases, NCDC did not disclose the countries where they returned from.

Meanwhile, State Governor, Godwin Obaseki is in self-isolation after learning that the Chief of Staff to the President whom he interacted with also tested positive.

Shuaibu told journalists that Speaker Okiye recently returned from the United Kingdom and went into self-isolation, as advised by health authorities.

“He is in stable condition. His family members have also been tested and the tests came out negative. The only two persons he had direct contact with were his wife and daughter and they have been tested and fortunately, they tested negative.”

WHO laments slow actions by Govts

The World Health Organisation (WHO) director General, Tedros Adhanom Ghebreyesus, says the slow response of governments around the world has impeded efforts to quickly contain the virus when it was first discovered in China.

Tedros said it was crucial that political leaders of the world nations take actions to slow the spread of the pandemic to avoid overwhelming their countries’ health care systems.

“We called this virus ‘Public Enemy No.1’ and asked governments to (quickly) limit its potential spread,” he said at a press briefing today.

“Take aggressive actions now… it’s a dangerous virus. We had been saying to the world the window of opportunity is narrowing and the time to act was actually more than a month ago, two months ago.

“We have overcome many pandemics and crises before. We will overcome this one, too. The question is how large a price we will pay,” he said.

Tedros announced that “more than 16,000 lives” have been lost and how many more we lose will depende on the decisions that governments make.

Preparing the system is very important for any country, he said.

WHO officials suggested that the most urgent tasks for governments now are to (a) test as many people as it can so it can isolate positive cases and prevent further spread, and (b) ramp up production and availability of testing centres and equipment

A statement from Buckingham Palace today said that the heir-apparent to the British throne, Prince Charles, has contracted the Coronavirus.

His medical advisers said he has been exhibiting mild symptoms since the weekend but was otherwise in good health, with the virus not expected to develop in a more serious illness.

The news threw the people of Britain into a panic, with the Prime Minister, Boris Johnson, issuing rapid directives that meant the country was now in a lockdown.

There was anxiety about the health status of both the Queen, Elizabeth II and other members of the Royal Family that Charles was exposed to during the past week.

Buckingham Palace officials however said the Queen is “in good health.”

(9:08 AM; 24 March 2020) Lagos State Ministry of Health, @LSMOH, has announced that those who participated in the 14 March African Magic Viewers’ Choice Awards (AMVCA) which held at @EkoHotels may have come in contact with one of the confirmed cases in Lagos.

Bauchi Governor was in Germany

It has been established that, contrary to the grapevine news that Gov. Bala Mohammed of Bauchi State may have contracted Covid-19 virus from his meeting with the son of former Vice President Atiku Abubakar, the Governor may have independently contracted the virus overseas.

This much became evident from the tweet by the NCDC yesterday which stated that the two cases confirmed for Bauchi and the FCT were people who returned from trips to Germany and the Uk respectively.