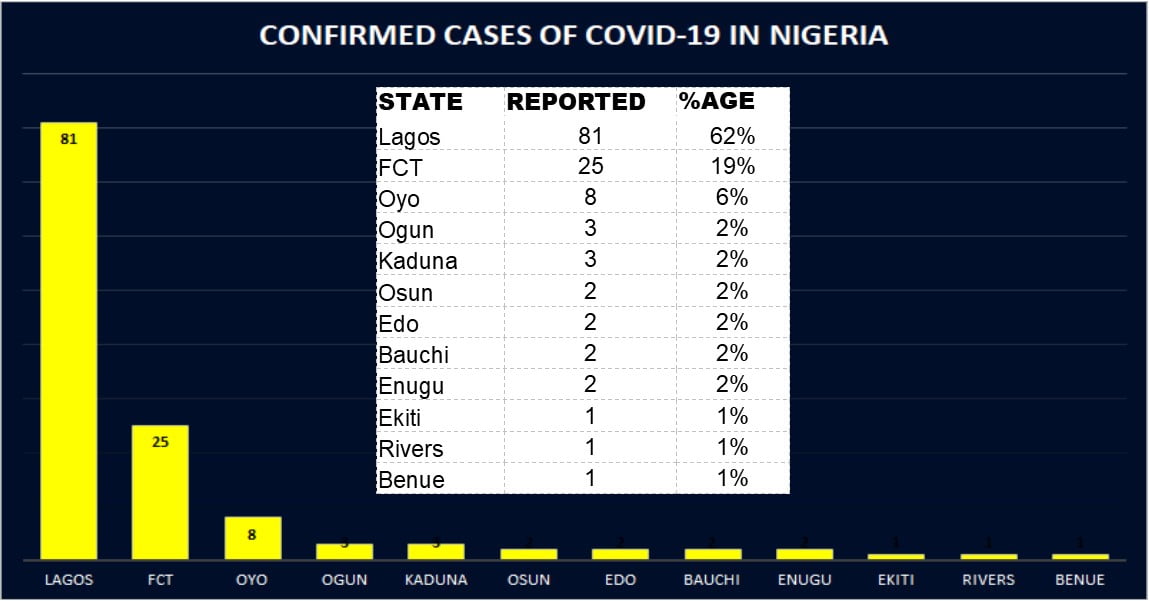 Welcome to today’s updates. Continue to come back here if you can, as we intend to do an hourly updates as the news unfolds. eMetro will give you the news without drama, and the encouragement to handle the onslaught of Covid-19 with the cool head you need to protect yourself and your loved ones. This is our promise.

Last night, Nigeria reached and surpassed the 100-case mark, indicating very serious implications ahead for a surge that is expected. Health experts continue to do what they can, aided by an outpouring of support by individuals and organisations who are donating time, resources, and funds to the NCDC, the lead agency and to Lagos State, the epicentre of the virus spread.

OYO: A STATE TO WATCH

Oyo State currently accounts for 6% of the reported cases in Nigeria, twice the number from Ogun State. President Buhari did not mention this State in last night’s broadcast. Are we waiting until she reaches 10% of the national total before we talk about what to do there and go ahead to support the state to do it?

Lagos speaks to Igbos on Covid-19

The numbers from the Nigeria Centre for Disease Control (NCDC) show a sharp rise in confirmed cases of Covid-19, from below a hundred yesterday to 131 today. The death toll has also risen by 1. NCDC did not disclose the location of the latest death. Lagos continues to maintain the lead with 62% of the cases, followed by Abuja (19%) and Oyo (6%). Benue State is the latest addition to the states confirmed to have been touched by the virus.

Governor Seyi Makinde of Oyo State has confirmed that he tested positive for Coronavirus.

The Governor issued the following cryptic message to announce the result himself:

“I just received my COVID-19 confirmation test result. It is POSITIVE. I am asymptomatic and will continue to self-isolate.”

He asked the people of Oyo to stay home and stay safe while complying with all the directives from the Task Force.

The Task Force had imposed a dusk to dawn curfew that would last from 7.00 pm to 6.00 .am to take effect from yesterday, 30 March in the State. Inter-state transportation into and out of Oyo State was also suspended from Sunday 29 March. Exempted are vehicles carrying food items, medical, pharmaceutical and petroleum products.

He is the third Governor in Nigeria to be afflicted by the virus, which has now touched 131 persons, with two deaths. Makinde’s colleagues who earlier announced their test results include Bala Muhammed of Bauchi and Nasiru el Rufa’i of Kaduna States.

President Muhammadu Buhari announced five major initiatives in the speech broadcast to the nation last night, 29 March 2020, in a renewed effort to battle the Coronavirus pandemic which he said has created both a “health emergency and an economic crisis” for Nigeria.

These initiatives are embodied in a two-pronged tactic which the federal government will execute, namely, to protect lives of citizens, and to assisting workers and business owners to pull through the period “in dignity and with hope and peace of mind.”

Since scientists are yet to develop a cure for the Covid-19 virus, the President strongly advised that citizens must avoid getting infected by adhering to “regular hygienic and sanitary practices as well as social distancing.”

The major new initiatives announced in the speech include:

In his broadcast to the nation last night, President Muhammadu Buhari enjoined Nigerians to be their brothers’ keeper through supporting the poor in their communities “by helping them with whatever they may need.”

His government however announced six measures designed to assist citizens who are beneficiaries of federal social programmes as well as businesses that borrowed from national and international agencies:

Group Managing Director of the Nigerian National Petroleum Corporation (NNPC), Mallam Mele Kyari, yesterday handed over medical equipment to the University of Abuja Teaching Hospitals in Gwagwalada in the FCT.

The NNPC CEO, Mallam Kyari, announced at the handing over event that operators in the Oil and Gas Industry have been mobilized to assist government in dealing with the coronavirus pandemic.

The effort, he said, is coordinated by Minister of State for Petroleum Resources, Chief Timipre Sylva, and the goal is to support with urgently needed human and materials resources, the work of a multi-sectoral team led by the Nigeria Centre for Disease Control (NCDC) to halt the spread of the virus in Nigeria.

Mallam Kyari commended the dedication in saving lives as reflected in the efforts of the Health Minister and his Ministry, the NCDC, the Public Health Department (PHD) of FCT, University of Abuja Teaching Hospital and the entire medical community in Nigeria.

“It is obvious that to fight this menace, we all have to collaborate to ensure that Nigeria defeats this virus,” Mallam Kyari appealed. In attendance at the event were the Medical Director of NNPC Medical Services Limited, Dr. Mohammed Zango, Chief Medical Director of the University of Abuja Teaching Hospital, Professor Bissallah Ekele, and Director of Administration of the NCDC, Alh. Yahaya Abdullahi who received the donation on behalf of the NCDC.

I don’t have the virus, says Foreign Minister Onyeama

Foreign Affairs Minister, Geoffrey Onyeama, yesterday hotly denied that he tested positive to the Coronavirus and is quarantined in Enugu.

The rumour mill in the Coal City has been alive with the claim that the Minister and his personal assistant were the two cases reported by the State.

A statement from the Minister’s assistant on Media, Ms. Sarah Sanda, described the rumour as “fabricated and malicious.”

Ms. Sanda said that the Minister is a member of the Presidential Task Force on Covid-19, all of who were recently tested and found to be negative.

“The authors of this act are well known, as is their motive; to embarrass and spread alarm and panic during a national emergency,” she wrote.

She said that her boss has complained to law enforcement agencies who will investigate and mete out “severe sanctions as a deterrence for the future.”

The decision is a directive from the Federal Government to prepare and handover the 37 National Youth Service Corps (NYSC) orientation camps across the country for the purpose.

Enugu’s permanent orientation camp is in Awgu Town, the headquarters of the Local Government with the same name.

Gen. Ibrahim commended efforts and sacrifices of Corps doctors, pharmacists, nurses and other paramedics who have been deployed to assist the national effort to contain the spread of the virus.

He advised corps members who are currently serving in various states to remain calm and strictly observe regulations dished out by federal and state authorities where they are serving.

He specifically asked them to observe good sanitary habits, use hand sanitizers, and avoid “undue and indiscriminate socialization with friends, acquaintances and mingling withy the crowd all of which place one at the grave risk of infection by the airborne and highly contagious virus.”

NCDC has announced its appreciation to the Aliko Dangote Foundation (@AlikoDangoteFdn) for the donation of four ambulance vehicles to support Covid-19 response in Lagos, led by the State’s Health Ministry (@LSMOH).

Nigerian billionaires have been living up to their reputation by chipping in billion naira and above donations to the federal effort to curb the spread of coronavirus. Among those whose billion-naira donations have been announced are bank chairmen and chief executives Tony Elumelu (United Bank for Africa), Jim Ovia (Zenith Bank), Herbert Wigwe (Access Bank), and Femi Agbaje (Guaranty Trust Bank), industrialists Aliko Dangote (Dangote Group) and Abdulsamad Rabiu (BUA Group), and oil magnate Femi Otedola.

Herbs are no cure for Covid-19

Nigerian Health Watch (@NigHealthWatch) has tweeted that “there is no scientific evidence that cooking neem leaf, pawpaw leaf, ginger, garlic, lime and orange is an effective treatment for coronavirus.” The Group asked Nigerians not to share such messages, an advice that was endorsed by the NCDC which wasted no time to retweet the message.

The carrier, Airpeace, has made a historic trip to Tel Aviv, to discharge 274 Israelis evacuated from Nigeria

The airline picked up 65 passengers from Lagos and 209 from Abuja, from where it made the first direct flight between Nigeria and the State of Israel since the two countries established diplomatic relations 60 years ago.

Airline proprietor, Chief Allen Onyema thanked the Minister of Aviation, Sen. Hadi Sirika, for prompt approval of the request to fly the passengers.

Israeli Ambassador, Shimon Ben-Shoshan, was happy that his people were safely taken home