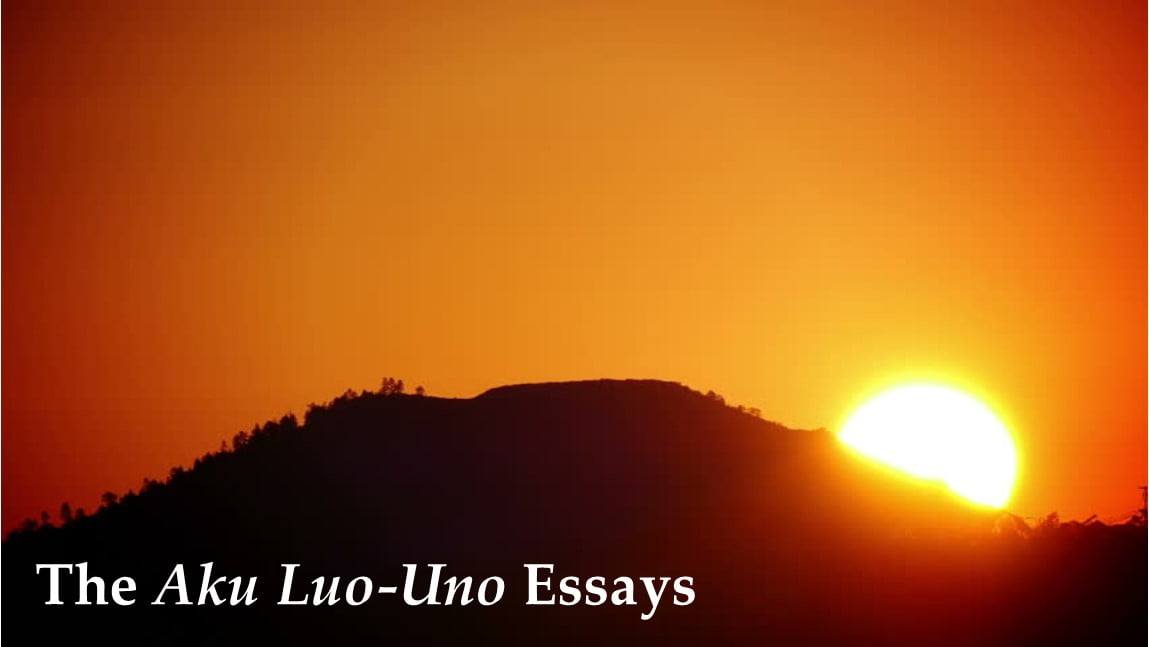 Dr. Okey Ikechukwu profiles age-old developments at Amokwe Udi Community in Enugu State as a lodestar for revival of a disappearing “sense of community” in Igboland, and which gives the aku luo uno concept its true meaning.

The year is ending on a rather plaintive and cheerless note for many individuals, villages, towns, local governments and states. The very nation itself is on all fours, whining piteously. But matters a little more cheerful and upward looking for the people of Amokwe, in Enugu State.

They have laboured for decades to create a real home for themselves and sustain a sense of community that still retains the essence of Christmas, amidst all the celebrations. The old and the new are at peace here, and without much noise, fanfare of crude displays. There a civilised ambience to it all. The confusion in our national Affairs, as well as the mess in nearly all the states of the federation, stand in bold and embarrassing contrast to the results of what is now stylishly called Amonationalism. If only the great Prof. Odenigwe was still here to see it all in flesh and blood!

This year marks the 70th anniversary of an Oscar winning documentary film “Daybreak in Udi”, which was inspired by the people’s community spirit and financed by HRH’s government in 1959. It also received a BAFTA Award for Best Documentary Film at the time. The documentary told the story of a people who were focused on modern ideas of development, self-help, community cohesion and an uncommon dedication to progressive social interventions. Since then, when Amokwe first attracted the attention of the “international” community, it has retained and expanded the virtues that drew such attention to this Eastern Nigeria community, nearly a century ago. Although most of the original, Oscar winning film was later edited into a 1953 two-segment documentary called “Savage World” by the same crew of film-makers, the story of “an African tribe” that worked together to build a maternity hospital and invest in “modern” ideas and ways, and against the opposition of some community members still resounds untrammeled. But back to the travails of travelling for Christmas, before going back to Amokwe.

Many Nigerians travelled “home” for Christmas, especially our brothers and sisters from the South-east; for whom this is an annual ritual. The only difference this time is the conspicuous decline in the number of those who travelled. The few who, against all odds, still travelled for Christmas had bad roads, bandits, kidnappers, the police, NDLEA, customs and sundry checkpoints to contend with all the way. Final safe arrival at their respective destinations also did not hold much good cheer for many. The predominant narrative is that the first few minutes of reunion with relatives were barely over before they were set upon by hungry relatives. This was in the midst of cleaning up, looking for fuel for the generator, reactivation of boreholes and even resumption of adjourned filial disputations over land.

There is something everyone is seeing, but which no one seem ready to admit. That is the disappearance of a sense of “community” in most of our hitherto closely-knit communities. Brothers, sisters, cousins and members of the extended families are now accomplices in many cases of kidnapping, armed robbery and petty thievery. Without security, means of livelihood, social amenities like pipe borne water and electricity, the sense of alienation grows among the people. Meanwhile the seasonally migrating elite keep trying to convince themselves that they are having a good time in their respective villages; even as they are cursing under their breath. Months of preparation, tortuous travels and huge expenses, in the course of which many even miss the true meaning and purpose of Christmas!

Since most private business posted massive loses, and private business is the mainstay of Ndigbo, it is not surprising that not so many of them travelled home for Christmas this time around. The only kidnapping and armed robbery industry are the only businesses booming and blossoming today. Amidst all this, we end up forgetting that that Christmas is the commemoration of the birth of the Saviour, the Special Envoy from God Almighty, Who came to this world to urge us to live according to the Will of God; so that we may find our way back to heaven. We may even be swindled into not remembering that Christmas, in the strict and proper sense of it, should be a time when every true believer would reflect on his life, reflect on the teachings of Christ, ask himself whether he is living according to what He taught and rededicate himself to the true Christ-Principle. Instead we now spend it in serious socializing, picnics and encounters with Father Christmas. Will the buying up of Christmas trees and lights lead Christ, in Whose name this is supposed to be happening? But, back to Amokwe.

The difference between the Amokwe of the past and that of today is that they now call their decades-old, consolidated community spirit Amonationalism; a word coined by Prof. O. C. Iloeje. To the extent that this new, and even cool-sounding, epithet refers to the drive of this Enugu State community that is largely responsible for its own roads, medial facilities, water bore holes and reticulated water supply all round, it is still in tune with the originating attitude.

It is a verifiable example of a sustainable community development model that puts local and state governments all over Nigeria to shame. For the record, Amonationalism also makes nonsense of the claim in several quarters that Nigerian villages, towns, communities, village heads, traditional rulers and town union presidents are all incapable of doing anything without government finance and backing. Let those who are serious, who have any self-respect and who value their own dignity, go to Amokwe and see things for themselves.

Their roads are graded and touched up once every year by community effort. The repeatedly upgraded medical facilities is the result of their own efforts. Their medical facilities not only offer free medical services, sponsored and supported by the people, but also has free medication for old people. Yes, patients are diagnosed, treated and given the prescribed drugs free of charge. This new initiative is not the handiwork of any individual, or group of individuals, with an eye on contesting for an elective office now or later.

Instead it is jointly funded by Amokwe sons and daughters, through regular annual contributions; especially by those who can afford to do more than others in whatever capacity they find themselves. It is being held together using all the right types of administrative machinery. This is an efficient, self-accounting enterprise by sons and daughters. Those with a medical background, or who are substantive medical practitioners elsewhere in the world, are behind the free drugs initiative.

It is good that this is happening in this same clime of ours, where roguery and debauchery are on the ascendant. The descendants of a people that attracted international attention because of their progressivism nearly a hundred years ago are still setting the pace. This is going on in a nation where everyone is known to have abandoned all virtues taught and projected by our forefathers at the levels of politics, religion, traditional leadership, public service, morality and responsible community life?

In fact, should we not marvel that Amokwe is part of a South Eastern Nigeria where nearly everyone is king in his own compound and over his family and personal staff? To see this sort of thing in a place where hollow, pointless and absolutely ridiculous self-affirmation is the norm, as well as the bane of group cohesion and progressive ideas?

Unlike what obtains in many villages, towns, local governments and states of the South East, places where competition and fat egos drown out the desire for public good, Amonationalism has created a template that is worthy of emulation.

The Dallas chapter of Amokwe Progressive National Organization (APNO and US chapter), Amokwe Development Foundation (ADF) are working together and complementing each other. In doing this, they are not just organising empty public ceremonies and releasing communiques on community development, no! They are now towing the path of folly, like the World Igbo congress that is convened annually in the US, as a “speaking opportunity platform” for Igbo leaders who are yet to distinguish between public ceremonies and substantive interventions with measurable impact. The motivators and sustainers of the Amokwe spirit recently had a very successful APNO-US/ADF convention Dallas, with results that people at home are seeing almost immediately.

Amonatiolism is re-inventing the old Igbo, and indeed Nigerian, spirit that made a community into one people.

All the projects conceived, or executed, here are designed and driven on the principle that the common good is the greatest guarantee of lasting happiness and sustainable well-being. There are no predators, scavengers and scammers here. None who tries can get a foothold, either. The old virtues of basic honesty, general goodwill, and a sense of justice and inner decency still operates here. It should be able to still carry the people much further, if it has brought them this far; notwithstanding the fact that we are in a land with vanishing, or at least speedily decaying, values. And they are not taking anything for granted, either. Eternal vigilance helps to minimize deviance and mischief.

If you take away the occasional, and barely meaningful, government interventions in the area you will see that the Amokwe Progressive Union (APU) of the 50s and 70s left a mark that in now impossible to erase. This community is what it is today because the efforts of concerned individuals who were either lucky to be strategically placed in government, or had valuable connections in government circles and therefore were able to attract development projects to the town, were replicated and translated into a group philosophy.

The “think home” mindset of their people of means has been driving multidimensional development in the town. Come and see the spirit of brotherhood, of community, of love and goodwill for the town and her people, as well as a disposition to channel and administer the fruits from the love and goodwill with utmost honesty, wisdom and efficiency.