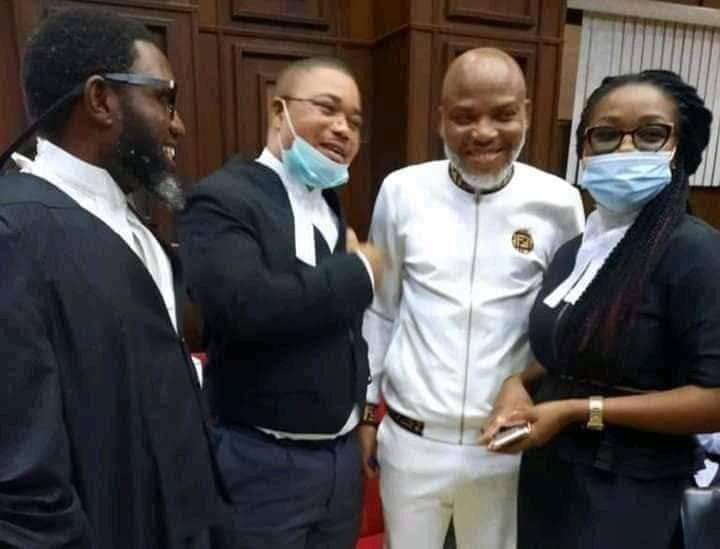 Mazi Nnamdi Kanu’s defense team sharpens strategy to free their client from charges of terrorism and treason brought by Nigeria.

Kanu is the leader of the proscribed separatist group known as the indigenous Peoples of Biafra (IPOB). The group claims that Igbos are marginalised in Nigeria and therefore should exit to become an independent republic and government.

Government announced on 29 June that Kanu was rearrested and will continue with his trial in Nigeria.

The separatist leader was subsequently slapped with a 7-count charge of treason and terrorism. The amended offenses were read out in court yesterday.

Kanu however denies all of the charges.

The defense so far focuses on dismissing the charges through technicalities surrounding Kanu’s arrest and the trial itself.

The team will argue that Kanu be freed because of alleged illegal arrest or on the question of court jurisdiction.

In the first, the legal team has prepared a defence based on what they describe as Kanu’s “extraordinary rendition.” The legal term describes abduction of a person from a country and their deportation without due process. This practice is outlawed under international laws and conventions.

In interviews, defense lawyers said they want to know where and how Kanu was arrested and brought to Nigeria.

Federal Attorney-General, Abubakar Malami said on 29 July that Kanu was “intercepted” and brought back to Nigeria to continue with his trial.

He however could not provide further details as to where and how the interception was made.

The defense team makes a meal of this point, as it allows them to challenge the legality of his arrest by Nigeria.

Whatever you are looking for in the Coal City, Enugu Metro City Directory is the first place to find it. We have over 2,000 businesses and organizations listed already and the list continues to grow every day.

Unable to find what you’re looking for? Give us a call and we just might be able to help you out!

Consequently, the team prefers to label Kanu’s arrest and deportation as illegal and a violation of international laws.

Ejimakor had in fact argued that his client is “technically still in Kenya.

To establish the allegation as a fact, the lawyers have separately sued the Kenyan Government at a Nairobi Court.

The Nairobi suit will hopefully establish facts in the allegation that the Government of Nigeria illegally seized Nnamdi Kanu from Kenya.

In Nigerian however, the trial judge, Justice Binta Nyako, has not given opportunity for this arguement in her court.

Kanu’s defense has consequently focused on using another technicality to get Justice Nyako to dismiss the 7-count charge.

Kanu’s attorney, Aloy Ejimakor, said the charges are weak because prosecutors haven’t linked Kanu to any of the alleged offenses.

In addition, the legal team argues that it is wrong to try Kanu in Nigeria since the alleged offence was committed in the UK.

Yesterday Ohanaeze Ndigbo added another dimension by describing what happened in court as amounting to “a secret trial.”

The allegation arose out of officious security measures that barred various stakeholders from accessing the courtroom to witness the trial.

Journalists, lawyers, activists, a serving Senator and a former Governor were among those prevented from gaining access to the courtroom.

Uwazuruike came to court with ex-Governor Chukwuemeka Ezeife to witness the trial on Ohanaeze’s behalf but were denied entry.

No date is fixed for hearing the Nairobi case while legal fireworks will be staged in Abuja on 10 November.