Enugu in the hands of hypocrites 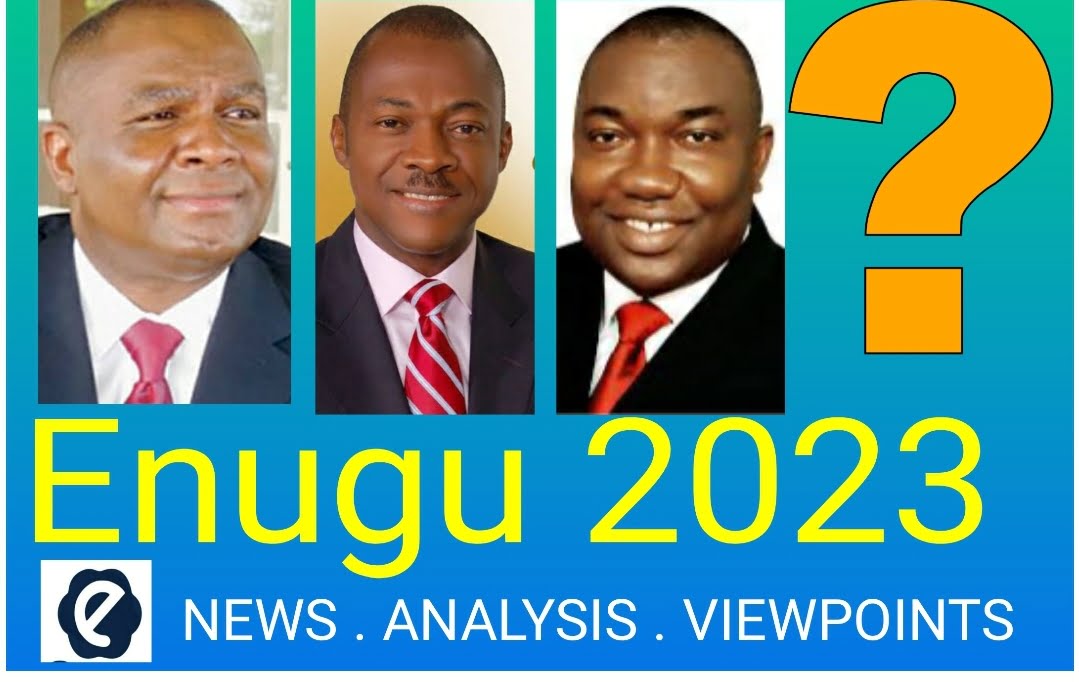 As the 2023 race to Enugu State’s Government House gets hotter, Arthur Okolie explores how Enugu is now in the hands of hypocrites.

With the 2023 election by the corner, Enugu is about the only state that is not discussing its real problems and what each governorship aspirant is bringing to the table to make a difference. So far, no Governorship aspirant, except Chief Ike Ekweremadu, has tendered his agenda/manifesto on how to solve the multifarious problems like heightening insecurity, unemployment, epileptic power, dysfunctional educational system, broken city road network, among others, to guide party delegates to voter right.

Nobody is talking about Governor Ifeanyi Ugwuanyi’s scorecard, which should be the topical issue. Nobody talks about the mountains of refuse defacing Old Park, Okpara Avenue, New Market, Corner Stone, Nkpokiti Junction, Abakpa Nike Bridge, New Artisan, NNPC Mega Station road, Holy Ghost, Ugwuaji, Fire Service, Agbani Road, Uwani, etc. same goes for the biting water scarcity, which has made life unbearable for Ndi Enugu or is it the multiple taxation which grounded businesses. The hypocrites are doing all they can to distract Enugu with their zoning shenanigans.

When politicians come up with such mantra, they always have their target. For instance, when ex-governor, Sullivan Chime, announced that he had zoned 2015 governorship seat to Enugu North (Nsukka zone), it was Chief Anayo Onwuegbu, who provided an insight to guide the simple minded.

Although Ekweremadu had announced in June 2013 that he had no 2015 governorship ambition and thought it should go to Nsukka on the ground of equity, Chime wanted to make assurance double sure.

Onwuegbu, in an interview he granted Vanguard newspaper on 5th November 2014, detailed the context of all Governorship contests from the old Anambra State up to Enugu State and submitted unequivocally that “We have not had zoning in Enugu State; there had never been any zoning”.

“The concept is hinged on the fact that some time ago, it was strongly rumoured that the deputy senate president, Ike Ekweremadu was interested in becoming the Governor of the state (in 2015) and his no-love-lost relationship with the sitting Governor (Chime) is a well-known fact. To put a stop to that ambition, the Governor started announcing that he had zoned the ticket of the party to Nsukka zone. It is a deliberate effort to steer up a sectional consciousness to be used against an envisaged enemy. Let him (Chime) tell us any gathering in Enugu State that says we are going to start zoning. He was not a beneficiary of any zoning arrangement either; he was handpicked by former Governor Chimaroke”, he stated.

Collaborating Onwuegbu’s submission in Sun Newspaper interview on 23rd November 2018, Chime decalred: “In 2013, when we were holding a town hall meeting in Nike Lake Hotel, one journalist asked that since I was leaving office, which zone will succeed me as Governor. When Chimaroke Nnamani became governor, it wasn’t zoned to Nkanu; he won against somebody from the West, even in his re-election bid. When I contested, it was free for everybody, people from the North, from the East, from the West, the same thing during my re-election. Then I said fate had made it that the East had done their two terms, myself in second term at the time, I said it will only be fair that we take it to the North to reduce tensions and I promised to work towards it. That was how it happened. We zoned it to the North, not that there was any agreement; it was common sense to reduce problems”.

One could feel Chime because even when Dr. Nnamani anointed him as his successor in 2007, Nnamani’s deputy, Dr. Okechukwu Itanyi (Enugu North), contested the Peoples Democratic Party, PDP, Governorship primary against him and only lost narrowly.

It is an open secret that Governor Ifeanyi Ugwuanyi has Hon. Chijioke Edeoga, who recently resigned his position as Commissioner for Environment and pick PDP governorship nomination forms, as his first choice of successor. Ekweremadu announced during his 59th birthday in May 2019 that he wouldn’t return to the Senate in 2023. It is believed that Ekweremadu, who played a major role in Ugwuanyi’s emergence in 2015, might expect him to return the favour in 2023. So, rather than come clean on his preferred successor like his predecessors, Ugwuanyi began early to plot the picture of a man whose hands were tied – by zoning. So, all the sponsored rallies and publications to drum up support for an inexistent zoning arrangement that favours Enugu East zone are believed to be geared towards whipping up anti-Ekweremadu sentiments in Enugu East, particularly among Nkanu people, to discourage the senator and also pave way for Ugwuanyi’s choice.

However, whatever was hidden was made open by Senator Chuka Utazi and Dr Okwy Nwodo during the February 2022 Local Government election campaign in Igbo-Etiti. Nwodo and Utazi made it clear to Enugu people that 2023 to 2031 belonged to old Nsukka zone (which includes Isi-Uzo) because the old Enugu zone (Enugu East and West zones) had done 16 years. Nwodo was even specific on Isi-Uzo.

Unfortunately, nobody is telling Enugu masses the underlying truths. Nobody tells them that Ugwuanyi’s and Edeoga’s mothers are of the same mother, but married in Orba, Udenu LGA and Eha-Amufu in Isi-Uzo LGA, respectively. Isi-Uzo was part of old Nsukka zone, but currently and politically part of Enugu East zone.

Chimaroke Nnamani, on his part, wants to install his former Chief of Staff, Peter Mbah, from Nkanu clan.

Again and ironically, most of the promoters of zoning are still hustling to head back to the State or National Assembly, sometimes against graphically agreed zoning formula in their constituencies.

The chief convener of Ife-Emelumma zoning rally and chief marketer of what many, including the Ikeoha Campaign Organisation, described as forged zoning document, Senator Ben-Collins Ndu, has bought forms to return to the Senate.

Chimaroke Nnamani, who ruled Enugu State for eight years (1999- 2007) and spent four years in the Senate (2007 – 2011) before he was consigned to political Siberia by his anointed godson, Chime, is doing his second term as a Senator courtesy of Ugwuanyi. That gesture was interpreted as one of Ugwuanyi’s strategies to eventually checkmate Ekweremadu ahead of 2023. Therefore, by Nnamani’s vociferousness on zoning and prerogative of Ugwuanyi to appoint his successor, he is seen as not just playing to the gallery, but also to the terms of his political rehabilitation in 2019 and survival beyond 2023.

Politics is indeed a serious business. Otherwise, you would expect a champion of Nkanu Governorship interest to wait or insist on Ugwuanyi naming an Nkanu successor before rushing to purchase PDP senatorial forms. And nobody hears him again ever since. By picking the forms, has Chimaroke not betrayed Nkanu and cleared the road for Ugwuanyi to pick his successor from Isi-Uzo? Even a political novice knows that Nkanu cannot have governorship and senatorial seats at Isi-Uzo’s expense at this time and under Ugwuanyi.

Ugwuanyi did 12 straight years as a Member of the House of Representatives. He is completing eight years as Governor. Yet he has picked forms to go to the Senate at the expense of Igboeze South LGA. It is common knowledge that Enugu North’s Senatorial seat rotates among the three Federal Constituencies. Nsukka/Igbo Eze South Federal Constituency took the first slot through the late Senator Fidelis Okoro from Nsukka LGA. Senator Ayogu Eze took the turn of Igboeze North/Udenu. Senator Chuka Utazi took the turn of Igbo-Etiti/Uzo-Uwani. So, if you follow the argument of Ugwuanyi and his zoning choristers, it should ordinarily restart from Nsukka/Igboeze South where leaving Igboeze South is the LGA to produce the next Senator since Okoro had taken the slot of Nsukka.

But the same Ugwuanyi and his team, who insist that Enugu’s Governorship should restart from Enugu East where it began in 1999 hypocritically, argue that rotation of Enugu North Senatorial seat could restart anywhere since it has gone round. As this piece is written, Hon. Pat Asadu, who is about the strongest contender against Ugwuanyi from Igboeze South, has been asked to return to the House of Representatives for a 6th term in exchange for the Senatorial seat due to Igboeze South.

Currently, most State House of Assembly Members are being returned in exchange for their support for Ugwuanyi’s hard-to-sell governorship zoning formula. The Speaker, Hon. Edward Ubosi (Ozege), has bought forms to return to the Assembly for the 4th term. His uncle, Cornelius Nnaji has equally bought form to return to the House of Representatives. Hon. Chima Obieze is seeking a third consecutive term in State Assembly against Ezeagu’s long established zoning tradition.

So, who is fooling who when some people even want to achieve in Enugu what Senator Rochas Okorocha couldn’t achieve in Imo. Yet they claim that Enugu is in the hands of God. Is it godfather, godson, god the cousin or god the son-in-law?

Enugu in the hands of hypocrites