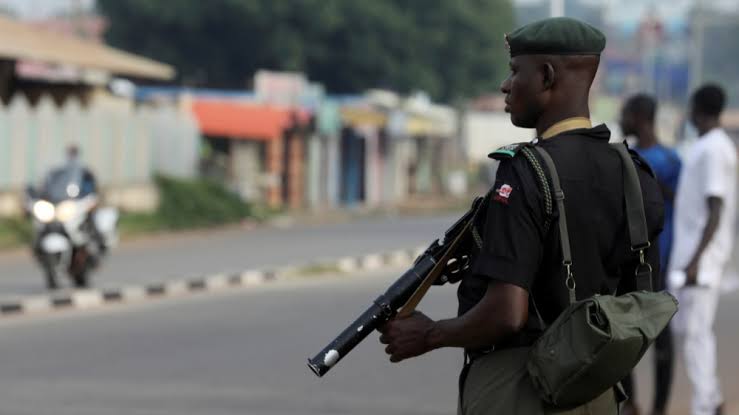 Enugu killer policeman who reportedly shot five persons dead and wounded four is dismissed and will be charged to court.

Enugu Police Command announced the dismissal and planned prosecution of policeman at the weekend.

The unfortunate multiple shootings occured at the Golf Estate roundabout, Enugu on 20 June this year.

The recommendation however arose from disciplinary trial and investigation of the Enugu multiple shootings, Ndukwe said.

He identified the policeman as Inspector Edem Ebong then serving in the Special Protection Unit (SPU), Base 9 Umuahia.

He however did not name the victims.

Witnesses told Enugu Metro that the trigger-happy cop killed five pedestrians and wounded four others at the Golf Estate, Enugu.

He positioned himself at the Golf Estate roundabout and began picking off passersby with his gun, eyewitnesses recounted.

Bystanders initially thought he was playing with his gun until five persons fell lifeless and four others began howling with pain.

Ebong was consequently overpowered and taken into custody by officers of the Enugu State Police Command.

He listed the offences as “breach codes of conduct, rules of engagement and standard operating procedures.”

The unprovoked shooting attracted the attention of the Nigerian Senate which passed a resolution to condemn the incident.

Senators expressed worry about “rising reports of misuse of legitimate weapons by security agents and extra-judicial killings in the Southeast.”

The resolution noted “the wider implications of such incidents to the peace and security” of the region and the nation.

Consequently, Senate directed Police and Service Chiefs and heads of other armed security agencies to regularly assess “the state of mind of their personnel.”

They are also to retrain their men on relations with the civilian populations.