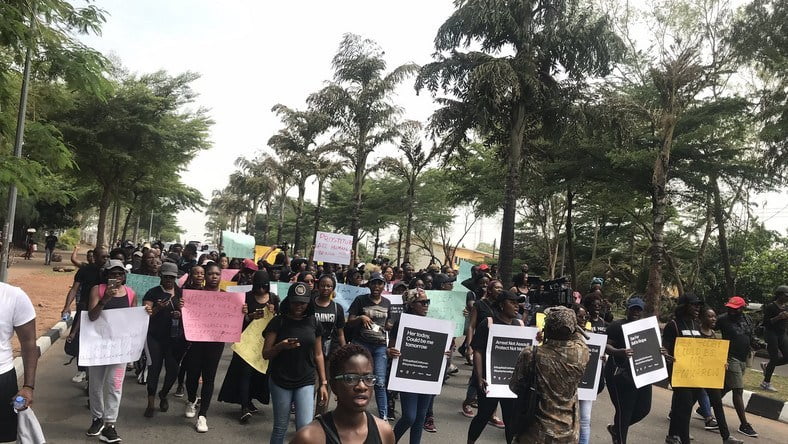 The Police on Friday 16 August 2019 charged the monarch of Obeagu Ugwuaji Community in Enugu South LGA, Igwe Christopher Nyia, with willful destruction of property and attempted kidnapping in his domain.

The Igwe was however released on bail and told to appear in Court on 2 September 2019 for hearing of the case.

In the charge sheet presented to court, Igwe Nyia was alleged to have embarked on willful destruction of property of a townsman, and attempting to kidnap a five year old.

The Igwe was said to have been arrested by a team of policemen from Abuja who claimed to be officers of the Federal Special Anti-Robbery Squad. The team was led by an assistant inspector, Mr. Matthew Alli

Initially, the community feared that the Igwe was picked up for robbery but on Friday 16 August, he was charged instead with attempted kidnap of the 5-year old.

The little girl in question is the daughter of a prominent indigene of the town who is locked in combat with the Community over what was described as arbitrary sale of community land.

E-Metro News gathered that the town is ranged against alleged community land speculators.

It was also alleged that the arrest is one of the many plots to embarrass the Igwe and deal with townspeople that support him.

On Friday 16 August when the Igwe was first arraigned in court, the people of Obeagu came out in their numbers to protest at the court premises.

The protesters were led to the court by the community’s traditional prime minister, Chief Boniface Ani, who told newsmen that Igwe Nya is having problems with their community members who are into land speculation.

“This is the cross he is bearing for refusing to be intimidated by people who want to sell off our ancestral assets,” Mr. Ani said.

Igwe Nyia was charged at the Enugu South Magistrates Court presided over by Mr. APC Amalu for crimes he allegedly committed in his domain.

Among the charges levied against him are willful destruction of property valued at million and detention of a little girls against her will, and attempted kidnap of the little girl.

The Igwe pleaded not guilty to the charges and pleaded for accelerated and even development.

However, the Igwe’s lawyer, Prof. Osita Ogbu applied for outright dismissal of the case as it had earlier been heard and dismissed by the courts in 2016. The case was dismissed for lack of diligent prosecution, he said.

“We urge the court to quash the charges and discharge the accused person as he is not charged under any valid law,” he said.

The prosecutor, Mr. DT Abi, opposed the bail on  the grounds that the charges were serious; he also argued that although the case was heard in 2016, it was dismissed due to a technical challenge.

“The police have the powers to re-arrest and bring the accused back to court. “,this);t