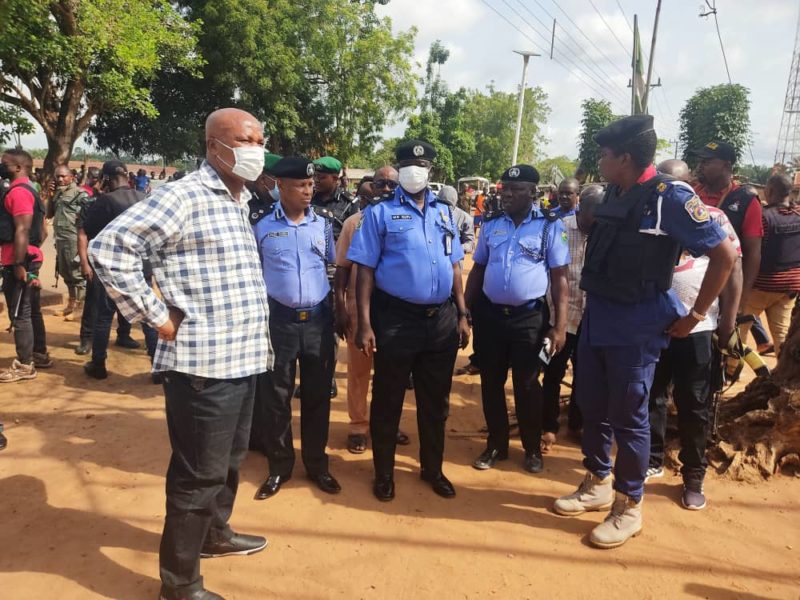 The Enugu State Government used the same adjectives as did the State Police Command in separate statements describing yesterday’s clash in New Artisan Market Enugu City. In their statements, Government and Police blamed “miscreants,” “hoodlums,” and “undesirable elements” for the botched attempt to demolish the market.

One central issue played out in the statements. They both identified that there were good people, as there were bad, in the place. As usually happens in life, the actions of the bad people affected the good and everyone was marked for eviction. The target of the demolition were the bad eggs in the place.

Our findings suggest that dealing with the security threat the market poses is at the root of the decision to demolish the stalls and return the land to its owners. We learnt that the market became a crime colony almost from the time that Fulani livestock traders were evicted and relocated from their Old Artisan Market location on Ogui Road to the present site near the upscale Independence Layout. Enugu Metro learnt that, for a very long time, government and security agencies looked on helplessly as New Artisan Market became a crime colony where the law could no longer reach. Apart from playing host to visitors from the northern states, the market gradually transformed into a safe haven for local criminals, drug pushers, and commercial sex workers. It became an impossible beat for the police.

Matters came to a head on 17 December 2016 when a policeman on duty in the area was brutally clubbed to death by a criminal gang in the market. Although Police promised an immediate arrest of the culprits and a crackdown on the market, not much happened thereafter. Citizen outrage over the murder of policeman, Emmanuel Ugwu, died down without the police apprehending his killers. It was during this period that the Enugu State House of Assembly ordered the shut down of the market.

Members of the House Committee on Commerce and Industry gave the order the day after the murder, when a team visited the Market. The lawmakers had observed the unsavoury sanitary condition of the market and noted that the area had become a breeding ground for criminals.

Most Enugu residents are aware that in addition to a constant stream of suspected criminal elements from outside the state, Artisan Market stall owners converted their stalls to makeshift residence for commercial sex workers. The area also became a popular rendezvous to buy and use weed and other hard substances.

On the flip side, the New Artisan Market is also a recruitment centre for able-bodied northerners who act as security guards, construction workers and handymen for landlords and wealthy individuals in Enugu and the South East region. The market is one of the first ports of call for northern youths who have been streaming to the South East since the Covid-19 pandemic broke out. From this location, they are dispatched to homes, offices and other service locations in the region. Our findings show that the security agencies have identified the area as a potential or actual safe zone for criminal gangs attacking police formations and killing policemen in the region. This explains why the government and security agencies promptly united to launch a bid to displace them.

The ease with which they withdrew AK-47s to battle a police and military detachment to a standstill spoke volumes about what is being hidden in the enclave. The criminals were able to repel the incursion and turn around to inflict heavy damage. Police said they “obstructed vehicular movement, injured unascertained number of persons, vandalized two caterpillars that had gone to carry out the demolition exercise and set ablaze three vehicles.”

Although government and the security agencies are united in the goal to free the market from criminal control, the Enugu State government had another worry on how this action will be interpreted. The State Government therefore worked a fine line in dealing with the good people in the market, in order not to make this look like an ethnic conflict issue. In its statement, the Administration spoke of efforts made to quietly depopulate the area without hurting the good people and how this effort was hijacked by those who were profiting from the criminality in the area.

“The Enugu State Government, law enforcement agencies and the leadership of the predominantly Hausa merchant community of New Artisan Market were duly briefed on the intended execution of the judgement and its implications,” the statement began.

“In line with good conscience and utmost regard for human dignity, a robust plan was set in motion to resettle these traders whose importance to the economy of the State cannot be underestimated.

“While the leadership and genuine members of the business community peacefully and gladly leveraged on the alternative property benevolently offered by the peace-loving Governor of the State, some miscreants and hoodlums who had apparently reduced the property to an abode of criminality and immorality capitalized on the prevailing circumstance to instigate a crisis…”

The Governor went on to talk about how he promotes peace and instills “the spirit of harmonious coexistence of law-abiding residents within the state without prejudice to ethnic or religious sentiments.” He promised that this policy wiil not be thwarted by acts of “brigandage, disobedience of court order, gimmick or brazen lawlessness.”

It was also a masterstroke for government, army and police to stand behind the original owners of the land to execute the plan to sanitize the area and flush out criminal elements therein. As one government official put it, “no one expected that the Fulanis will condescend to approve that their place be turned into a colony of thieves and prostitutes.”

In the final analysis, it has become obvious that the Enugu State Government has marked New Artisan Market as the darkest security spot in the State. The implication is that the security agents will reinforce to launch another demolition operation on the market, as the Governor promised in his statement. The only fear is that the element of surprise has gone and a second confrontation may therefore likely be bloodier than yesterday’s clash, unless well-meaning northern leaders intervene to get the leadership of the market to capitulate. There is comfort in the knowledge that both the army and the police are united in the effort to dislodge the criminal elements that have given New Artisan Market Enugu a bad image.