How Fr. Offu was murdered 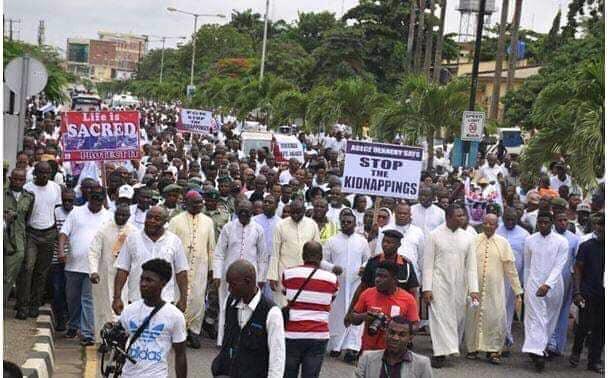 When Rev. Fr. Paul Offu, parish priest of St John the Greater Catholic Church, Ugbawka in Nkanu East LGA, left the meeting of Parish priests of Enugu Diocese yesterday to visit a mentor in Awgu LGA, little did he know that this was going to be a fated journey. He did not reach his destination and neither did he return alive.

He told his brother priests as he was setting out that it has been a long time since he last saw his mentor, Rev. Fr. Charles Ukagha. Rev. Charles was a priest in his hometown of Okpatu when he was growing up and he it was who inspired him to become a priest.

To him, this was as good an opportunity as any to go and pay the old man a visit.

Driving with a young man by his side to Agbudu, the parish where the famous Rev. Ukagha is staying, everything went well until they passed the junction where the Ihe-Isu Awaa-Agbudu road intersected and he was on the Agbudu stretch. This junction has become a black spot, as at least two kidnapping incidents have been recorded there in the last six months.

According to an eyewitness, there were four young men who jumped out of the bushes, aimed their AK-47s rifles, and began shooting at the blue Hilux Toyota van that Offu was driving.

Contrary to what the bandits expected, the Reverend did not stop his vehicle which was being greeted with a hail of bullets; he rather fed gas to the engine and whooshed past the shooting gangsters. Undeterred, they continued to pump bullets at the back of the fast receding car, aiming for the tires to abruptly halt his movement. The car left the gang behind and, when Rev. Offu was getting close to their destination, he saw a small group of villagers ahead, discussing on the road.

Thinking he was on safe territory, Father Offu killed his engine when he got to the group and then stepped down to examine how much damage the rain of bullets did to the van.

He never knew that danger was still lurking behind, not until he and the group of people helping him to look at the bullet scars began hearing running footsteps as the four Ak47-wielding young men bounded towards them. They began shooting sporadically into the air, causing panic and pandemonium and everyone, including the priest and his co-traveler, dashed into the bushes.

“It was an eerie sight,” another eyewitness told E-metro, because those boys appeared to know our bushes better than us who are in the village. They cordoned off the place and were encircling the area where the Reverend and his boy ran towards, until they got them.”

The villagers who understand the language said that the gang members spoke Hausa. According to one of them, they were arguing among themselves what to do with the priest.

“I’m sure they didn’t know he was a priest because he was in mufti. They probably mistook him for a money-bag who was trying to be clever, maybe because of the vehicle he was driving.”

“They spoke Hausa,” another witness confirmed. While one of them wanted the priest to be kidnapped and a hefty ransom demanded for “giving them trouble,” the leader of the gang wanted him executed as a warning for anyone else who would dare to escape from them when accosted.

“We kill him,”  he ordered, and immediately the Reverend was pumped full of bullets and he collapsed.

When the priests of Enugu Diocese heard this story today, they were enraged. This was the sixth priest that was waylaid and shot at by bandits in the past three months. Three of the priests have received bullet wounds and two of the three died in the hands of the highway bandits.

The Director of Communications of Enugu Diocese, Rev. Fr. Benjamin Achi, confirmed to us that the third priest who escaped with his life to tell his story is alive but has a bullet lodged in his leg that is yet to be removed.

“His name is Rev. Fr. Paulinus Iloh of the Nomeh Parish. He was also coming to Enugu when he was ambushed and shot at, but he was lucky to escape with his life.”

The Reverends who were attacked but escaped all confirmed that the people who shot at them were herdsmen.

To the priests who were gathered at the Holy Ghost Parish hall, this was a delicate situation that needed a matured strategy to tell the hardworking Governor of Enugu State that Catholic priests of Enugu Diocese have had enough, while recognizing the efforts he was making to maintain the state of peace that the state has hitherto enjoyed.

Our message to the Governor was simple, Achi said:

“For many years, we have lived peacefully with Fulani herdsmen and other core Northerners in Enugu. Many of them can legitimately claim citizenship of Enugu because they were born here, they schooled here, many are working here;  their children and some of their parents speak our language. They are one of us.

“We are now being confronted with a situation where criminal gangs have recently arrived from the north to infiltrate and mingle among the good people we have known, the peaceful people we know, and these gangs are visiting bloodshed and untold hardships on our people.

“These criminal gangs are killing our people, raping our women, kidnapping those who have money, and generally putting fear into everyone.

“But we cannot live in fear in our own land. So, our message to the peaceful people we have known all these years is this: It is your responsibility to identify and expose these criminals that have come to infiltrate your ranks. If you do not bring them out to face justice but continue to shield them, then we will no longer trust you as the peaceful people that we have known and, if trust is destroyed, then your continued stay among us will begin to cause a lot of discomfort for us.”

Another Reverend who attended the meeting and was at the protest decision meeting told E-Metro that the message for the Governor was carefully considered and the manner of delivery was also agreed on.

“We were not going to wait around for the Governor to respond to us. We know that he is capable of handling the situation, and we wanted him to know that if there is any time that is best to manage the crisis, that time is now.” :