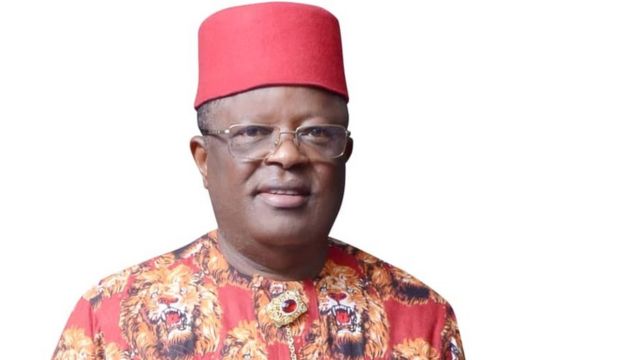 The electoral umpire cited a dozen conflicting judgments on cross-party membership that made it impossible to decide.

Judge Inyang Ekwo ruled that Umahi should give up his position for joining the ruling All Progressives Congress (APC).

Umahi won elections twice as Governor on the platform of the People’s Democratic Party (PDP). The judge said the law recognizes PDP as owners of votes cast in both elections and not the sponsored candidates.

INEC said yesterday that it could not act on the judgement because of contradictory court rulings from other similar courts.

The agency initially met on 17 March to deliberate on the Abuja High Court judgement which sacked Umahi from power.

“…he Commission met on Thursday 17 March 2022 on the matter, decided to defer its deliberation on the Ebonyi cases and stepped down the listed Memorandum to enable its Legal Services and Clearance Committee to study the new processes served on it in the light of the previously served ones and advise the Commission comprehensively.

“Since then, the Commission has been served yet more Court Processes on the same matter, bringing the total to twelve.

“The Commission deliberated extensively on these cases and decided to further suspend action on the defection of the Governor and Deputy Governor of Ebonyi State and sixteen members of the State House of Assembly from the Peoples Democratic Party (PDP) to the All Progressives Congress (APC) in the light of the conflicting judgements and orders served on it from Courts of coordinate jurisdiction.

“The Commission also considers it prudent to stay action on the conflicting judgements and orders being aware of the pendency of Appeals and Motions for Stay of Execution of some of the judgements before various divisions of the Court of Appeal.”