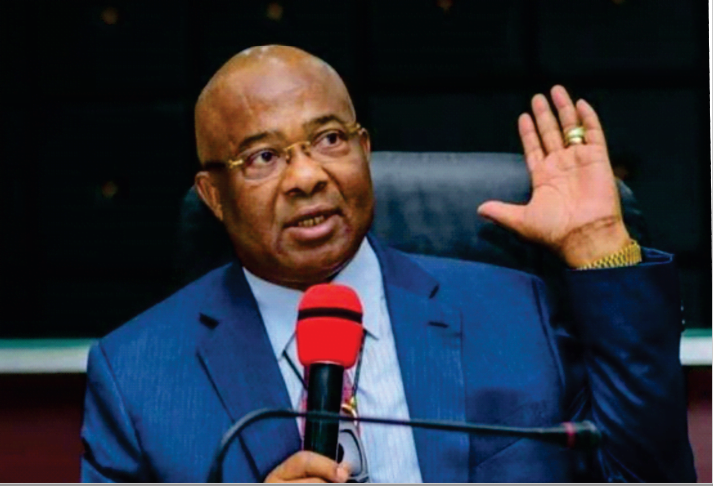 The State Governor had announced that the President wii visit tomorrow to commission projects executed by his administration.

However, IPOB faulted the visit in an announcement last night by one of its Coordinators, Maazi Chika Edoziem.

Instead, Edoziem “ordered” Southeasterners to observe yet another sit-at-home tomorrow.

The announcement adds to the burden of Southeasterners who have been forced indoors every Monday for four weeks running.

IPOB said that President Buhari is not welcome in Southeast so long as Maazi Nnamdi Kanu remains in DSS custody.

Edoziem however described tomorrow’s exercise as an “emergency Sit-At-Home” targeted specifically at the President’s visit.

“Down in the entire southeast, residents are to observe a dusk to dawn (sic) curfew.

“Stock your homes with food items so as to avoid being a scapegoat,” he advised.

Predictably, the IPOB “order” came with threats of sanctions against those planning to join the President’s welcome party.

“This Thursday will be very dangerous for those who have ears but could not hear.”

“Do not allow stray bullet to take your life; kindly stay at your home till dawn

“(We feel) sorry for the Traditional rulers who will organize people to welcome him in Imo State.”

A group claiming to be Ohanaeze Ndigbo, however, dismissed IPOB’s order as illegal and asked citizens to troop out “en masse to welcome the President.”

A statement by Dimm Uche Okwukwu, “Deputy President General, Ohanaeze Ndigbo Worldwide” warned about the dire implications of being hostile to the President.

The IPOB order portrays Imo people and the larger Igbo population as hostile to the Office of the President, the group warned. It also implied that shunning the President will jeopardize the quest for Igbo Presidency 2023.

Enugu Metro however confirmed that this group does not represent the recognized Ohanaeze Ndigbo led by Prof. George Obiozor.

Mainstream Ohaneze group members contacted by us noted that the socio-cultiral organisation has not met on the issue.

The group that issued the statement was dismissed as “impostors using the Ohanaeze name for pecuniary gains.”