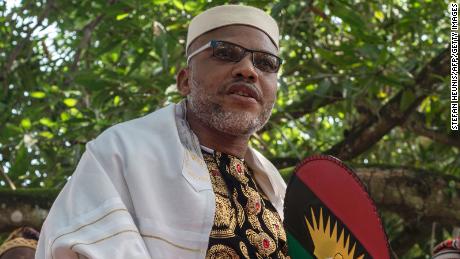 Biafra activist, Mr. Nnamdi Kanu meets with his legal team this evening as DSS approves application to visit him in detention.

“We have just received a communication approving our visit to … Mazi Nnamdi Kanu,” he said.

“Shall keep the World posted on the outcome, immediately after the meeting, later in the Day. God is with us,” Ejiofor said.

The application to meet with Kanu was made yesterday 1 July 2021, the lawyer said.

“Very suprisingly, the SSS is yet to approve,” he said last night.

Ejiofor deplored the fact that Kanu “was abducted in a foBiafra activist, Mr. Nnamdi Kanu meets with his legal team this evening as DSS approves application to visit him in detention.reign land and consequently marshalled before the Federal High Court No 2 Abuja, in a suspicioous circumstance, and without my knowledge as the substantive Counsel in the Matter.

“This drama took place in Nigeria Court, in gross violation of his Constitutional rights to fair hearing.

He threatened to return to court to ask that Kanu be transferred away from DSS custody if the team was disallowed from seeing him.

“DSS custody shouldn’t be the appropriate custody to keep our client because they are hostile not only to we lawyers but his relatives too.

Ejiofor said yesterday that there is a real concern about Kanu who is on medication.

“As it stands today, we can not verify the health status of Mazi Nnamdi Kanu who has hitherto been on a daily medication.

“It is most plausible, that following retriction placed on visiting him, he may have been subjected to all forms of inhuman treatments.

He suggested that potential ill-treatment could range from “torture, roughhandling and threats, all targeted at extracting confessional statement from him.”

“The World is hereby placed on notice that if anything happens to Our Client, Mazi Nnamdi Kanu, who is presumably being subjected to these inhuman treatments, the Nigeria Government will be held responsible.

“Our Client is inherently and constitutionslly presumed innocent of all allegations against him, particularly now the Government has submitted to judicial process.

“We still apply for calm from all corners as we expedite legal action,” he concluded.”