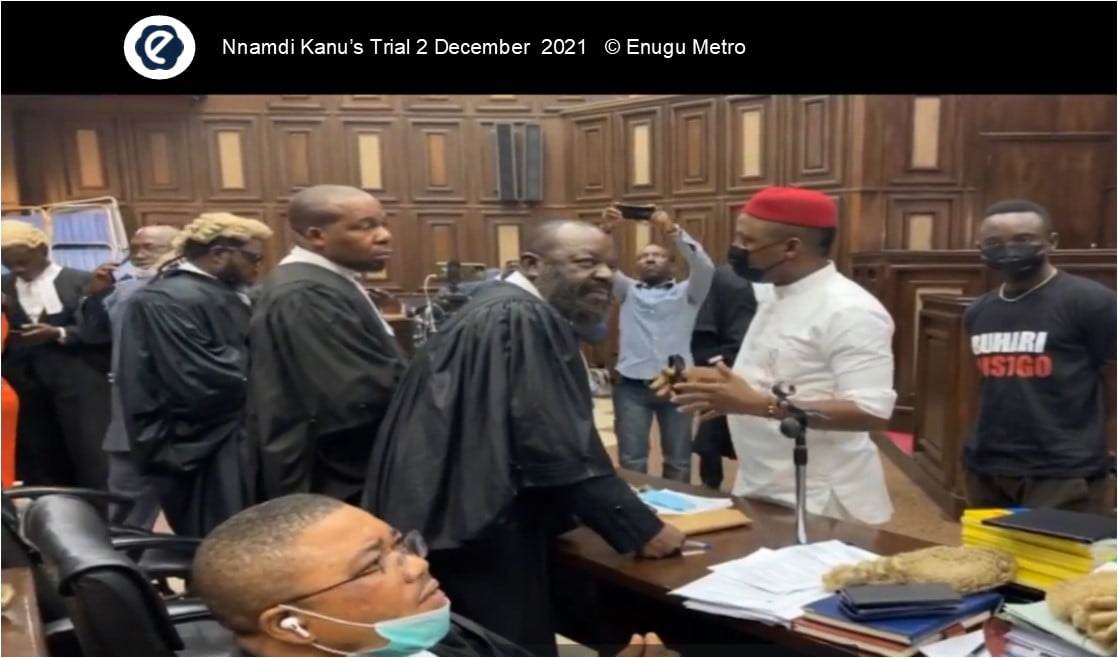 Kanu is still detained in a DSS facility and was not transferred to a correctional centre, as originally published. We were misled by someone who was in court and wasn’t paying attention to the instructions of Justice Nyako. We apologise to our readers for the false report.

Kanu was to appear today in response to an emergency sitting requested by his defense lawyers, following last month’s fiasco.

The defense scored a minor victory as trial judge granted their plea to have Kanu be granted more freedom in detention.

The Department of State Security (DSS) held Kanu in its facility since his interception and return from Kenya.

The DSS did not bring Kanu to court and this gave more lawyers and interested visitors unfettered access to the courtroom.

Below is a Summary of Mazi Nnamdi Kanu’s Court proceedings of today, 2nd December

First, there was total absence of security operatives in court and around the outer perimeters as was the case during previous proceedings.

Second, Mazi Kanu was not in court and there was no officer from the DSS to explain why. But from what I surmised, both the court and the DSS might’ve concluded that his presence in court was not strictly required in the sort of application that was moved in court today. However, we still protested his absence in court.

Third, the court did not grant Kanu’s Legal Team the leave to move our pending application challenging the jurisdiction of the court to continue the trial. Recall that we had filed such application, arguing that the extraordinary rendition of Kanu constitutes a constitutional barrier to his trial. The court ruled that the application was not calendared for hearing today; and that will be heard at the next adjourned date.

Fourth, the court, after going through what it called a tight judicial calendar, moved the date of the next hearing backwards from 19th to 18th January, 2022.

Finally, the court ruled that it will entertain all outstanding applications at the next hearing; and proceeded to make the following Orders:

1, That Mazi Kanu be given maximum comfort possible in the detention facility.

2, That he be allowed a change of clothing.

3, That he be allowed free practice of his Jewish faith including access to his Jewish religious materials.

4, That the DSS obey all previous orders granted in the matter, including allowing Kanu any visitor of his choice.

5, That Kanu be permitted, at his option, to mingle freely with other inmates or any other persons at the detention facility.