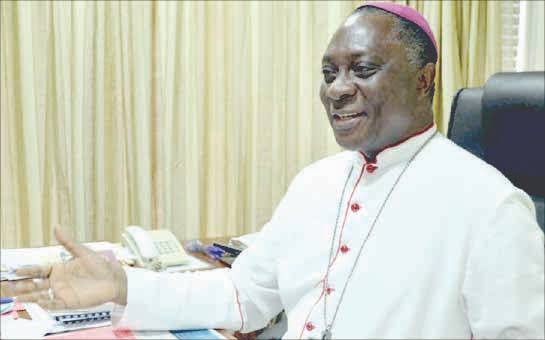 A video of the priest where he banned Igbo songs and made other deprecatory remarks went viral on Sunday.

He described the remarks made during a mass as “unsavoury” and “completely unacceptable.”

Witnesses said Fr. Anelu began the assault by banning an Igbo tune about to be sung during second collection at mass.

He feared that Igbo could “dominate as they did in Benin to the point of becoming the Bishop in person of Akubueze,” witnesses said.

He was also quoted to have said that the spirit of God in any place “recognises only languages indigenous to that geographical location.”

These messages irritated Archbishop Martins who wasted no time to send the priest packing from the parish.

Archbishop Martins said the priest’s remarks “do not represent the Catholic church’s position on the common brotherhood of peoples of all tribes and religions.”

“For this reason, he has been asked to proceed on an indefinite leave of absence to give an opportunity for a thorough investigation of all the matters relating to his ministry on the parish.

“The leave of absence takes effect from (today), February 8, 2021, till further notice,” the Archbishop said in the disclaimer.