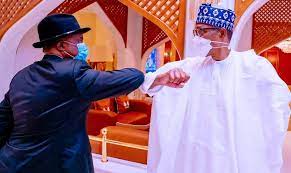 The Governor hurried to Abuja to meet with President Buhari and report what the attorney-general said after yesterday’s meeting of the Federal Executive Council.

He emerged from the meeting to tell reporters that the President was quite opposed to the idea, calling it an intimidation tactic.

Anambra is holding a governorship election on 6 November amidst rising violence and murder of innocent people.

Violent elements from the separatist group, IPOB, say they do not want elections to hold in Anambra. They also go around threatening and assaulting politicians at campaign rallies.

Although they continually threaten “defaulters” with violent death, IPOB however quickly denies responsibility each time a citizen is murdered in Anambra.

Why we are thinking of emergency rule in Anambra

He cited gradual breakout of violence and disruption of rallies by IPOB separatist group as reasons to declare emergency rule.

“When our national security is attacked, and the sanctity of our constitutionally-guaranteed democracy is threatened, no possibility is ruled out.

“So, within the context of these constitutional obligations of the government or the desire to establish democratic norms and order, there is no possibility that is ruled out.

“You cannot rule out the possibility of declaration of state of emergency where it is established, in essence, that there is a failure on the part of the state government to ensure the sanctity of security of lives, properties and democratic order.”

The State Government however put up a spirited defense today, saying it is a desperate plan capture to Anambra State.

Anambra Fights Back, calls it politics

The state accused ruling All Progressive Congress (APC) of importing violence into the Anambra to actualize the plot.

The (attorney-general’s) statement confirms the “worst fears of the Nigerian people that politicians outside Anambra … are behind the recent spate of killings in the state,” Adinuba said.

Their goal, he said, is “to frighten people from coming out to vote in the forthcoming polls, thereby enabling them to write the results they like.”

He passed the buck for inability to arrest the breakdown of law and order to the federal government.

Instead, he said this is “a strong indictment of President Muhammadu Buhari” who commands all security agencies in the country.

Analysts are worried that the Anambra State Government is busy passing the buck on breakdown of order in the State, rather than manage the challenge.

Yesterday, an adviser to the Governor hit out at South East Governors, accusing them of being responsible for the violence in the State.

The State Government has also accused opposition politicians for the violent killings and disruptions being witnessed at party rallies.