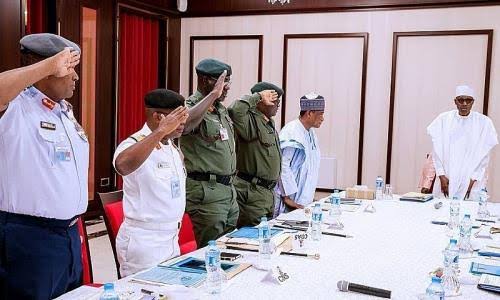 All four Nigerian service chiefs resign and are promptly replaced, amidst growing insecurity and ethnic tensions in Nigeria.

“I have accepted the(ir) immediate resignation and their retirement from service,” Buhari said in a State House statement today.

President Buhari thanked them “for their overwhelming achievements in our efforts at bringing enduring peace to Nigeria.”

Their replacements also announced today by the President include:

Eyebrows are raised at the appointment of Maj. Gen. Ibrahim Attahiru as Army Chief, after failing as a war commander.

Attahiru was appointed to lead the offensive against insurgents in May 2017 and given 40 days to capture Boko Haram, leader Ibrahim Shekau.

His appointment witnessed a step up of attacks, including massacre of 50 persons in a mosque, that he had no answer to.

He was subsequently removed in December 2017 as commander of the forces battling insurgency in the North East.

The departing service chiefs were appointed in July 2015, initially on acting capacity.

Nigerians have repeatedly pressed the Presidency to fire the service chiefs for incompetence but Buhari refused to budge.

This was despite the fact that they all stayed beyond their mandatory four-year tenure while some overstayed their service years.