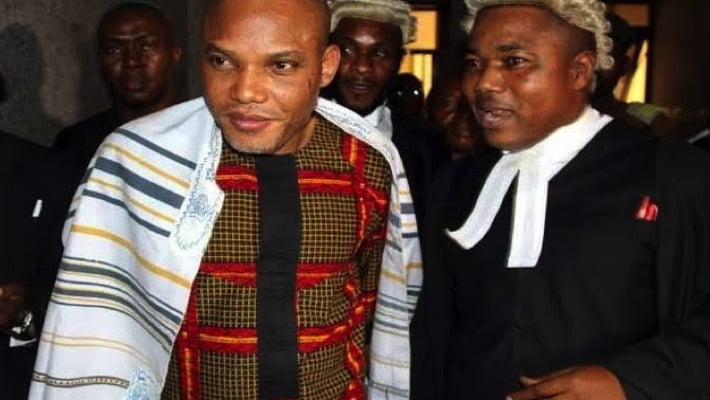 Ejiofor disclosed in petitions to foreign institutions last week that this condition gradually depletes potassium in his system.

The condition, he said, “defied every medical solution so far given to him … (by) the Department of State Security.”

The lawyer drafted separate petitions to the UK and US governments, and to the United Nations (UN).

Collectively, the letters drew attention to his poor health, poor living condition, and violation of his rights.

Mazi Kanu is being detained at a Department of State Security (DSS) facility in Nigeria’s capital city, Abuja.

Ejiofor described Kanu living quarters as “a tiny cell” with no access to anyone else but “handlers who bring food.”

This arrangement exposes him to mental and psychological torture, the lawyer said.

He therefore accused DSS of attempting to break Kanu’s spirit and get him “to admit guilt (to) an offence he never committed.”

“(Kanu) is forced to sleep on a tiny mattress without pillow, an unhealthy living condition” that further deteriorates his health.

“(This) has led to his developing acute acid reflux with consequent intense chest pains and extreme difficulty in swallowing.

He said Kanu’s condition violates the 21 October 2021 order by Justice Binta Nyako that he be “given maximum possible comfort in his place of custody.”

“Subjecting our client to mental and psychological torture is a grave infraction on his right and a crime clearly prohibited under Section 2 of the Anti-Torture Act 2017 and punishable under Section 8 of the same Act.

“This law prescribed a maximum punishment of 25 years for erring officials of the Detaining Authority found to be in violation of this law.

This grave infraction on our client’s right by operatives of the Department of State Security has continued unabated,” he said.

The lawyer also complained about the poor quality food served to his client despite court instructions against doing this.

He said the Agency recently replaced decent meals Kanu was being served “with poorly prepared food.”

The lawyers urged the oversea authorities to press Nigerian security and court institutions to respect the rights of the detainee.

In particular, the lawyer reminded the UK Government that Kanu is her national deserving of diplomatic assistance.

“We … respectfully call for an aggressive diplomatic engagement/effort to ensure that our client is released unconditionally in the shortest possible time.

This, according to him, is because Kanu was “extraordinarily renditioned” to Nigeria against diplomatic and international legal conventions.

“The Nigerian Government should not be allowed to benefit from its wrongdoing.