No tears for Obiano 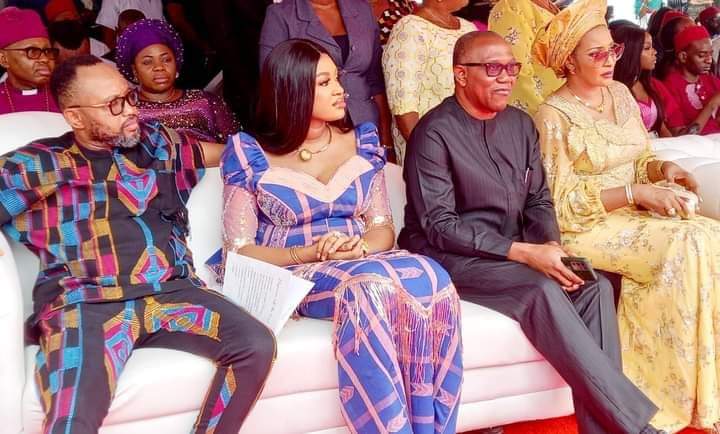 In No tears for Obiano, Tai Emeka Obasi says no one can pass through what Peter Obi endured in the hands of the ex-governor without snapping.

When I saw the picture of HE Peter Obi sitting calmly at the Slapping Arena last Thursday, I fought hard to hold back the tears. To me, that was the picture that mattered most in all the activities that heralded the coming to power of Governor Chukwuma Soludo.

Ex-Gov Willie Obiano exited in characteristic fashion with his wife exhibiting the rascality that marked their eight very regrettable years in Anambra State Government House. History has a way of shaming liars and propagandists. Mrs Ebele Obiano proved to the visitors that witnessed her madness that most things, if not all, written about her uncultured excesses were fact-based.

But this is not about the Obianos and their weird behaviours.

This is rather mainly about that man that came far ahead of his generation.

Around May 2018, shortly after Obiano was sworn in for the second term in office, I was privileged to be part of the team that went to the Akanu Ibiam International Airport in Enugu to welcome the man we call Okwute home after about a three-week trip abroad.

We were in a four-vehicle convoy and I was with him in his vehicle. We had passed Four Corner and into the usually lonely stretch through Udi Hills on our way back to Onitsha. I was going through the daily newspapers we bought at the Airport when the Boss suddenly said, “Tai, did you see that?”

I snapped to attention, “what Sir?”

“That Sienna vehicle parked inside the bush?”

Okwute ordered his own driver to stop and turnaround. Only the three of us in the vehicle knew why we were reversing at that very dangerous spot. But the rest, including the DSS and other security personnel in the other three vehicles, knew that odd moments abound when your itinerary involved being part of Okwute’s convoy. They all reversed and followed us to the spot.

“She could be in danger,” was all that Okwute muttered as we arrived at the scene. I now noticed for the first time that a Sienna vehicle was parked inside the bush, about five metres from the road. A woman was visibly sitting behind the steering, the lone passenger in the vehicle.

Our DSS leader of the security was down from the vehicle in a flash, his right hand behind his back. Knowing where he preferred keeping his gun, I needn’t guess what that right hand was romancing.

But because only Okwute’s own driver and I knew why we turned and the driver shouldn’t leave the Boss’ vehicle at such situations, I knew exactly what to do. I came down quickly. The other policemen in the leading and rear Hilux vans had all come down, their AK 47s at the ready.

I quickly told the head of our security, who had already guessed. Give it to Joe, he’s as smart as they come.

Arinze, the indefatigable PA was also down from the second jeep. He was approaching to know why we stopped but Joe waved Arinze and I back. Joe now approached the Sienna with professional caution, with all the other security personnel covering him. It was then that I realised how dangerous a mission we had undertaken. If that was an ambush there could have been sad tales.

Joe just ordered the woman to come out of the vehicle. The woman, shaking like a leaf, hastily obeyed.

She was alone in the vehicle as Joe confirmed. She was not being kidnapped or robbed. Her vehicle didn’t veer off the road. They were there to harvest vegetables from the farm. We saw two other women doing the harvesting about 50 metres away.

Seeing all was clear, I moved in to reassure the very scared woman.

“Don’t be scared. We thought you were in danger and only wanted to help. Have a nice day Madam,” I offered, believing she needed such assurance from a civilian.

The woman relaxed for the first time and started thanking us for such thoughtfulness. She must have been a teacher. I noticed she was directing all her nice words at me. We waved bye, entered our vehicles and resumed our journey.

“That was very thoughtful and kind of you, Sir,” I told the Boss once we went on our way.

“We should always do what is required of us at all times,” he returned.

“But I took your glory, Sir. You should have come down. I’m sure she would have recognised you. That woman’s story is incomplete without the man behind such gesture,” I countered.

“Tai, I didn’t do it for the woman to applaud me personally. I did it because it was the right thing to do. We’re privileged enough to be moving with security. It is our duty to use same security to save people who voted us into power when we meet them in such conditions. Always learn to do the right things to enhance the society. Don’t bother about the applause. Just do what is right and move on,” the Boss educated.

“Thank you for this education, Sir,” I returned and went into deep thoughts, the newspapers forgotten. Staying close to Okwute may not improve your bank account balance. But growing in wisdom is a huge certainty.

I suspected before but I affirmed from that day that the former governor was not grieving for any ill-treatment from the man he put into power based on personal basis.

Okwute was deeply pained when he saw the education he had put on the top of the ladder amongst other states in the nation gradually deteriorating while propaganda and outright lies were being used to cover up.

He grieved deeply when he was told to stop visiting and giving money to schools in his state.

He was deeply pained when the projects he initiated for the good of his dear state were all abandoned.

He mourned when SarbMillar relocated a project meant for Anambra State to Ogun State.

He held back the tears when the money he saved in dollars were withdrawn and squandered.

He grieved when he was stopped from paying taxes that would have helped to develop his state in Anambra. Even though paying in neighbouring Enugu State isn’t a sin but that was one IGR generation gone astray.

He felt deep pain that the man he put in office didn’t match UBEC’s counterpart funding for education and didn’t draw from it for eight years.

He mourned when all the ICT and internet facilities he installed in Anambra schools were allowed to rot away.

All through eight years of HE Obiano, Okwute was never invited to any state function. So when I saw him present at Prof Soludo’s inauguration, I prayed that the man from Isuofia could do me the favour of going back to all that were damaged by his predecessor and then push Anambra really forward again. That is all he owes Okwute and not even the allowances due him as governor that Obiano seized for eight years.

Nobody could have endured what Obiano did to this great man without one public word to fight back. Okwute is a rare breed. God loves Anambra to have given him to us. Nigeria should be much better to tap from same blessing.