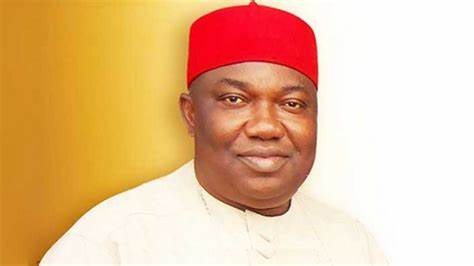 An Nsukka group from Enugu North District tasks Gov Ifeanyi Ugwuanyi to sacrifice his Senate ambition in interest of fairness.

The partisan group operating under the umbrella of Nsukka Forum for Fairness and Equity (NFFE), on Tuesday told Governor Ifeanyi Ugwuanyi to perish his ambition of retiring to the red chamber of the National Assembly to represent Enugu North Senatorial District.

The group characterized his ambition as “inordinate,” considering that he is usurping the turn of Nsukka/Igbo-Eze South Federal Constituency.

They pleaded with the governor to respect the existing unwritten zoning arrangement in Enugu North Senatorial District.

They reminded Ugwuanyi that it is the battle he is fighting for Enugu East on governorship that he is denying in his own district.

A statement signed by Group Coordinator, Mr. Obetta O. Obetta urged the Governor to be a statesman and allow existing zoning to continue.

According to Obetta, “Enugu North Senatorial District is made up of three Federal Constituencies.

“On return to democratic rule in 1999, after decades of military incursion into civil space, Nsukka/Igbo-Eze South produced the Senator that represented Enugu North Senatorial District at the Senate, in the person of Senator Fidelis Okoro, may his soul rest in peace.

“After his two term, it went to Udenu/Igbo-Eze North. When Senator Ayogu Eze finished his second term in the Senate, he relinquished the position to Igbo-Etiti/ Uzo-Uwani.

“Now that Senator Chuka Utazi is rounding up his second term at the Senate, it ordinarily supposed to return to Nsukka/Igbo-Eze South where the journey of the uncoded zoning began seamlessly in 1999”.

The statement added that, “Governor Ugwuanyi lacks the moral justification to move round the other constituencies, that make up the Senatorial Districts especially Nsukka/Igbo-Eze South whose turn it is to produce the next Senator,
to campaign for vote if he chose to truncate the arrangement with his unbridled ambition”.

Mr. Obetta recalled that former Governor Sulivan Chime who chose his successor from Enugu North, had to also sacrifice his Senatorial ambition in the interest of peace, justice, equity and fairness.

He said that the peace Governor Ugwuanyi had enjoyed during his administration is largely attributable to the aforesaid sacrifice by his predecessor, Barrister Sulivan Chime.

The group also admonished Hon. Patrick Asadu who had represented Nsukka/Igbo-Eze South Federal Constituency of Enugu State for twenty years in the Green Chambers of the National Assembly, to try his hand in the Senate-seat and allow Nsukka local government to produce the next member of House of Representatives to represent the constituency.

The group further argued that Igbo-Eze South local government had surcharged Nsukka for twenty years and it is time for Asadu to relinquish the position.

They expressed displeasure over the “alleged horsetrading between Governor Ugwuanyi and Hon. Patrick Asadu to satisfy their parochial and selfish political interests.”