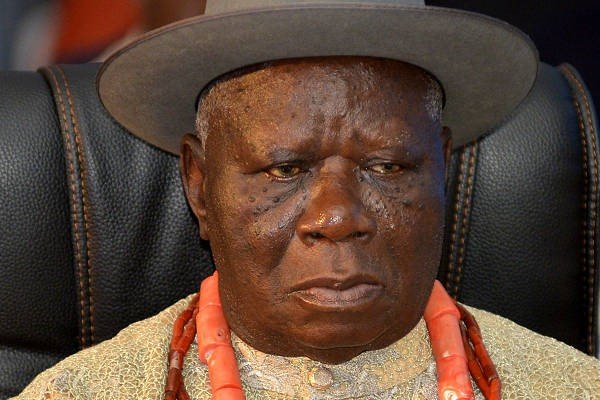 Leadership of Ohanaeze Ndigbo pleads with Chief Edwin Clark today to forgive an unfortunate verbal attack on him by IPOB.

Ohanaeze spokesperson, Chief Alex Ogbonnia, said in a statement that Igbos do not denigrate or disrespect old age.

He described Clark as “a detribalized Nigerian with unassailable love for the Igbos,” who deserves every respect and courtesy.

“It was Clark who has spoken vehemently against the Igbo marginalization and has propelled the concept of a president of Nigeria from the South East.

“It was Clark who had stated that the agitations by the Igbo are justified, among several others,” Ogbonnia said.

He pleaded with Clark, who leads a coalition of southern and Middle-Belt indigenous peoples, to forgive IPOB’s “impetuosity and exuberance.”

“Our profound admiration for hi is beyond measures and (we) will always condemn any form of attack on his person.

“We therefore hope that the unsavory remarks by our youths will not weaken his passion and commitment for the Igbo,” he concluded.

IPOB spokesperson, Emma Powerful had described the elder statesman as a “spent force” who will live in regrets when Biafra becomes an independent nation.

He was responding to Chief’s Clark’s view that IPOB is pursuing the Biafra agitation the wrong way by including everybody in the old Eastern Region into their dream republic.

Chief Clark had stated that those pursuing a new Biafra should remove the non-Igbo parts of the old Eastern Region from the equation.

““How can Rivers State or Akwa Ibom become part of Biafra? They are dreaming for still thinking about the Eastern Region of those days,” he said.