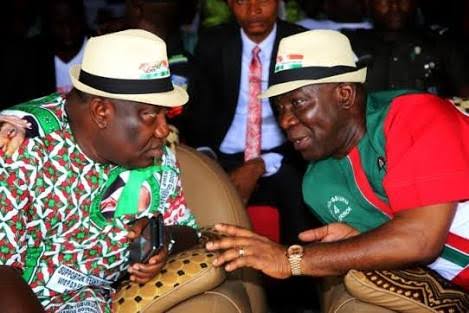 An Enugu High Court will on 28 April hear the argument from an Enugu East group that wants the Senator barred from partcipating in the upcoming PDP party primaries.

Politicians from Enugu East District insist that rotation favoures them to present a party candidate for the 2023 election.

Thus, they argued in court filings that Ekweremadu’s partcipation violates a prior governorship rotation agreement.

The agreement cited is a controversial 2013 minutes of meeting of an expanded PDP caucus group. The meeting was reportedly chaired by former Gov Sullivan Chime.

Incidentally, Chime has disclaimed existence of a formalized zoning arrangement in Enugu. He however supports Enugu East to produce the next governor for the State.

They presented proof of a case listed for hearing by Judge Harold Eya of Enugu High Court on April 28.

The court papers show that one Chief Oforma Mbannaji of Nike Enugu filed the case with reference number E/254/2022.

Offorma said he is suing Ekweremadu for himself and on behalf of the people of Enugu East Senatorial District.

The Campaign Organisation said in a statement that the court action as an “unmitigated and unconscionable act of desperation.”

It accused opponents of plotting to use the judiciary “to obtain … what they cannot obtain in a free and fair contest.”

“Their festival of lawlessness has seen the State House of Assembly, Local Government Council Chairmen, Town Unions, and lately the Enugu State Council of Traditional Rulers, and, in fact, almost every institution that our people hold in high reverence, needlessly dragged into and ridiculed by their reckless 2023 plots.

“Even institutions that have remained apolitical since ages have been both compelled and induced into issuing communiqués purportedly upholding an inexistent zoning arrangement.”

Their goal, he said, is “to stop Senator Ike Ekweremadu’s aspiration and impose their lackeys and relations on the people of Enugu State.”

Those who resist their plots are “threatened, detained in prison or sanctioned,” Asogwa said

He pleaded with state and federal judicial authorities to not complicate the party selection process.

“This is evidently an evil, meretricious, and baseless plot to use the judiciary to abort the popular will of the people,” he said.

“… there is no such organ as an Expanded Caucus in the PDP Constitution and local government chairmen are not members of the State Caucus.

“Therefore, the purported meeting could not have been a Caucus meeting of our great party.

“In any case, it is not the business of the Caucus under the PDP Constitution to zone elective offices.”