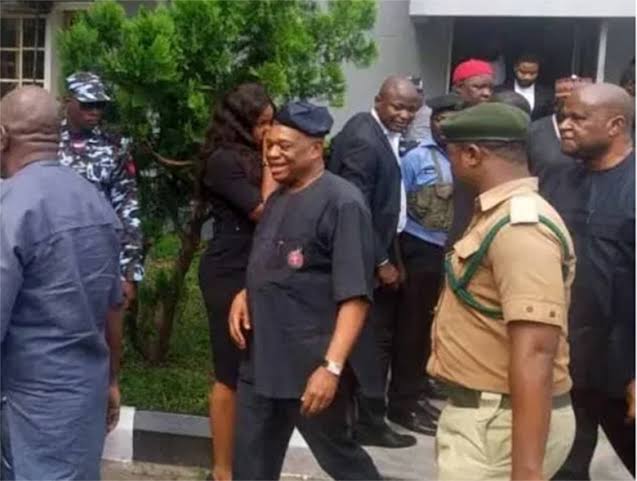 Today marks 100 days of the Abia State former Governor being in jail. He is in the early days of serving his 12-year term.

Time really flies. Nigerians have been without Orji Uzor Kalu for 100 days and only a few noticed.

All his calculations pointed to possibilities of Kalu being saved at the last moment. He too appeared to have thought the trial was a formality. Had the case not run for 12 years?

A Federal High Court in Lagos on 5 December 2019 sentenced Kalu to 12 years’ imprisonment for N7.2 billion fraud and money laundering. Kalu, who arrived the court with all the glory and glamour of the Chief Whip of the Senate, left from the court to the prison in Ikoyi, in such ordinariness that he lost a sense of the environment, asking the warders where they were taking him.

He was later moved to Kuje, the prison in Abuja.

He wiped tears from his eyes as the meaning of the unexpected verdict hit him. The judge had not even finished reading his judgement. An important personality had been reduced to an important prisoner.

Many did not believe it. Neither did Kalu as the warders led him out of the court.

Back in his native Igbere, many thought it was a joke until he did not return for the Christmas celebrations to hold court in his expansive country home, famous for its extensive grounds and the artistry that went into executing it. Their delayed acceptance of the verdict still spawned fresh myths about Kalu, among them, he would be home soon.

While Kalu and his company were found guilty of all the 39 counts, Udeh Jones Udeogu, Director of Finance at Government House, Umuahia, during Kalu’s tenure, was convicted on 34 counts and sentenced to 10 years. Slok Nigeria Limited, the court ordered, should be wound up and its assets forfeited to the Federal Government.

Justice Mohammed Idris said Economic and Financial Crimes Commission, EFCC, had proved that the trio conspired to divert N7.65 billion from the treasury of the Abia State Government. He said that money laundering, which was the major crime in the counts, was a serious crime. He called it an anti-human crime.

The total number of years for the 39 counts against Kalu was 133 years, but he would serve 12 years as they run concurrently.

Kalu made spirited efforts to upturn the verdict on appeal. His grounds included that he needed medical attention from his herbalist. He also claimed that his absence was affecting his work as Chief Whip of the Senate.

The Court of Appeal decided that Kalu had to remain in jail.

It had been a year of mixed fortunes for Kalu who returned to more political reckoning after winning the Abia North senatorial seat in a contentious affair that the Court of Appeal resolved in his favour on 8 November 2019. Less than a month after, he was jailed in a case that began in 2007, when Kalu left office as Governor of Abia State.

His rising political star was eclipsed so suddenly that it tasked belief. The almighty OUK, as his followers amiably call him, could not be one bound for jail. He had made the right political investments, it seemed. Joining the ruling All Progressives Congress, APC, was one of his considered strategies for surviving in the political terrain that had seen him leave the Peoples Democratic Party, PDP. He made many futile attempts to return.

All his calculations pointed to possibilities of Kalu being saved at the last moment. He too appeared to have thought the trial was a formality. Had the case not run for 12 years?

The 5 December 2019 conviction of Orji Uzor Kalu remains a shock. More shocking is that he has remained in jail for 100 days and counting, in sparse settings, confined space, no private jet, and curtailed liberties.

Any lessons for anyone from the times and travails of Orji Uzor Kalu?