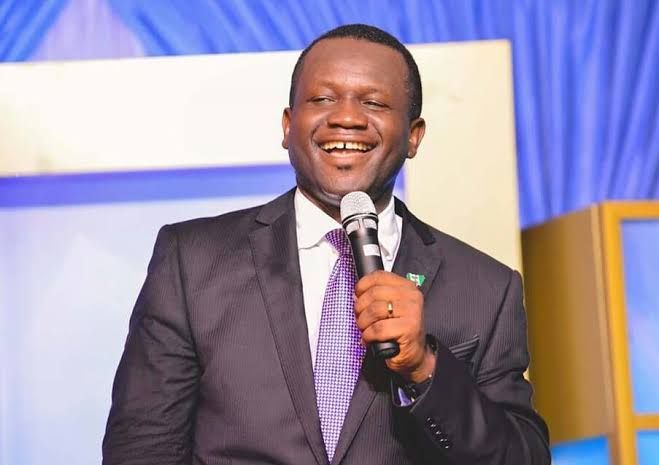 Pastor Ogbueli lights a candle at the UNN leaving Prof. Bennett C. Nwanguma to wonder how it will be when others join to emulate the man of God.

“One often wonders what massive difference it would make if the over 60 generations of UNN alumni were to light candles like Mr Ogbueli just did, rather than just cursing the darkness at UNN”

UNN alumnus and founding pastor of Dominion City International Church, Pastor David Ogbueli has pledged to fund the refurbishing of toilet facilities at the Alvan Ikoku Hostel. He will also build a ten-bed specialist ward at the Medical Centre to which he donated diagnostic equipment and hospital beds during a recent visit.

The visit of an alumnus or alumna to the alma mater can be likened to the visit of a grown man or woman to an aged parent in the village. Even when the parent does not make any specific request, children rarely leave their aged parents empty handed on such occasions. This is because they know their aged parents are often in need of one thing or the other. Thus, in addition to whatever goodies the visiting child may take along, it is customary for the child to find an excuse to also present some money to the parents. This could be for medication or for kola to entertain visitors.

This scenario of a caring child visiting an aged parent played out recently when Pastor David Ogbueli, the founding Pastor of Dominion City International Church returned to his alma mater – the University of Nigeria. Pastor Ogbueli, who graduated from the university in 1987 with an Honours Degree in Chemistry, was in Nsukka to officiate at a programme organized by the Nsukka Chapter of Dominion City International Church which he founded in 1996. To the delight of everyone, especially the Vice-Chancellor, Professor Charles Igwe, and the Dean of Student Affairs, Professor Edwin Omeje, Pastor Ogbueli brought with him a bag full of goodies and pledged to bring more to his beloved alma mater.

Prior to the visit, Mr Ogbueli, like other alumni, had obviously read about the disturbing state of infrastructure, especially the state of the toilets in the student hostels, at the university. He may also have watched video recordings depicting the states of these and other facilities on social media. He went further to inquire about the state of the University Medical Centre so as to ascertain how to help make a difference and change the narrative coming out of his alma mater.

In his words, he wanted to “intervene in areas that would have a direct impact on the lives and welfare of students and staff of the university”. From the feedback he received, he sent his engineers to go ahead of him to meet with the University authorities to confirm the state of the toilets in the hostels and to identify the pressing needs at the University Medical Centre.

On this home-coming trip to his alma mater, Pastor Ogbueli donated a variety of state-of-the-art diagnostic equipment and hospital beds for use at the Medical Centre, and further pledged to provide additional support to improve the efficiency of the Medical Centre. In addition, he undertook to fund the refurbishing of the toilet facilities at Alvan Ikoku Hostel of the University. This is not a mean undertaking, considering that Alvan Ikoku Hostel – which is one of the Franco Hostels – is a massive three – storey complex that accommodates up to 500 students.

By this gesture, Mr Ogbueli stood out as an exemplary and distinguished alumnus of the University of Nigeria. One often wonders what massive difference it would make if the over 60 generations of UNN alumni were to light candles like Mr Ogbueli just did, rather than just cursing the darkness at UNN. Remarkably, Pastor Ogbueli did not stop at these gifts. He pledged to reach out to other alumni to get them to commit to rebuilding their university.

As a matter of fact, the state of infrastructure at UNN and other federal institutions of her generation can be attributed to the perennial problem of underfunding over a period when these institutions recorded astronomical increases in the number of students. As a consequence, most of the facilities, for example, those in the hostels, are oversubscribed, resulting in frequent breakdowns, coupled with the expected age-induced deterioration. The refusal of students to pay the commercial or fair rates for bed spaces over the years continues to limit the ability of the management to effect necessary repairs in the hostels.

For the record, Pastor Ogbueli is not the only alumnus of the University of Nigeria to make a donation or to offer assistance to the University in recent times. In truth, a good number of alumni and alumnae have done so in the past and many more have shown a willingness to do so. For example, alumni of the Faculties of Law and Engineering, Medicine and the Departments of Economics came together recently and are currently funding various projects in their faculties and department, respectively. This write-up has, however, been provoked by Pastor Ogbueli’s unique approach, especially at a time when all sorts of audio and video clips and write-ups on the state of infrastructure at the university have been circulating for all the wrong reasons. It is my hope that Mr Ogbueli’s exemplary response would also encourage other alumni to go beyond just cursing the darkness to seek to light a candle at UNN. There’s no better time to do so than now. May this candle and other candles lit by Pastor Ogbueli and other like-minded alumni shine bright, Amen.