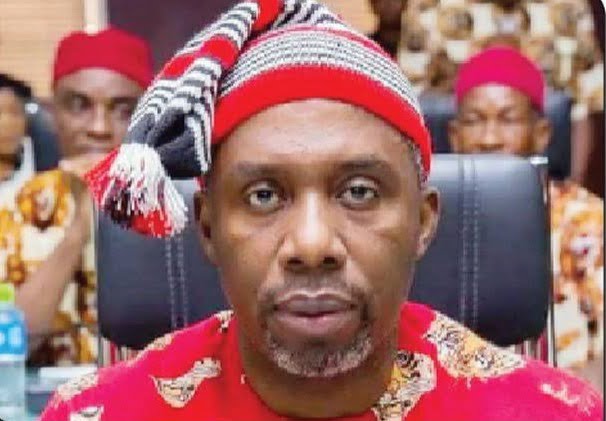 The raid took place this morning at St Peter’s Anglican Church, Eziama Obieri in the Nkwerre LGA of Imo state

Nwosu is married to Okorocha’s daughter and ran unsuccessfully to replace his in-law as Governor of Imo State in 2019.

In a daredevil raid, a gang of plain clothed gunmen stormed the church, shot into the air to scare away worshippers and grabbed their quary.

They bundled the thorougly unnerved man into the trunk of their vehicle and whisked him away to an unknown destination.

Okorocha told newsmen that the raiders pushed down his daughter Nkechi and tore the clothes of his granddaughter, Uloma.

The raiders neither arrived in uniform nor drove branded security vehicles, fueling instant speculations that they were kidnappers.

The speculations subsequently set off a firestorm on the internet, giving the impression that kidnappers have laid siege to Imo State.

Witnesses widely shared video footage of the operation, claiming in their commentaries that it was a kidnap.

Imo Police Command spokesperson Michael Abattam however cleared the confusion this afternoon in a statement.

He announced that police personnel actually carried out the dare-devil operation.

“Chief Uche Nwosu was not kidnapped but was arrested by the police,” Abattam, a chief superintendent, said.

Interestingly, the statement showed that police officers from out of State effected the arrest. The State Police Commissioner was informed on the plan.

“Imo state police command is aware of the arrest and presently he (Nwosu) is in police custody.”

He did not say which branch of the Police carried out the raid, where they came from or where Nwosu is cooling his heels in detention.

The statement merely reaffirmed that Nwosu was not kidnapped “by unknown persons/gunmen.”

The Police statement did not however explain why Chief Nwosu was arrested and what he was accused of.

Neither did Abattam justify Police commando-like raid of a local church to pick up and bundle away a suspect in the manner they did.

Nwosu is widely viewed as a proxy in a titanic battle between Gov. Hope Uzodinma and his embittered predecessor, Sen. Rochas Okorocha.

Sen Okorocha toed this line at a press conference in Abuja today where he made the following statement.

:Uche Nwosu, my wife and daughter were at the church for an outing service, when a group of men in police uniform started shooting while the sermon was ongoing.

“In the course of their activities, they pushed down my wife and tore my daughter’s clothes.

“No warrant of arrest. No invitation. We suspected kidnapping at first. Many people were injured while running.

“They were identified as policemen from Imo State Government House by their colleagues attached to Uche for the burial (of his mother).

I got the CP who said that the IGP approved his arrest.

“The shock of such an arrest without warrant and humiliating members of my family is unfortunate.

Most security operatives in Imo know nothing about the arrest. I don’t know what they framed up.

“The IGP could only do this on high-level misinformation from Hope Uzodinma.

“Over 100 gunshots to arrest Uche Nwosu? What kind of ruthless behaviour on an innocent citizen of Nigeria?

“Uzodinma wants to frame me up by all means. Uzodinma has to answer for most of the activities going on.

“Uzodinma has framed up something against Uche Nwosu.

“(President Muhammadu) Buhari should be informed about what is happening in Imo State.

“Hundreds of citizens are being killed in this state.”

The state government has yet to respond to the allegations.