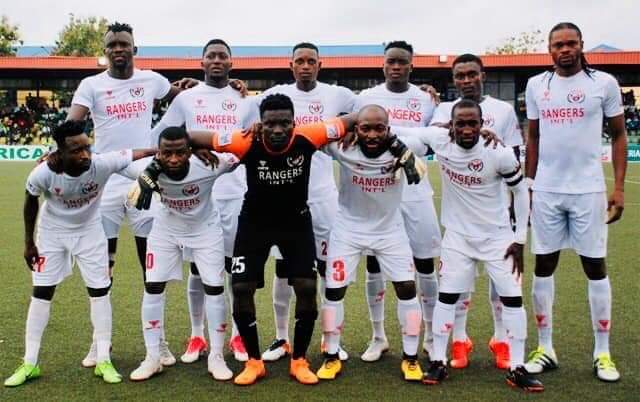 …as Enyimba wins AS Galaxy 2-0

Enugu Rangers International fought hard this evening in Togo to maintain a 1-1 draw with ASC Kara in the first leg encounter of the 2019 CAF Confederation Cup but was denied at the very last minutes when the Togolese went a goal up.

The match, played at the Stade du Kégué, Lomé, started 5.00pm local time and had a Senegalese Referee at the center.

The Enugu team returns home to Nigeria with head held high, to prepare for the crucial return leg which will be played at the Nnamdi Azikiwe Stadium, Enugu on 3 November.

Although the Togolese League Champions were the first to score in the 29th minute of play through Mani Sapol, the Flying Antelopes however wasted only three minutes before their bombardment of ASC’s defence paid off.

Rangers was awarded a penalty in the 32nd minute when Nnamdi Egbujuo was brought down in ASC’s 18-yard box.

Ifeanyi George quickly converted it into the net.

All efforts made by the hosts to score the winner were frustrated by the Coach Benedict Ugwu-led team until the 4-minute added time when Togo eventually broke the tie.

ASC Karaat in the 91st minutes hit the Rangers net again through Nane Pakidami, making it two goals against one, and winning their home game which Rangers at this time, was playing for a draw.

Second leg of the match is at the Nnamdi Azikiwe Stadium Enugu on Sunday 3rd November, 2019 by 4.00pm.

The second leg result in Enugu will determine who qualifies to the group stage known as the money-spinning stage.

Meanwhile, Rangers brother in the competition, Enyimba of Aba today at Aba Township Stadium defeated their visitors, AS Galaxy of South Africa 2 goals to Zero.

The Return leg is in South Africa on Sunday, 3 November 2019.