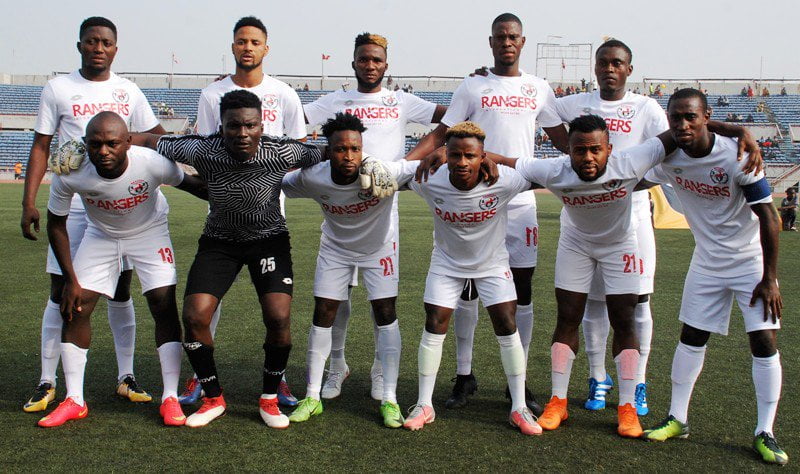 The match was played at the Lafia City Township Stadium.

Rangers newly acquired striker, Israel Abia opened scoring in the encounter when he fired in a free kick from outside 18 yard box, beating the wall in the 4th minute of the play.

However, three minutes later in the 7th minute, Nassarawa’s forward, Chinedu Ohanachom, was fouled in Rangers box and the Referee quickly pointed at penalty spot.

First half ended in struggle by both teams to lead each other, but the desired result couldn’t come till second half.

Abubakar Abdulahi got the winning goal for the home team when Japhet Opubo parried the ball played by Haggai Katoh to the left while still on the ground, Abdulahi flicked the dead ball into the net to send the nearly capacity-filled stadium in jubilation in the 52nd minute.

Nassarawa stourly defended the slim lead, despite spirited and deadly runs made by Nwachukwu who replaced Anas Yusuf in 64th minutes.

Rangers Ibrahim Olawoyin and Ugochukwu Ugwuoke attacked severally into the host defence but couldn’t succeed as the ball either played into the hands of Danlami Umar (goalkeeper) or got blown wild in the air.

In the post match briefing, Rangers’ assistant coach, Mbwas Magut, pointed out gaps in the players’ prosecution of the match.

“We wasted our chances. It’s a game we started very well but gradually allowed the Nassarawa team to win at the end of the game.

“It has not been easy; we know that Rangers fans all over the world have really shown patience and believe in us.

“We believe we will be out of this trouble very soon”.

The Coach also gave a hint that match fatigue may also be playing a part.

“I know that playing weekend and midweek may have affected our players but it’s not an excuse. We know they are humans too”.

On the bench were Nana Bonsu, Kehinde Adedipe and Dauda Alkali Madaki.

Rangers at 24 points remain stagnant on the league table at 16th position with two outstanding matches to be rescheduled by the League Management Company of Nigeria having played 19 matches, won 6, drew 6, lost 7.

Next Rangers match is against Adamawa United this Sunday, 1 March 2020, at the Nnamdi Azikiwe Stadium Enugu by 4pm.