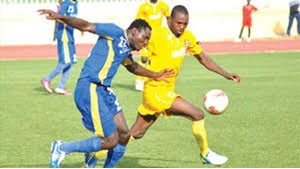 Is the old Rangers’ fighting spirit being rekindled at last?

This was the question on the lips of fans when the team survived an away match in Delta State, playing with 10 men to silence Warri Wolves at the Warri Township Stadium.

The scoreline at the end of 90 minutes was 2-1 in favour of the Enugu Club.

Rangers scored the two goals in the first 10 minutes of play courtesy of Kelvin Itoya and Kenechukwu Agu.

Ironically, Itoya, an indigene of Warri and a former Warri Wolves player drew the first blood in front of his home people and against his former Club.

He did not celebrate the goal, understandably.

He was given the honour to wear the Captain’s band for the Rangers team during the match.

Itoya’s goal came from a cross by Nwokeji to Ifeanyi George at left side of the post; Ifeanyi laid the ball for Itoya who tapped it to the top edge of the post.

The second goal from Kenechukwu Agu was from a free kick awarded to Rangers outside the 18-yard box in the 9th minute. The shot broke through the defensive wall and zoomed into the net.

Warri Wolves after the second goal embraced the challenge and fought back.

In 21st minutes, Tope Olusesi made a very big save by heading the ball out when pressure was high and Rangers goalkeeper Nana Bonsu had been displaced by Wolves.

Eventually, Charles Atsimune reduced the tally in 39th minutes when Samuel Amadi pulled out the ball from the flank which found Rangers net.

Uche John was replaced by Oladuntoye in 30th minutes as a result of injury. Traore Issif also was replaced by Kehinde Adedipe after Kenechukwu Agu had been sent out in 65th minutes for bad tackle. Seka Pascal also replaced Ifeanyi George at 79th minutes.

Rangers Coach Salisu Yusuf jubilated over his first away win since he joined Rangers. He described Warri Wolves as “a strong team but came late”.

Rangers will on Sunday at the Nnamdi Azikiwe Stadium Enugu by 4.00 p.m. host Abia Warriors in Eastern derby.

Other results of Wednesday’s midweek game are:

ride male enhancement pills 3000mg, erectile dysfunction pills over 60, viagra 50 mg for sale, no desire to have sex, viagra landscaping, emerita libido formula, itchy nipples lack of sex drive, how long does 25mg viagra stay in your system, generic brands of viagra online, how can i increase my sex stamina, if you take viagra how long do you have to wait before you can have sex again, black 4k male enhancement, where to buy ed pills without prescription, what can viagra be used for, how much herbal viagra did odem take, cost of ed pills through health alliance, pro plus ultimate male enhancement, magic growth of penis via spell vids, penis enlarge medicine, vigrx plus for erectile dysfunction, oral medication, how to get sex drive up in 21 year old, natural viagra in nature food, canadian pharmacies for viagra, enhancement of male libido, what uis max dosge of viagra 100mg per day, taking half a viagra for fun, viagra cheap no prescription, purple rhino male enhancement phone number, which viagra dose should i take, male low sex drive excessive tiredness, how to increase sex drive 22 year old malw,