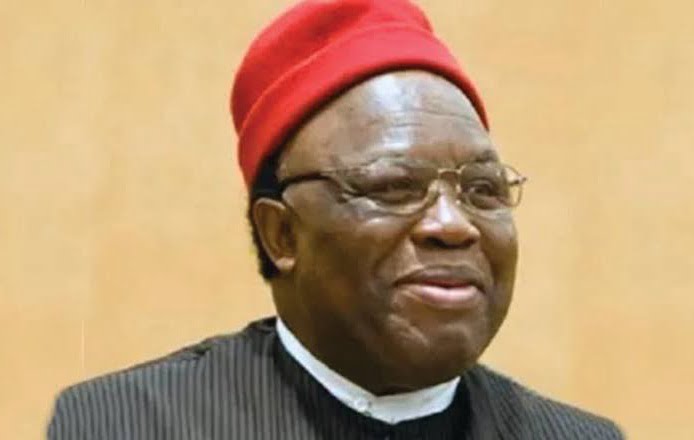 The sociocultural group, Ohanaeze Ndigbo, calls for release of separatist leader Nnamdi Kanu for peace to return to the Southeast.

Imeobi, Ohanaeze’s highest decision making body, issued the plea yesterday at the end of a closed-door meeting in Enugu.

Imeobi deplored “the worsening security situation” in the region and asked the Igbo people to unite and “halt the situation.”

The meeting suggested that releasing detained Igbo youths is a good step to resolve the region’s security problem.

“The release of Mazi Nnamdi Kanu and Igbo youths in detention is the first crucial step towards restoring peace and security.

“We are convinced that the Nnamdi Kanu issue can only be resolved through dialogue,” Imeobi Ohanaeze said.

Here is the full text of the the meeting communique published yesterday, 4 May 2022.

“The Imeobi Ohanacze Ndigbo Worldwide held today, Thursday May 5, 2022 at the National Secretariat under the leadership of HE Amb. Professor George Obiozor, the President-General.

The Imeobi deliberated on a wide range of issues including the January 10, 2021 Ohanaeze election held at Dan Anyiam Stadium, Owerri-Imo State, Insecurity in the South-East, 2023 Presidency, need for our people to acquire Permanent Voters Card (PVC) as well as the Alaigbo Stabilization Fund (ASF).

After exhaustive deliberations on these issues, the following resolutions were reached:

a) That Imeobi congratulates the current National Executive Committee (NEC) of Ohanaeze Ndigbo which emerged through the January 10, 2021 election held at Dan Anyiam Stadium, Owerri, and also commends the efforts of the Ohanaeze leadership in steering the ship even in these trying times.

Imeobi calls on all the Igbo nation to give the executive their full support, which they have earned and deserved. Imeobi also calls on those aggrieved with the outcome of the election to lend their support to the current Leadership of Ohanaeze Ndigbo.

b) That there is need to redouble our efforts towards the ongoing voters registration exercise by sensitizing our people on the importance of the exercise and getting their PVCs where they reside.

e) Ndigbo are irrevocably committed to a Nigerian President from the South-East Zone in 2023.

f) That Imeobi Ohanaeze hereby empowers the President-General to constitute the Political Action Committee amongst others that will achieve the desired results in all the issued raised at the Imeobi.

g) That the President-General, Prof. George Obiozor and the Secretary-General, Amb. Okey Emuchay, MFR or their authorized spokesman are the only officials authorized by the Imeobi to issue
statements on behalf of Ohanaeze Ndigbo Worldwide