Revolution, all over the streets, without Sowore, but it’s just a vehicle! 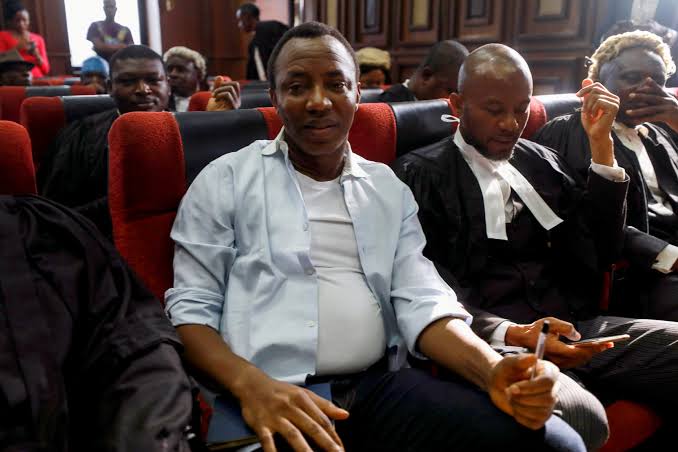 DOES anyone still remember why security agencies are holding Omoyole Sowore, publisher, and presidential candidate in the 2019 election? Sometimes it gets so confusing, especially at this moment when it appears that he is detained to make the point that anyone can be held, without consequences.

Sowore started a new hash tag, #RevolutionNow, urging Nigerians to commence protests. It could be said that his detention was about that call. DSS considered the calls vexatious and stopped them by arresting the convener. After four months of detention by the Department of State Services (DSS), which procured a court order to keep him beyond what the law allows, Justice Ijeoma Ojukwu ordered his release on 6 November 2019. The DSS and the Attorney General of the Federation, AGF, had charged Sowore and his co-defendant, Olawale Bakare, of treasonable felony, before the judge.

The order was observed in the breach, even after the stiff conditions attached to it were eventually met. Sowore was re-arrested by the DSS at the Federal High Court in Abuja on 6 December – less than 24 hours after his release from a four-month incarceration.

Mr. Marshal Abubakar, Sowore’s lawyer, in affidavit, averred that efforts to release Sowore have been futile. Abubakar told Justice Inyang Ekwo that Justice Ojukwu, on 6 November 2019, ordered the release of both Sowore and his co-defendant after their bail conditions were met.

Here’s how he put it.

“That on Thursday, December 5, 2019, this honourable court presided over by Honourable Justice Ijeoma Ojukwu chastised the frivolous and vexatious conduct of the respondents herein” including their “attempt to sit as an appellate court over the order of release made on November 6, 2019 and awarded a cost of N100,000 against the respondent.

“That this honourable court in the course of the proceedings of Thursday December 5, 2019, mandated the 1st respondent to release the applicant within 24 hours.

“That the applicant was released on the said December 5, 2019 at about 7pm.

“That on Friday, December 6, 2019, officials of the State Security Service under the command of the 1st respondent invaded the court.

“That on Friday December 6, 2019, the respondents stormed the court room number 7 of this Honourable Court presided over by Honourable Justice ljeoma Ojukwu in the course of proceedings to effect re-arrest of the applicant without an order of court or an arrest warrant to that effect.”

Justice Ekwo adjourned the case till December 23 for hearing notices to be served on the Director-General of DSS, and the Attorney General of the Federation.

While the fiery exchanges are going on in court, revolution is on the streets. Yes, some vans called Revolution are on the streets. They have been seen in Abuja, and some parade Abuja vehicle registration numbers. Obviously, their message is different from Sowore’s. Theirs could be about the difference the vehicles would make to the automobile industry.

How could Sowore’s “offence” be a rewarding enterprise for others? Would the security agencies stop the use of the vehicles for the placards they are? What would be the official reason for arresting them?

Years back, at the height of General Sani Abacha’s regime, some vehicles appeared on Lagos streets with this sticker, Don’t steal, government hates competition! I thought of what fate awaited their owners if security agencies thought they were sending a message. In that case, it was a sticker, which they could have been told to remove.

Is it fair to hold Sowore for #RevolutionNow when the other Revolution roams the streets unhindered? Freedom of speech breaks new frontiers, daily, mostly unintended.