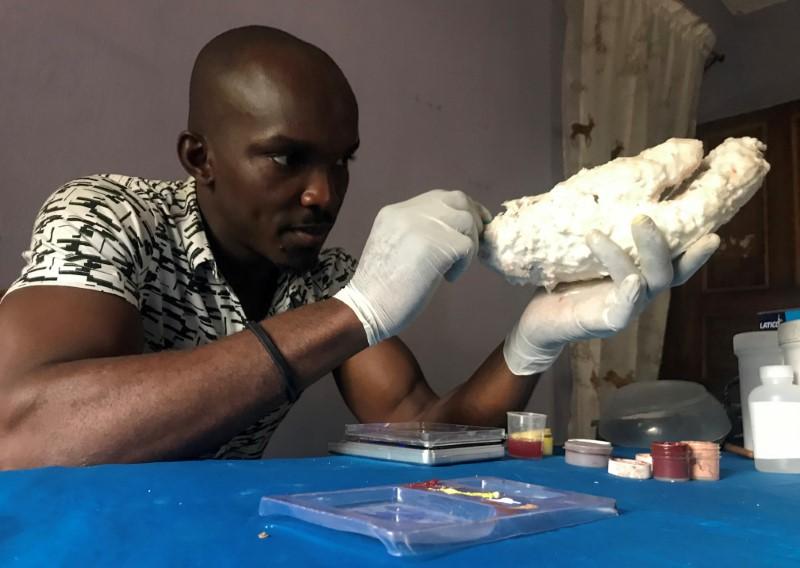 For amputees of color around the world, living with a limb or body part opposite to their natural skin tone is a daily reality. Their community has been largely ignored by an international prosthetics market that caters primarily to white clients.

John Amanam, a 33-year-old sculptor and former movie special effects artist from the city of Uyo in southern Nigeria, set out to change this reality three years ago, quickly becoming a pioneer in designing hyperrealistic Black prosthesis. His work — spanning prosthetic hands, legs, fingers, toes, ears, noses, and breasts — was so rare that he registered a patent over his innovation in Nigeria last year.

Amanam arrived at prosthetics design after his brother lost part of his hand in a sudden accident. It was then that the family realized that dark-skinned prostheses are not available in Nigeria.

“I was never interested in prosthetics before that,” Amanam told Hyperallergic in a phone conversation. “I simply tried to use my expertise in special effects to help my brother.”

Without any formal training in prosthetics, Amanam embarked on autodidactic research to learn the craft. After a year of experiments in his studio, with many trials and errors, he was able to produce a convincing hand prosthesis for his brother, which blended with the rest of his hand.

When Amanam posted a picture of the custom-made hand on his Facebook page, the positive feedback was overwhelming. Requests for prostheses from amputees in Nigeria and other parts of the world started flowing and haven’t stopped since then.

“I quickly discovered that I was the only one around making Black prostheses; not only in Nigeria but in the whole region,” Amanam said.

With a growing demand for his work, Amanam established the company Immortal Cosmetic Art two years ago. It now employs seven workers who make the prostheses by hand. The company has so far served nearly 200 customers from all over the world and there are about 100 more waiting for their turn.

“We had to pause production because of the demand,” Amanam said. “I’m hoping to expand the company and add more technology to the process.”

Amanam’s work has garnered the attention of the international press, with stories by Reuters, Al Jazeera, and other leading publications in Africa and around the world.

“The production of Hyperrealistic prosthesis is not just a Nigerian problem,” Amanam explained. “Customized prostheses that match the skin color are rare all over the world. In the case of Africa, all the prostheses are imported from abroad.”