Shouldn't we apologise to Amaechi? 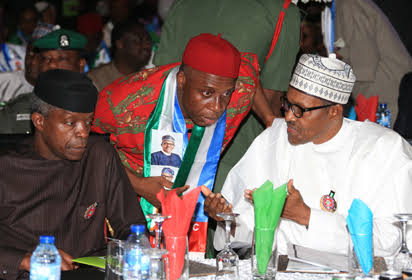 ROTIMI Amaechi,  Speaker of Rivers State House of Assembly for eight years, two-term Governor of Rivers State and second term Minister of Transport, deserves an apology from Nigerians who don’t know that Daura is in Nigeria. He is understandably angry.

Amaechi knew they would not applaud his wisdom for locating the university in Daura, one of the two cities in Nigeria that has produced a military Head of State, as well as the President, with the added distinction that in each case, the same person was in charge under different titles, Olusegun Obasanjo from Ogun State, and Muhammadu Buhari of Katsina State.

As an aside, the similarities include the fact that under the leadership of the duo, there were efforts to extend their tenure to an extra term that the Constitution does not permit. To their eternal credit, both shut down the moves to grant them the extra tenure.

One day, we would come to the understanding that Kajola and Daura are in States with illustrious personalities, and that though we were not taught that personalities were one of the factors in the location of a business, an Honourable Minister has cleared our ignorance.

Back to the main business. Rt. Honourable Minister Amaechi chose the groundbreaking ceremony of the Transportation University in Daura, to lament his woes at the hands of Nigerians who have questioned the choice of Daura for the project. He explained that the university was his “attempt at responding to the question of how to maintain and manage all the infrastructure we are building and realised that education is key.” Amaechi, a great patriot, spoke for the attention of President Buhari, who may not know what the Minister was going through with unappreciative Nigerians.

He told the story of the three conditions he gave the companies for the rail contracts to be signed.

“I engaged the companies; the first engagement was when they were constructing Lagos-Ibadan. They were not so keen at spending their funds to build a university for Nigeria until I refused to sign the contract for the Lagos to Ibadan railway,” he said.

“The first thing is to take our children to China and train them by giving them a first degree in railway technology. Today as I speak, 60 of our children are in their second year and we thank CCECC and 90 are on their way to China this week, making it 150.

“The second is that, if we must sign the purchase of locomotives in China, they must build a factory where we can construct for coaches, locomotives and wagon and today at Kajola that factory is being constructed.

“Finally, I insisted on the University of Transportation and today we are here for the groundbreaking of the University and for all we are grateful to CCECC and the Chinese government.”

The choice of Kajola as the fame factory for the rail equipment is another coincidence. Kajola is in Ogun State, from where Obasanjo and Vice President Yemi Osinbajo hail.

Kajola was the plank of Amaechi’s defence of the university in Daura.

“When we sited the factory at Kajola, there was no noise, nobody debated about it, nobody abused us for it unlike the site for the university,” Amaechi lamented before the President in Daura.

A furious Amaechi understands that, as Minister, it was beyond Nigerians to scrutinise his work. Nigerians are slow to understand that an Hon. Minister answers to the President, not to Nigerians, not to critics, not even to his or her own conscience. If he or she pleases the President, he or she has done well.

The critics can build their own rails, locate their own universities wherever they please, but these resources that come under the management of Amaechi, as the Minister of Transport, must be dispensed as the Hon. Minister deems fit. And who can fault his logic?

“Daura is in Nigeria, it is not in any other part of the world. It is not in the Niger Republic, Biafra or Mali, it is in Nigeria. So, what is wrong in siting the University of Transportation in Daura? I have no regret siting this university where I have sited it, it is not because I want to get any gain,” Amaechi said.

One day, we would come to the understanding that Kajola and Daura are in States with illustrious personalities, and that though we were not taught that personalities were one of the factors in the location of a business, an Honourable Minister has cleared our ignorance