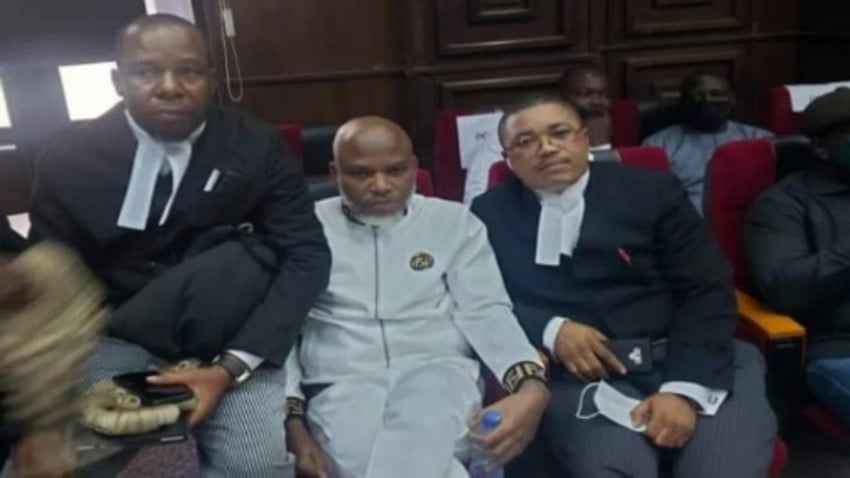 Of what significance is Mazi Nnamdi Kanu’s N1billion win today at an Abia State High Court presided over by JudgeBenson Anya?

An Abia High Court today asked the federal government to pay Kanuu N1.0billion as damages for violation of his fundamental rights. Government is to also tender a public apology to Kanu for the invasion.

Barrister Aloy Ejimakor said in Umuahia after the judgement that the ruling will radically affect Kanu’s Abuja trial for treason.

Other lawyers suggested that this may account for why government filed eight additional charges against Kanu today.

The Army invaded Kanu’s father’s house in Umuahia in September 2017.

Kanu managed to escape from the deadly assault, and subsequently bolted from Nigeria.

Government accused Mazi Kanu of jumping bail and thereafter mounted a global manhunt for his re-arrest.

The Abia Judge ruled that Kanu did not jump bail but rather escaped from a military assault.

The apology to Kanu, he said, is to be published in three national dailies.

However, the judge disallowed another request to censure government for arresting and forcibly transporting Kanu back to Nigeria.

The judge said the request was beyond the powers of his court to consider.

Kanu’s lawyers expressed satisfaction with the judgement as it disproves government claims that Kanu jumped bail.

They promised to take the ruling to continue with the cases in Abuja and Kenya, where a dual battle is being waged to free Kanu.

On his part, Army lawyer, Amos Tori, told newsmen that government would study the judgement before disclosing their next move.

Meanwhile, government today increased the charges against Kanu from seven to 15.

The charges include treasonable felony which is a capital offense that could also be commuted to life imprisonment.

Lawyers on both sides complained about delay in serving papers to each other, which forced the judge to adjourn sitting today.

The defense team, now led by a senior advocate, Chief Mike Ozekhome, objected to the proposal that the trial should commence immediately.

Ozekhome said the defense was only served yesterday with documents on the additional charges thus denying them time to study the new charges before coming to court today.

At any rate, he said the court should hear and rule on two pending applications before going to trial.

The applications are for the release of Kanu on bail, and to dismiss the original charges against Kanu because they were defective.

On his part, lawyer representing government, Shuiabu Labaran, also objected to the hearing of the applications on the same grounds.

He said he was similarly served with two defense applications yesterday and needed time to study them before responding.

The judge, Binta Nyako, agreed with Chief Ozekhome that the applications should be heard first before the trial.

She however said she is not disposed to hear the application for bail today.

Accordingly, she adjourned the case for 16 February 2022 to consider the defense applications.