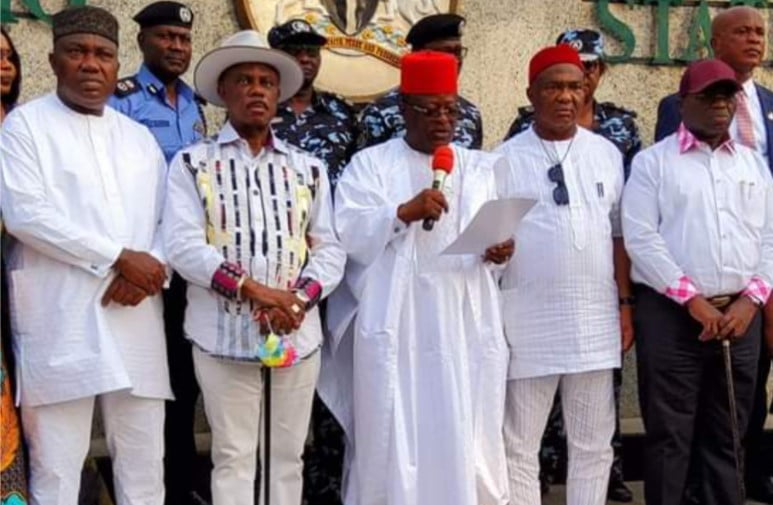 The decision was high point of their first ever Regional Security Summit held today in Owerri, the Imo State capital.

Ebubeagu coordinates the different state vigilante outfits in region from an operational headquarters in the City of Enugu.

A team of security personnel, government officials, and “relevant stakeholders” will oversee the work of the outfit, the Governors said.

The Governors announced their intention to confront recent upsurge in crime in their region “as one united zone.”

The goal, they said, is “to fight and flush out criminals and terrorists from the zone.”

They condemned rising crimes as arson and murder in police stations, freeing of detainees, and assault on farmers and herdsmen.

At the same time, they doubted the effectiveness of mobilizing police monitoring groups to deal with the local situation.

Instead, the governors advised the police high command to allow police zonal and state commanders to deal with emerging issues.

They asked the police to interview cultural and religious leaders of the region to gather useful intelligence in the region.

On their own, they resolved to invite the skills and support of “business community, bureaucrats, and the intelligentsia” to assist the work of security operatives.

The Security Summit will become a quarterly meeting to be rotated among the five states for hosting, they said in the communique issued at the end of the meeting.

Public commentators and well-meaning citizens have pressured the governors to convene such a summit to find solutions to violence rocking the region.

The meeting was attended by the Governors of Abia, Anambra, Ebonyi, Enugu and Imo States.