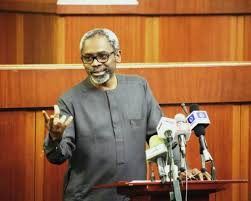 No one disputes that the older Gbajabiamila, first Chair of Surulere Local Government Area – the constituency the son represents – deserves a birthday bash. The contention is the content and context of the celebration.

ORDINARILY, there is nothing wrong about Olufemi Hakeem Gbajabiamila celebrating birthdays wherever he pleases. But Femi Gbajabiamila, as he is more famously know, is the Speaker of Nigeria’s House of Representatives, the fourth in the nation’s power pecking order, and  Member of the House of Representatives since 2003. In that stretch, he was Minority Leader of the House for eight years before he became Speaker in June 2019.

There is nothing ordinary about him anymore though he seems to be the only one not to have realised this. It shouldn’t come to him as a surprise that Nigerians are still in shock at the news that he was hosting a week-long 90th birthday anniversary for his mother Alhaja Lateefat Olufunke Gbajabiamila.

No one disputes that the older Gbajabiamila, first Chair of Surulere Local Government Area, the constituency the son represents, deserves a birthday bash. The contention is the content and context of the celebration. The Speaker’s defence of the celebration failed woefully to understand the feelings of Nigerians about extravagance in the midst of the grinding poverty that is hurting Nigerians.

A previous birthday party put Mr. Gbajabiamila in the news two years ago. Though he was not the Speaker at the time, few would forget the golden-plated G-Wagon jeep that he gave his wife for her 50th . The number plate was

Many writers spent weeks speculating on the cost of both the vehicle and the haute couture attire that the Gbajabiamilas wore to the occasion. Some of the figures mentioned as the costs of the items were too outrageous to bear repeating here.

Once again, we are back to calculating what could have been spent on the Dubai birthday celebration of his mother. Mr. Speaker insists that it was a purely private family affair with a few friends in attendance. The fact that no figures were released for attendance weakened the denial that over 300 guests were ferried to Dubai for the bash.

As he did before, emphases have again been made that public funds were not used in hosting the party. Mr. Speaker’s understanding of how the public sees public funds may be central to the disagreements that have arisen over this.

Femi Gbajabiamila as Speaker of the House of Representatives is a public figure who is maintained at great costs from the public purse. The concepts of these costs vary and could include trips with official vehicles, including aircrafts from the presidential fleet, and security provided at costs to the public.

Thus, being a public officer means that he is expected to use these services in manners that align with public perception of the conduct of public officers in their various capacities. If Mr. Speaker is impressed by this argument, he is yet to show it.

The points of order that Mr. Speak has to note are –

You are is too public to be private

Gbajabiamila has seen 17 years in the House of Representatives. There are few things about him that are still private, and none of them was an issue in the outrage about the birthday celebration of his mother. If he understands how very public he is, it will help in the manner he conducts himself, going forward.

When you serve the public, there are expectations that you would have a feel of what citizens go through in the race for survival. Times are so tough that the public has no sympathetic ear for explanations from public officials who hold ground-breaking parties. There is an increasing distance between the public and those who serve them. The public sometimes think these celebrations stamp the decisions of public officials to do as they please regardless of what the public feels. People are suffering without any hope in sight. Hunger, insecurity, illnesses, unemployment are ravaging. Mr. Speaker is living above these circumstances, and flaunting it.

What is it about birthdays?

Two controversial birthday parties in two years mark the Gbajabiamila family as show-offs. The loudness of these parties remains the contentious matter. People know the costs of these celebrations – they count guests, they remember travel costs and accommodation. They arrive at their own conclusions hence these contentions. Whether the resources are pooled from family members or friends, the Speaker would not escape being seen as the one who sponsored them.

Anything the matter with Dubai?

Is there anything that commends Dubai to Nigeria’s big men and women? What would have been wrong if the celebration was in Lagos and the billions of Naira exported abroad is spent locally? Should Alhaja’s friends and families not have been around her as she celebrates?

Time is ripe for Mr. Speaker to know that the public – including the voters in Surulere I Constituency that he represents – have higher expectations from him. Birthday parties are not among the expectations.