The Paramount Salesman of A Generation takes A Farewell Bow 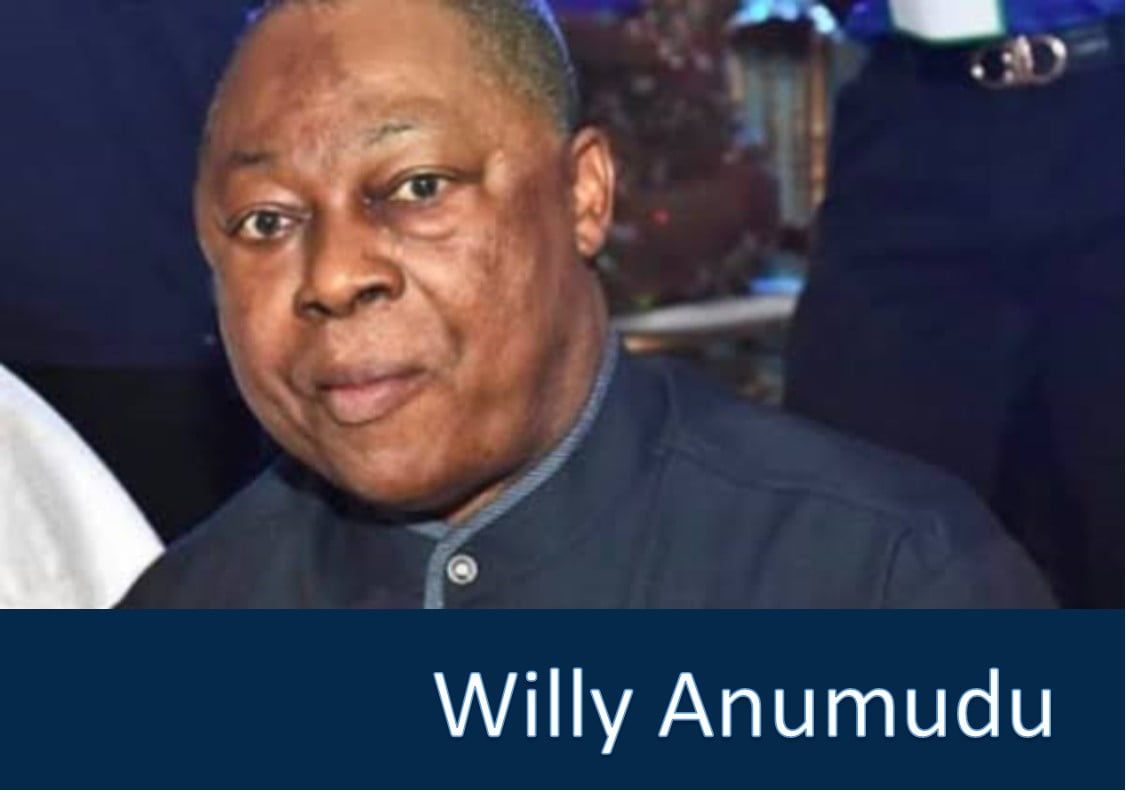 Prof. Pat Utomi pays a moving tribute to a great and life-long friend, Chief Willie Anumudu, who passed on recently

“Two of the ICL people … regaled me with stories of the Whizz salesman at the firm who could sell you a shirt even when he, himself, was walking around barechested. It turned out to be Willy.

The news came like a bolt from a stormy Sky. Brother Willy had made his last Sale. But it was not closing Bell time at the Exchange, I thought to myself , so it could not be true. But Chris Asoluka assured me it was true. A friendship that began in October 1973 had closed so suddenly in April 2020 in a time when Self Isolation got in the way of the natural reaction of just jumping in the car and going past a few streets to his home. That should be my response to such news. But alas, I was locked down, locked up and locked in..

William Anumudu…Willy…Brother Willy…Pa Willy….Willie Remembers…whatever name we called him, was my classmate, a remarkable friend, a great guy and a jolly good fellow. But he was also the Paramount Salesman of my generation.

To look back is to sulk. It is to laugh. And it is to cry. Oh those years of innocence. How we lit up the sky like a flame of dreams in our determination to remake our world.

The bonds grew thicker in 1974 when all the Male Sophomores at the Nsukka Campus of the University of Nigeria had to live off campus in Zik”s Flats where we made enough noise to disturb the rest of our Living Legend neighbour, The Rt Hon. Dr Nnamdi Azikiwe, the Zik of
Africa. The main glue was the bus service that ferried hundreds of us back and forth the campus.

The stars of jolly rides were clear. The super star was the lead Bus Driver. Falanges, as we hailed him. The talkative Lagos boys like me kept the bus entertained with gists and at our command Falanges would bump the breaks of the Marcolo Polo Mercedes Benz Coach which would rock around in a motion swing that brought hailing even from the more mild mannered older men who entered the University in 1967 but lost years to the Civil War and had less tolerance for the rascally small boys. The Aba boys, as we called the Imo group led by Willy, Lucky and Co played conductor and would chant Patito at my signal to Falanges.

Inspite of us we graduated.

The day NYSC ended I left for Graduate School in the US. Done with that towards the end of !982, departing same day my PhD thesis was accepted, I arrived into a Surulere in Lagos where Willy and Co held court.

While I was gone Willy had finished NYSC and spent a little time working for the Plateau State Government before relocating to Lagos to work with the Business Machines Company ICL. International Computers Ltd had a crop of very smart young Nigerians on the payroll. Two of the ICL people were my Secondary School mates from the South West who had returned from University education in England. When we got together they regaled me with stories of the Whizz salesman at the firm who could sell you a shirt even when he, himself, was walking around barechested. It turned out to be Willy.

In those early 1980s there was a Close in Surulere called Mogaji Close. It had some very interesting Residents. One of them was a smart and flamboyant gentleman with a magnetic persona.Chris Asoluka generated traffic. People came to No.5 Mogaji Close for different reasons. Some because they enjoyed the cerebral conversations in Chris’ Apartment and others because they knew some attractive young ladies lived upstairs, but they would not admit it. well.. I came for both. why do things in half measures. But I could argue that I also came because Willy Anumudu lived next door.

Chris was the perfect host. In the afternoon, it was Patito’s Gang and I carried on about the policy challenges in Nation Building. In the night it would be party time and the wonderfully endowed young ladies just appeared from nowhere. Willy, by now an Entrepreneur would march in to protest these young ladies blocking the entrance to his house with their cars. Then he would allow himself to be persuaded to show mercy by joining the revelry. We were all Bachelors then.

Willy made great success of the Motor Business. He also gave back generously to society.

What amazed me the most is that the Aba boy became a Lagos Socialite. Where and how does that happen. Where we, the original Lagos boys fled from, Willy dared.. He would be the toast of parties and a regular on the celebrity pages. Yet he never lost the simple touch and warmth towards his friends. At a point our energies went into building Aka Ikenga as a Think Tank of Igbo professionals. He gave that too his best. Ever practical. He networked his way to solving problems and had become like water without enemies.

Brother Willy, Eze Igbo Ikoyi. I had boasted that I would soon retire to the heartland, commuting between Enugu and Ibusa to nourish what was left of life, and coming to Lagos once in a long while to pay tribute to you the bona fide Ezeigbo Ikoyi, but here we are with no choice but to yield to the creators plan and purpose. How was I to know you would not be living in Ikoyi at 80?

My wife Ifeoma, and our children who went to the same schools as yours, join me in wishing you God’s speed and warm embrace for the good and faithful servant, and in wishing Nkiru and the children, Uzoma and siblings fortitude to cope.

Travel well to the big market in heaven and may God’s angels escort you into paradise. You came, you saw, you struggled and you triumphed.

Patrick Okedinachi Utomi, Professor of Entreprenneurship, and SPEEB, is founder of Center for Values in Leadership (CVL).