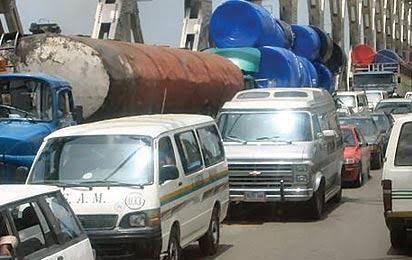 Southest-bound commuters are getting stuck at Asaba at a traffic gridlock building up from the Onitsha end of Niger Bridge.

This year, the traffic buildup at the Southeast side of the Bridge is developing less than 10 days to Christmas.

Enugu Metro checks however show that this gridlock is caused by a number of security checkpoints at the Onitsha end.

The security forces at this end include the Police, Customs, the Army and road traffic managers.

They delay traffic by checking goods in transit, vehicle papers and sometimes accosting and quizzing passengers.

As at yesterday, traffic buildup at the western end of the Bridge stretched backwards to Asaba, the Delta State capital.

This contrived traffic gridlock has become an annual ritual. It progressively worsens at Christmastide as Igbos return to the Southeast for their traditional December vacation.

From Monday, 13 December, motorists report spending an average of three hours to cross the 1.4 kilometer bridge into Onitsha.

Yesterday, many of them shot and posted video clips of their expetiences on the bridge.

They pleaded with the Governor of Anambra State to engage with the security forces to arrest the situation.

The River Niger Bridge is the only gateway to the southeast from the western part of the country.

A second bridge is under construction to ease traffic on the busy 3-lane bridge highway commissioned in December 1965.

The issue of numerous security checkpoints on west-east roads during the Christmas period has defied logical explanation.

in December 2019, one motorist counted 75 of such security posts erected on the highway from Lagos to the Onitsha Bridge.