What’s wrong with a group purchasing forms for aspirants? 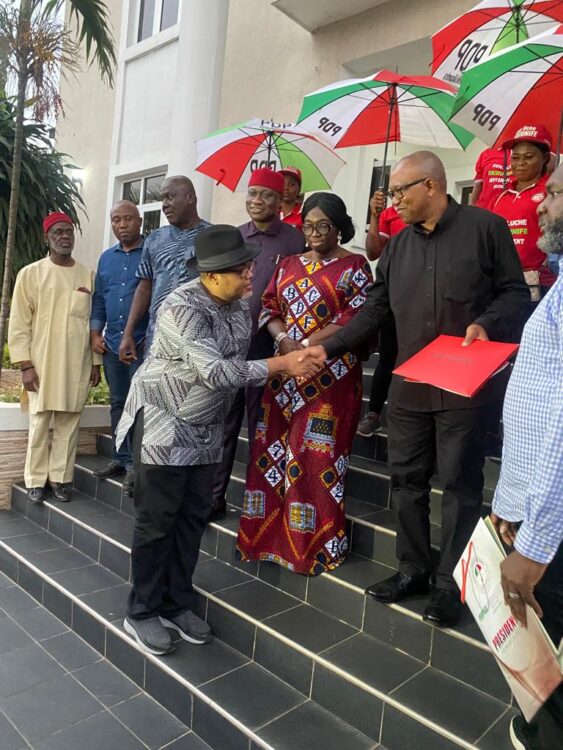 My straight answer is no.

Yesterday, I was at Onitsha to witness the handing over of the Peoples Democratic Party, PDP expression of interest and nomination forms to HE Peter Obi. Of course, those were for the Presidential Race.

The forms were purchased a day earlier from the PDP National Secretariat in Wadada Plaza Abuja by a group known as Like Minds For Peter Obi. They’re a collection of young professionals from all fields of endeavour across the country.

Led by Daniel Wilbert, who hails from Warri, Delta State and practising in the energy sector, the group said it was their strong belief that Obi, based on proven records of performance while he was a governor and evident positive antecedents, has all the necessary abilities to positively turn our sinking country around, that pushed them to rally round him in full support for the journey to Aso Rock.

Receiving the forms, the man we also call Okwute expressed gratitude to the group for their belief in him to go as far as purchasing the very expensive forms, assuring that he will prove to them and other Nigerians that such level of trust they place on him is not misplaced.

“My formal declaration is coming in a few days, where I will roll out my manifesto and I will promise before hand that I will not say a word I won’t fullfil if given the chance. I have so much interest in the future of the youths of this country. I will also assure you straightaway that I am coming with a blueprint that will turnaround this country.”

Based on voices, particularly those of the former president, HE Olusegun Obasanjo, being quoted as kicking against aspirants that groups, particularly youths, purchase presidential nomination forms for, it has become necessary to look deeper into such gesture by Like Minds For Peter Obi.

If I got it right, the former president was accusing the aspirants of purchasing the forms via these various groups to hoodwink the people into belief of popular acceptance.

In response to OBJ, the Peter Obi I know is too polished to get involved in that low-level trick to deceive.

I don’t know if any of the aspirants played such debasing pranks and I lack proof to assume any did but if they’re all on the honest path, there’s absolutely nothing wrong in coming together, or even individually, to support their choice aspirants/candidates.

However, I will concentrate on the man, who I have 100% certainty that his first agenda for this project is honesty at all levels. Peter Gregory Obi is not a man who will lie to the nation, whatever the stakes.

President Barrack Obama came to power via public donations. It is permitted in any democracy and Nigeria’s is no exception. It reduces the money such aspirants/candidates will spend while campaigning and a conscientious man like Okwute will know that it is a clear act of bondage to the people to reciprocate with desired performance.

Based on his national acceptance from the moment he declared, I am very certain that many more groups will selflessly support his ambition to the very end.

Nigerians have seen a man of genuine ability. Definitely, most wouldn’t wish to miss this chance.