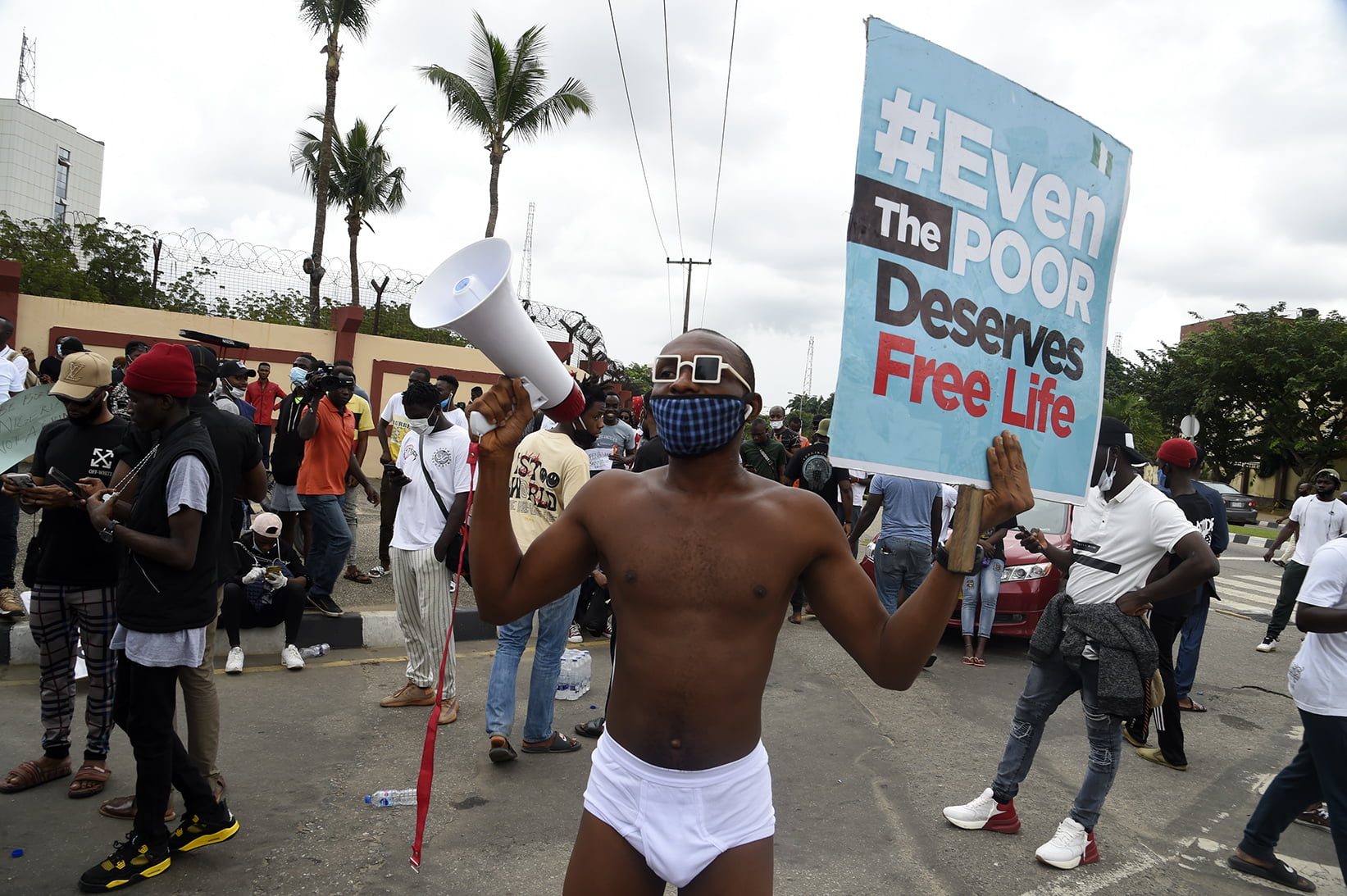 Chuma Uwechia reflects on what the Nigerian youth needs and asks leaders to show food faith by negotiating a fair and equitable restructued nation.

If the world was riveted by the #EndSARS protest that successfully fought for the disbandment of the Special Anti-Robbery Squad (SARS) of the Nigerian Police for its high handedness, extra-judicial killings and corruption, it was more about the audacity of the Nigerian youths who took leadership in a fight for their lives and future. In contrast, however, was the Pro-SARS rally in Borno State by citizens expressing displeasure over the disbanding of the police squad. The Pro-SARS agitation was swiftly supported by Governors of states in the Northern part of Nigeria and other leaders.

This support for what started as apolitical protest thrusted the issue into the realm of the old political divide between the Northern and Southern Nigeria. It reminded the nation of the distinctions between the internal governments of the two former British protectorates. One had indirect rule and the other direct rule.  So while SARS was terrorizing people in the Southern part of Nigeria, it seemed to be contributing immensely to the fight against terrorism in the North. Different strokes, one country.

Unwittingly, this contradictory posture of the Northern and Southern states of Nigeria on the SARS issue has clearly become one of the strongest opening arguments in support of constitutional restructuring – that the various constituting zones of the country have different political and economic cum social needs and should be allowed to develop according to their levels of want, pace and comfort. Forcing Usain Bolt’s siblings to run at the world’s fastest man’s speed will amount to cruelty, while requiring Usain to crawl at his siblings pace will stunt his development and natural talent. The Bolt family probably allowed their children to develop according to their natural endowment and talent, while complementing each other. That should be the perfect family arrangement borne out of love. That should be the Nigerian arrangement. The agitation for restructuring is not an indication of animosity, intolerance and hatred among ethnic groups.

With a restructured federal constitution, policing like other similar items will return to the concurrent legislative list. There will be a federal police force with exclusive jurisdiction on federal roads and federal territories. A state police force with state jurisdiction will exist side by side the federal police as currently practiced in the USA.  Of course, there will always be collaboration between the federal and state police in matters of mutual interest. That structure will permit the Northern states to have and keep their own equivalent of the SARS or invite the federal police to deploy SARS only in the Northern part of Nigeria.

A restructured Nigeria will eliminate the unnecessary friction, rancor, bitterness, contempt and enmity between the Northern and Southern parts of Nigeria. It is not an incongruity. While it will not be a cure for Nigeria’s multifaceted problems, it will douse the flame of tribal polarization currently tugging at the nation’s body fabric. By eliminating or minimizing one of our most serious national problems, we will be able to focus attention on resolving the remaining issues, one piece at a time.

Admittedly, the need to restructure may not have been very obvious if the federal government was proactively attacking our national problems of security of life and property, economic inequality, youth unemployment, lack of social and health infrastructure, the huge cost of government, while ensuring diversity, equity and inclusiveness, with the same speed it responded to the #EndSARS protest. The seeming lack of sensitivity in appointments to federal offices and siting of national projects to reflect federal character have dangerously polarized the nation.

All these flow from the obvious vacuum in transformational leadership in the nation which could not have been made more glaring than with the bold decision of youths to assume the mantle of leadership and fight for their lives with #EndSARS protest. And the youths fought positively to the world’s admiration. We should remember that without government support, the youths stormed the world’s musical scene and are riding on top of the charts due to their hard work, ingenuity and resilience. They make waves in international sports and the professions based on personal development of their talents and discipline. They are now poised to take back their country from the morass into which it has fallen. Definitely, this won’t be their last incursion to force the government out of slumber to resolve our societal problems.

Although, there has been a steady flow of political and religious leaders pandering to the spotlight to release statements about the need to restructure the country, none has done the needful. As of date, no group, political party or individual has sponsored any bill to restructure the country, which raises the question of whether our federal representatives/senators are under performing despite their jumbo emoluments. It does appear that people are more content with just calling on the president to restructure the country, rather than appropriately pressurizing the National Assembly to do their necessary legislative work. We understand the persuasive power of the presidency, but it is not President Buhari’s job to legislate. It is our job to lean on our federal representatives and senators to do their job. If a bill is eventually passed to restructure and presented to the president for assent, then we can move on President Buhari but not before.

The need to restructure may not have been very obvious if the federal government was proactively attacking our national problems of security of life and property, economic inequality, youth unemployment, lack of social and health infrastructure, the huge cost of government, while ensuring diversity, equity and inclusiveness, with the same speed it responded to the #EndSARS protest

In this era of failed governance, the nation appears to be begging for the emergence of statesmen in the mold of late Chief Dr. Nnamdi Azikiwe to show what real leadership looks like by cobbling a bipartisan constitutional amendment and restructuring agreement. It is disappointing that the two main political parties with over 90 percent domination of the National Assembly seats have not felt the pressure and crunching weight of the yearnings of millions of Nigerians and businesses depending on them to pragmatically resolve the fundamental constitutional problems destabilizing the country in a bipartisan manner. Political party affiliation should not always dictate our positions on policy matters that require nuanced judgement. There should be no room for binary politics in matters of national health.

The question remains if Nigeria is becoming a mission impossible.  In 1978, when the late Owelle of Onitsha, Chief Dr. Nnamdi Azikiwe was being wooed into partisan politics by the various registered political parties, he famously responded that he would first of all play the role of the father of the nation, reconciling the children where conflict existed before dipping into partisan politics. He was at the forefront of the fight for a united Nigeria at independence and did everything within his means to keep the dream alive. The unrepentant nationalist and pan-Africanist was always for reconciliation and building alliances, whether with the military, Northern Peoples Congress or National Party of Nigeria. For him, politics was the art of compromise and he struck when the iron was hot to get a deal for the greater good of the country. He believed that there was no higher calling in terms of a career than public service, a chance to make a difference in people’s lives and improve the nation.

According to Troy Gautier, “negotiated solutions are almost always preferred to unilateral ones.” Today, we need pragmatic politicians and a change in strategy to deal with the fast changing realities in Nigeria before the curtain falls. We need a detribalized, secular and responsive leadership at all levels of government that will be mindful of our ethnic diversity and inject the much needed equity and inclusiveness in governance to calm a highly polarized nation. We need a summit of the two dominant parties, APC and PDP to work together to find a fair and equitable resolution to the most pressing constitutional issue of restructuring and move the nation to true federalism. We need a constitutional amendment that will reduce the size of the National Assembly and State Houses of Assembly.  We don’t need a bicameral government. We need to slash the jumbo remunerations of political office holders; state governors’ emoluments and retirement packages should be drastically reduced. We don’t need a return to former regions with the consequential instability that will ensue with the dismantling of states. The states should stay while the unviable ones should be allowed to work out merger arrangements with the nearest viable state.

The Nigerian dream remains a strong and viable possibility over all other options. We just need to take back our country from the brink.  We need a clear and equitable path forward.  Our youths need a functional economy to grow and realize their talent and full potential and a springboard to the global arena. They want a detribalized and expansive economy with adequate employment opportunities. They need peace and security of life and property. They want a reason to be hopeful about the future, their future.  It is about time we went over and beyond to negotiate a fair and equitable, restructured state in good faith. That will keep the Nigerian project alive or we can negotiate an amicable burst. The choice is ours.